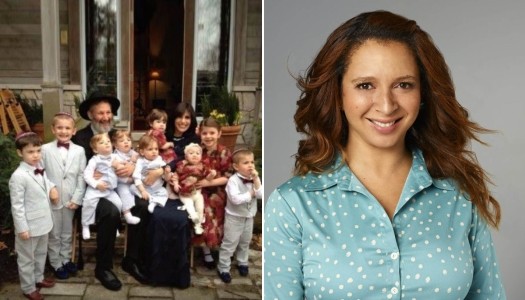 Lieba Rudolph, a well-known writer and longtime member of the Chabad community in Pittsburgh, wrote the following inspiring story of Hashgacha Protis on her personal blog, Pondering Jew, describing a chance encounter she had with a relative of hers, celebrity actress Maya Rudolph, at a car wash in Los Angeles:

The woman was sitting on the curb outside the car wash, talking on her cell phone. Elkie was sure we had the right person.

“One second,” she said to the person on the phone. She looked up at me, slightly annoyed by the interruption.

“I’m Lieba Rudolph, Billy’s wife,” I announced with a smile.

“I gotta go. I just met someone from my family.” I was happy she was so excited.

With her identity confirmed, our daughter Elkie appeared, trailed by her daughter Leah and our daughter Rivky. The woman indeed was our famous relative, the actress Maya Rudolph. Maya’s father is first cousins with my husband. Their fathers were brothers who both grew up in Pittsburgh.

Of course, none of us could believe the amazing “coincidence” of  our meeting. I mean, what’s the likelihood that Rivky and I would arrive in LA on that day, then go with Elkie to that car wash to get her car cleaned for Pesach, at exactly the time when Maya was there? (To my knowledge, Maya wasn’t cleaning her car for Pesach which makes it even more unlikely she would be there at that moment.) And what is the likelihood we would all be at the car wash exactly when, back in Pittsburgh, much of the extended Rudolph family was gathered for the funeral of one of the two original Rudolph sisters?

As a Chassidic Jew, I strive for a life where G-d is “present” through hashgacha pratis, divine providence, where I recognize His involvement in everything. Not every encounter is meant to be life-changing, but none is accidental either. And some, like this one, are unusual enough to be seen as a sign of His clear presence, which, ideally, strengthens my ability to recognize Him even more.

Thanks to Maya, we had another hashgacha pratis moment last week.

Because Maya’s a successful actress and because Maya also had an African-American mother, (the late singer Minnie Riperton),  she was recently selected to be profiled on the PBS series, “Finding Your Roots.” I had never heard of the show before Maya’s involvement, but I understand that it’s meant to fascinate audiences with the discoveries found through researching the diverse ancestries of famous people.

One thing I know for sure: “Finding Your Roots” doesn’t skimp on its efforts. A few months ago, Zev and I spoke on the phone with a researcher named Hannah. I couldn’t relate to her excitement in learning where and when some great aunt we never heard of graduated from high school. And that’s just one small discovery made on Maya’s father’s side; they were expending the exact same effort to trace every detail of her mother’s ancestry. (“That’s Hollywood,” Zev shrugged when I expressed my disbelief.)

We saw the fruits of their labor last Friday, when Zev received a stream of emails from the show’s researchers. After months of exploring the Rudolph family, they sent copies of immigration records, wedding announcements, death certificates–whatever they found.

They topped it off with an extensive Rudolph family tree.

Up until last Friday’s emails, the Rudolph family tree went up only to Julius Rudashevsky, the patriarch, who came to America as a stowaway at age eleven. Julius never spoke about the family he left behind in Vilna, to the extent that nobody even knew his parents’ names. That is, up until last Friday.

When my husband and I first saw Julius’s father’s name, we were stunned. We knew that parents have ruach hakodesh, divine inspiration, when naming their children, but it looks like G-d wanted to show us proof.

When our second son was born, we were still giving our children English and Hebrew names. We liked the name Julius for his English name and appreciated that we were also naming him for his great-grandfather. But we couldn’t use Julius’s corresponding Hebrew name, Yehuda Avraham, because our older son was already Mordechai Yehuda and my father, who was still living at the time, was Avraham. We liked “Dovid” as a middle name–it was my husband’s mother’s father’s name–and needed a good Hebrew first name to go with it, something close to “Julius.” We asked our rabbi, Rabbi Yisroel Rosenfeld, for his suggestions. Wait, we thought, “Yisroel” is close to “Julius”–could that work? Absolutely, we all agreed. That’s how our second son (now known as Izzy) was named Yisroel Dovid.

We would have continued thinking Yisroel Dovid was an original name if not for Maya’s profile on “Finding Your Roots” and the researcher’s email showing the updated Rudolph family tree. Because the researchers apparently discovered that the name of Julius Rudolph’s father was Yisroel Dovid Rudashevsky.

Unbeknownst to us, Yisroel Dovid was already a Rudolph family name, a name that continues through our son, Julius Rudolph.

There’s always much more going on than I know, but I’m grateful when I get a peek behind the scenes. If a family tree falls in my email forest, I’m meant to hear it. And to recognize where it really came from.