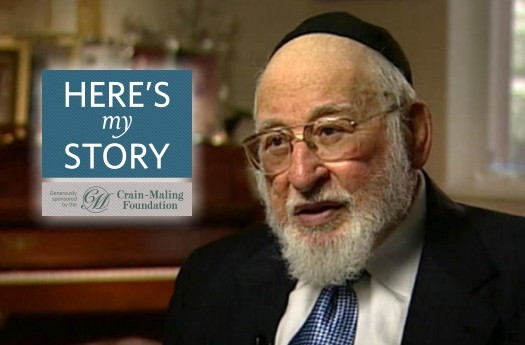 Rabbi Ben Zion Shenker is a world-renowned composer of Jewish music with more than 400 melodies to his credit. He was interviewed by JEM’s My Encounter with the Rebbe project in his home in Brooklyn in April of 2010.

My name is Ben Zion Shenker. My parents came to the United States in 1921 from the Lublin area of Poland, settling in New York, where I was born and raised.

When I was about 13 years old, a famous cantor by the name of Joshua Samuel Weisser heard me sing in our synagogue – this was a Polish shtiebel in Bedford Stuyvesant – and he asked my father if I could join his choir. At first, my parents wouldn’t give permission but Cantor Weisser persisted. Finally they agreed, with one condition: If I had to travel away from home because of a performance, then I would have to be housed at the home of a local rabbi, so that they could be sure I was in good hands.

Cantor Weisser was chazan at the Avenue O Jewish Center in Bensonhurst where Rabbi Shlomo Aharon Kazarnovsky, a Chabad-Lubavitch chasid, was the rabbi. It is at Rabbi Kazarnovsky’s Shabbos table that I first heard Chabad teachings, and I learned to sing Chabadniggunim which I found very stimulating.

In 1946, when I was 21 years old, I accompanied my father on a trip to Eretz Yisrael and there I met a man by the name of Moshe Shimon Geshuri, who was very involved in chasidic music. Mr. Geshuri requested that I take some material back to New York to be delivered to a certain Rabbi Schneerson, who was the son-in-law of the Lubavitcher Rebbe.

When I returned home, I went in search of this Rabbi Schneerson and found his office at 770 Eastern Parkway in Crown Heights. Although I appeared there without any appointment, he welcomed me in. I had no way of knowing that, in a few years, he would become the Rebbe. I do recall, however, that he made quite an impression on me. He had a lot of charisma, that’s for sure, and he took an interest in me. I thought that I would just hand him the material from Mr. Geshuri and go, but he started asking me questions. He wanted to know who I was, where I was learning, and why I had gone to the Holy Land. So I explained that my father went to visit his brother and had taken me along. While in Eretz Yisrael I composed a niggun to Psalm 23, “The Lord is my shepherd,” which they immediately started singing in a shul in Haifa. Eventually, this became my most famous composition.

Not long after that meeting with the Rebbe, I started attending addresses that he was giving on special occasions. These classes were not specifically geared to Lubavitcher Chassidim, and they had become popular with other yeshiva students in the area – students from my school, Torah Vodaas, from Chaim Berlin, and from other yeshivas.

The Rebbe would talk for something like an hour-and-a-half, expounding on many topics completely from memory, without any notes, which was astounding. He clearly had an encyclopedic knowledge of Jewish texts, which he would analyze in depth. I, for one, thought that he was a genius, and I always left very inspired by the beauty of his teachings.

After he became the Rebbe, I had the opportunity to meet with him privately on a number of occasions, two of which I’d like to relate here.

The first happened in 1965, when my father was in a terrible accident. It was the morning of the first day of Sukkos. He was going down the stairs carrying his lulav, when he missed a step and fell. He hit his head against the wall and suffered a concussion. By the time he was found and rushed to the hospital, he was in a coma.

The situation was dire, and the family dispatched me to request the Rebbe’s blessing. When I got to 770, the Rebbe was in middle of a farbrengen. Many hundreds of chasidim were packed into the sukkah, and there was no way I was going to get through to the Rebbe. But Rabbi J.J. Hecht, one of the Rebbe’s right-hand men, noticed my distress, and after I explained the situation, he had two guys pick me up by the arms and plunk me down right in front of the Rebbe.

The Rebbe was startled at first, but when he saw how very distraught I was, he asked me to tell him what happened, which I did as briefly as I could.

The Rebbe asked for my father’s name and his mother’s name. When I told him, the Rebbe suddenly said, “Sing a niggun.” I was taken aback, because I didn’t feel much like singing, but I obeyed. I sang a niggun of the Modzitzer chasidim, a popular one, and before long, all thechasidim gathered there were singing with me. It actually brought me a great deal of comfort.

Then the Rebbe asked Rabbi Hecht to give me his private number, which I memorized because I couldn’t write on Yom Tov. He instructed me to call him if there was anything I needed to tell him, and I did call the Rebbe’s home at two in the morning when my father’s situation turned for the worse. He answered the phone himself.

Although my father passed away the next day, on the first day of chol hamoed, he was able to come out of the coma long enough to say Vidui, the confession prayer, for which I was grateful. Remember, we were not Chabad chassidim, but that was the level of personal interest the Rebbe took in us.

Nearly ten years later, in 1974, I got another opportunity to sing before the Rebbe.

At the time, I lived in Crown Heights near Rabbi Yosef Weinberg, who used to deliver radio lectures on the Tanya. One day, he came to me and said, “You know, every year on the Rebbe’s birthday – which is the eleventh of Nissan – we present a niggun to the Rebbe. But this year, theniggun didn’t seem to catch on. Would it be possible that you compose a niggun for the Rebbe?”

I didn’t know what to say, because I wasn’t even sure how to go about it. So I asked him if it had to be in the style of Chabad, but he said it didn’t have to be. He gave me a free hand to compose anything I wanted.

So I started thinking about it, and I came up with a melody to a verse in Psalm 73, which is the psalm one says at age 72. When I had the niggun ready, I called him and asked, “What do you want me to do with it now?”

He said, “Come to the next farbrengen and sit in the back of the Rebbe. And when I give you the signal, start to sing.”

So that’s what happened. At the signal, I started to sing: “VaAni kirvas Elokim li tov – As for me, the nearness of God is my good.”

At first, everybody was stunned. But then the Rebbe turned around and smiled, so I continued to sing, making the beat a little faster. All of the sudden, the Rebbe became very animated, and he started waving his hands. Everybody picked up the melody, and we sang it over and over.

My wife was sitting in the women’s section, and a lady who didn’t know that she was my wife, said to her, “S’iz ungenumen! Der Rebbe hut dos ungenumen! – It’s been accepted! The Rebbe has accepted it!”