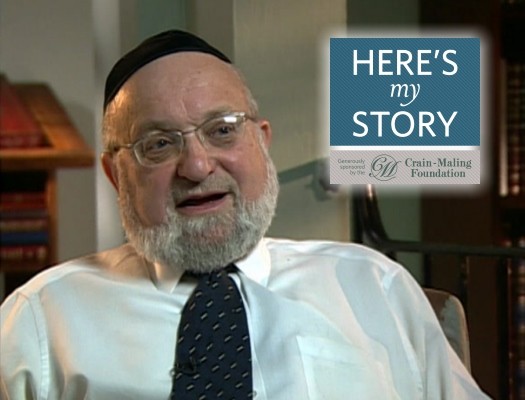 Rabbi Avraham Pinter has served as the principal of various yeshivas in the New York metropolitan area, including Mirrer Yeshiva, Yeshiva Chaim Berlin, Shaarei Torah, and Yeshiva Chofetz Chaim. He has also served as superintendent of the Midtown Manhattan school district. He was interviewed by the My Encounter with the Rebbe project in his home in May of 2008.

My name is Avraham Pinter. I was born in 1940 in Tarbes, France, to a family of Holocaust survivors. They were originally from Galicia, Poland, which they fled to escape the pogroms. And then they lived for a time in Berlin, Germany, until they ran to escape the Nazis. Eventually, after I was born, we all made our way to America and settled in Williamsburg, Brooklyn.

While my father was a youngster living in Berlin in the early 1930s, he had the great fortune to find himself in the company of some of the most esteemed leaders of his generation, notably Rabbi Chaim Heller, who wrote the famous Sefer HaMitzvos based on the order first proposed by Maimonides.

Rabbi Heller was known as a world-class genius, and many people – some of whom were great scholars in their own right – gravitated to him, treated him with utmost reverence and sought admittance into his study hall, though only a select few made it inside.

At the time my father was a young chasidic student gifted with a phenomenal memory and a very, very good head; one day he came into Rabbi Heller’s study hall and tried to catch the great teacher’s eye. When he finally succeeded, Rabbi Heller called him over and asked, “Young man, what are you looking for here?”

My father answered, “My teacher sent me here to glean bits and pieces of knowledge.”

“Who is your teacher?”, Rabbi Heller asked.

When he heard the name, Rabbi Heller stood straight up to show reverence to my father’s teacher, and then he proposed to quiz my father on his Torah knowledge. He began with, “What can I ask you?”

My father, being young, answered (speaking in the third person as was customary when addressing a sage), “The Rabbi can ask me whatever he wants.”

“Is that so?” Rabbi Heller was surprised, but taking him at his word selected a very difficult Talmudic passage and asked him the meaning.

Without batting an eyelash, my father began an impressive recitation of the various commentaries on this particular passage.

When he was through, Rabbi Heller said, “You can remain here. You passed the test. You can be part of this group. And, if you have any difficulties, you can ask these two lions.” With that he pointed to Rabbi Schneerson, the future Rebbe, and to Rabbi Soloveitchik.

In later years, when my father became famous in his own right, he rarely lavished praise on anyone, but he did tell me that, from his encounters with the Rebbe in those years in Berlin, he got a glimpse of his greatness. He said to me, “I can testify that the Rebbe knows everything there is to know in Torah. There is nothing that he doesn’t know.”

Keeping that in mind makes the story which I will relate next all the more astonishing.

In 1955, my family moved to Crown Heights and my mother invited her parents, my grandparents, to come and visit our new home. They were elderly people, European, “greenhorns,” not that long off the boat, so to speak. They got onto the New York subway and got off at Kingston Avenue right by Chabad Headquarters at 770 Eastern Parkway.

They were looking at house numbers, unsure where to go. They saw someone walking by who looked Jewish – he had a beard and he was carrying a Torah book – so my grandfather spoke to him in Yiddish: “My daughter and my son-in-law, Rabbi Pinchas Pinter, just moved here, but I don’t know where their house is.”

The man asked, “Do you have the house number?”

He took them across the entire parkway, and walked with them until they came to the right house.

When they arrived, my younger brother was waiting by the window, and he was shocked by what he saw. When they came into the apartment, he asked them, “Do you know the man who brought you here?”

My grandfather said, “No. He was some nice Jew I met. I told him that I was looking for this address, and he walked us here. It was very kind of him.”

“He is the Lubavitcher Rebbe!”

My grandfather refused to believe it. He said, “A Rebbe who goes without an entourage? Who acts like a simple person? Who helps people to cross the street? What kind of Rebbe is this?”

My grandfather didn’t realize that this was usual behavior for this Rebbe. I personally saw him many a time going into the corner store to buy milk and a newspaper for his mother, who was then living on the corner of Kingston Avenue and President Street. Many times I saw him do this and then walk by himself to bring the groceries to her.

I’ve heard others speak of similar recollections. Rebbetzin Shur, the wife of Rabbi Avraham Shur, told me that when the Rebbe lived in the building on New York Avenue, she saw him helping a pregnant woman, Mrs. Pletchenik, get into the elevator with her parcels. She went up in the elevator, but he walked up the steps.

That’s just the kind of Rebbe he was.