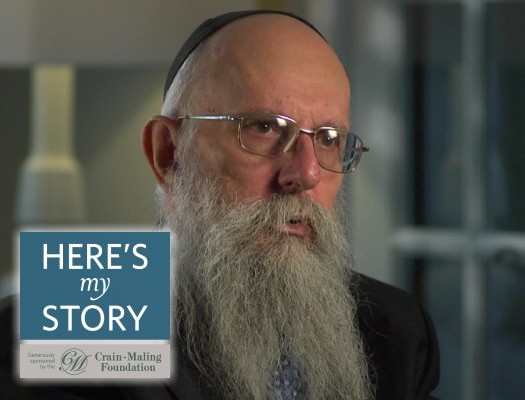 Rabbi Chaim Jacobs and his wife Sora have been the co-directors of Lubavitch of Scotland for the past 45 years. Rabbi Jacobs was interviewed for JEM’s My Encounter with the Rebbe project in May of 2014.

My name is Chaim Jacobs. I was born in England and brought up in a traditional family in the Stamford Hill neighborhood of London. We lived on Cranwich Road, which just happened to be the Lubavitch Street in London. The Rebbe’s emissary, Rabbi Bentzion Shemtov, lived on that street, and at 89 Cranwich Road, there was a Lubavitch Hebrew school. From the age of 5, I attended evening and Sunday classes there. This is how I and my whole family became involved with Chabad Lubavitch.

Later, I learned in the yeshiva at the Chabad Headquarters in New York, where I had the privilege of watching the Rebbe in action up close.

While I was in yeshiva, on the Shabbos before the start of the month of Sivan – which fell on June 3, 1967 – the Rebbe spoke about the situation in Israel. At this time, there was a tremendous crisis in the Middle East, because a few weeks earlier, President Nasser of Egypt had evicted the United Nations’ peacekeeping force and blockaded the Gulf of Aqaba. Israeli ships could not come in and out of Eilat, and the crisis was becoming more and more serious every day. Quoting the Talmud, the Rebbe said that the verse, “The nations of the world see that the name of G-d is upon you, and they will fear you” refers to tefillin, and that this must be publicized to the Israel soldiers.

The next day, on Sunday, the Rebbe fasted, and on Monday – June 5th – the Six Day War began. I remember how excited everyone was to hear that, on the first day of the war, Israel had destroyed the entire Arab Air Force – military planes of Egypt, Syria and Jordan were out of commission; they never even got a chance to take off.

On the second day of the war, following the Rebbe’s directive, I and several other yeshivastudents went out to ask non-religious Jewish businessmen to put on tefillin. We visited shops in the area of Kingston Avenue, Empire Boulevard and Utica Avenue, saying to every person we met, “Let’s help Israel to victory.” There wasn’t one man that morning who refused to put on tefillin. Everyone was so inspired by the victory that Israel was achieving.The Rebbe really wanted this great inspiration to move forward. If you asked any Jew at the time to support Israel financially, there was no question that every man would empty out his wallet. The Rebbe was of the opinion that if, instead of asking for money, rabbis stood up and said, “Gentlemen, let’s roll up our sleeves and start putting on tefillin for Israel,” every Jew would have done it. The euphoria of that time was absolutely tremendous. And the Rebbe was upset that this chance was missed.

I continued going out every day and sending the Rebbe daily reports about my tefillinactivities. When I gave the Rebbe my first report, he responded, “I am happy about the good news … because for every person who puts on tefillin, other people who see him will do that same.”

One day, as I was walking on Bedford Avenue, I noticed an armory, which seemed to be a hive of activity. The people who were not drafted for the Vietnam War were coming there for training. So I asked them, “Do you have any kind of prayer services here for Jewish soldiers?” They didn’t, but they said they’d be more than happy to welcome me in.

So I arranged services for the Jewish soldiers on Shabbos morning. I would come back on Sundays with a dozen other yeshiva students, and we’d very quickly put tefillin on as many soldiers as was humanly possible.

When I reported this to the Rebbe, I got an answer back that I should increase what I was doing. And the Rebbe essentially said, “The checkbook is open.” In other words, funds were available to expand this project, and – as it turned out – even for a small office. This kind of thing was unheard of at Chabad!

With the money, we printed various religious materials to hand out to the soldiers – and later transliterated blessing cards for them to use – and we rented cars to drive out to all the nearby armories. For the next couple of years, we had a tremendous program going. This is how thetefillin campaign, which is still alive and well today, got started. And it was all inspired by the Rebbe’s directive.

After two years, I got married and, in 1969, my wife and I were dispatched as the Rebbe’s emissaries to Glasgow. This proved a challenging assignment because we had a great deal of trouble raising funds. It’s really tough when you are a one-man band and you have to do the work and the fundraising as well. I was totally green; everything I know, I learned on the job.

We tried and tried, but by the summer of 1982, we felt the financial situation was unbearable. So I wrote to the Rebbe that we wanted to resign because we couldn’t make ends meet in Glasgow. Our debts were over 12,000 pounds, and we wanted to be transferred someplace else.

In response, we got an unbelievable letter which was later published in Likkutei Sichos. The Rebbe reminded me that I had written to him several weeks earlier that despite our travails, we were seeing great success, and “G-d’s miracles at every moment.”

This was always his way – to minimize the problem, to point out the positive and to offer encouragement.

Then he went on to remind us that when we came to Glasgow we started at the bottom in every way. But by now, with G-d’s blessings, we had sons and daughters who followed the way of Torah and mitzvos. We had a house of our own. We had established institutions and activities in the city that were being emulated by others. We were famous and respected by the local government, and even the non-Jewish leaders. How could we complain that our situation was not good?

“Numerous times in the past, your financial situation was similar to the present and each time things sorted themselves out. This time will be no different…You must take the logical steps to reverse the situation, and most importantly, to have complete trust in G-d…

“The idea to abandon all that you’ve accomplished and start anew in some other place is strange. Is this suggestion even worthy of consideration?

“…Obviously you must pray that G-d fulfill all your needs from His full hand…but it must be preceded by thankfulness for his abundant kindness to you. True and practical joy.”

With the letter came an offer of a three-year loan of 1,000 pounds. And that proved to be the amount we needed to bridge the gap at that particular time.

Everything else is history. We stayed in Glasgow and all worked out as it should, and as the Rebbe knew it would.