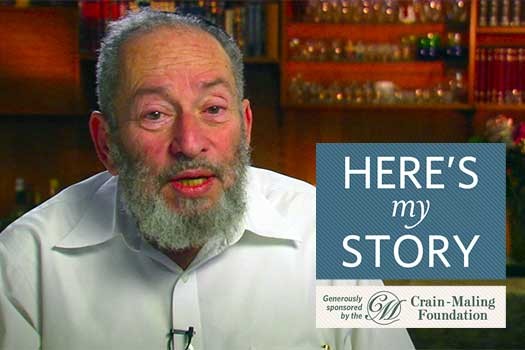 Rabbi Chaim Brovender is the founder of Yeshivat Hamivtar, Midreshet Lindenbaum and WebYeshiva. He was interviewed in his home in Jerusalem in March of 2010.

My name is Chaim Brovender. I was born in Brooklyn in 1941, when Brooklyn was a great center of Jewish activity. I attended Modern Orthodox schools, namely the Yeshiva of Flatbush – both elementary school and high school – and after that I went to Yeshiva University, where I received my rabbinic ordination. In 1965, after I got married, I made Aliyah to Israel. There I also learned at Hebrew University and received a doctorate in Semitic languages.

While in Israel, I felt myself drawn to learning Torah and, after that, to teaching Torah, and that’s basically what I’ve done my whole life.

The story I’m about to share happened in 1967. My wife Miriam and I were living in Israel by then, but we were on a visit to New York and, although we were not chasidim, we decided to request an audience with the Rebbe of Chabad-Lubavitch. At that time, everybody understood that a blessing from the Rebbe was something worth grabbing onto, and my wife especially wanted a blessing to get pregnant – because we were having a problem conceiving – so we got an appointment to see him.

The appointment was for 3 a.m. because, in those days, the Rebbe learned and worked all day and would only see people at night.

We came into his office and were astonished to find it in perfect order. His desk – a very big desk – was absolutely clean. There was not one piece of paper on it. I believe there was a Book of Psalms on the desk, and that’s all.It seemed to us that there was no unfinished business in his office. Other people have a desk which is cluttered with open books, letters and other documents – all kinds of things that indicate they’re in the middle of this or that. But with the Rebbe, there was nothing. Everything was in order. There was no indication that he was there every single day, for hours upon hours, producing a tremendous amount of Torah material – which is, in fact, what he did. There was nothing there to hint at that.

It was almost as if the Rebbe wanted to convey a message: “Right now, I have nothing else on my mind except for the two of you who are sitting in front of me.”

And that was quite startling to me.

The Rebbe starting speaking to us in Yiddish, and since both Miriam and I know Yiddish, this was the language in which we conducted the conversation. The interesting thing was the Rebbe didn’t say at the outset, “What do you want?” or “What’s the purpose of this meeting?” Instead, he asked us our names, where we were from, what we were doing … that sort of thing.

When we mentioned that we were from Israel, he wanted to know the particulars. So I told him that we made Aliyah two years prior, and that I learned in a kollel in Jerusalem.

“Where do you live?” he asked.

“Kiryat Moshe,” I replied, referring to the neighborhood of Jerusalem.

“What street do you live on?”

Now, everybody knows that the Rebbe never set foot in Israel, so this was a peculiar question to me. Like somebody asking, “Oh, you come from Mongolia! What street do you live on?” Like it would make any difference.

But, being polite, I answered the Rebbe, “I live on Rechov Reines, number 13.”

And then he asked me, “Is the vegetable store still there?”

At first, I didn’t know what he was talking about, but Miriam understood what he meant. “Yes,” she said, “there is a vegetable store downstairs, in the basement.”

I couldn’t believe it!

Later in the conversation, the Rebbe asked me what I was going to do with my life.

I didn’t have a clue about what I was going to do, because I was pretty

happy not doing anything other than learning Torah. That was fine with me. So this is what I told the Rebbe.

So I said to him, “You know, the rabbis in my yeshiva, they all think I should stay where I am and keep on learning.”

When he heard that, the Rebbe smiled, and then he said, “The rabbis in yeshivas aren’t always right. So think about what I said.”

And I promised to do that.

In fact, when I returned to Israel, I opened up a yeshiva in Jerusalem for Americans who were newly returning to Judaism. It was called Yeshivat Hamivtar. But, while I was able to start the yeshiva with no problem, I hadn’t realized what it would take to raise the money to sustain it. I was a little naive about that.

Because of money issues, I ended up moving the yeshiva to Efrat – which is some distance from Jerusalem – and I was able to keep it going there for 25 years until I retired.

So it turned out that I did what the Rebbe asked of me. He had wanted me to leave Jerusalem and open a school of Torah learning in a place where there were no yeshivas.

And thinking back on it, what he said turned out to be more of a prediction than advice. It is not just that he said to me, “It would be good if you did this…” He implied, “This is what you are going to do.”

I have no way of knowing for sure what was the exact intention of the Rebbe. But I do know that this is a possibility, because the Rebbe didn’t waste words.

And as for the blessing to have children, my wife became pregnant shortly after, and we eventually became the parents of six children. So there too the Rebbe didn’t waste words.