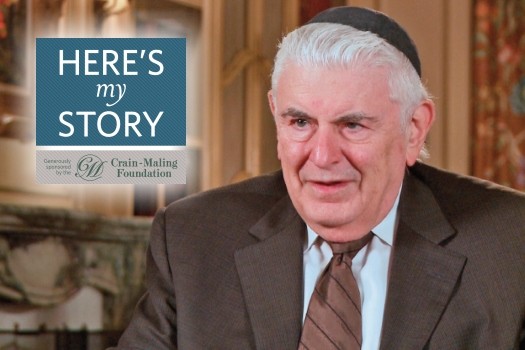 Here’s My Story: All for the Cause

Mr. Moshe Salzberg lives with his family in Montreal, Canada. He was interviewed for JEM’s My Encounter with the Rebbe project in his home in January of 2011.

My name is Moshe Salzberg. I was raised in Lisbon, Portugal, where my parents spent the wartime years. After high school, I came to New York to study at Yeshiva University and the Brooklyn Polytechnic Institute, but after I got married, I immigrated to Montreal, Quebec, in order to find work. I have lived in Montreal for close to fifty years now, and I’ve been involved with the Jewish community here. My involvement came about mostly because of my three children and my concern for their religious education.

In 1968, when my son Meyer was ready to start school, there was a Lithuanian-style yeshiva in Montreal, called Yeshiva Merkaz HaTorah, and there was also a Lubavitch yeshiva. As a matter of fact, the founders of Merkaz HaTorah came to town at the same time as the Lubavitchers. At one time they worked together, but eventually they split.

So we didn’t see a future for Meyer at that school. A few of the other parents felt the same, and so we decided that maybe we should start another school, because it seemed to us that Merkaz HaTorah would eventually disappear.

That’s when I started talking with the Lubavitchers, who did not want another yeshiva in Montreal. Instead, they invited me and the other parents to bring our children to their yeshiva. At that time, they had just put up a new building on Westbury Avenue in Montreal, so they were conveniently located in the area.

We met with Rabbi Sputz, Rabbi Greenglass and Rabbi Gerlitzky, and we discussed the idea of making a yeshiva together. The meeting was going well until I asked: “Who decides on the teachers for these kids?”

I said, “Yes, but maybe we want to have some other teachers, not all Lubavitch.”

They did not want to agree to that. So that put an end to this attempt for us to become part of the Lubavitch yeshiva. But then I got the idea of going to see the Rebbe to ask him what he thought about all of this.

I had met the Rebbe once before in connection with the founding of Camp Gan Yisrael in Montreal. At that time, the Rebbe gave me a five dollar bill – not a one dollar bill as was his custom, but a five dollar bill, which I still have. So that first meeting was a special memory, and I felt that he would find a way out of this dilemma.

I came to Chabad Headquarters in New York and, after a long wait, I was invited to go into the Rebbe’s office at around 1:00 a.m.

He inquired what I wanted to talk to him about. I told him I had come to discuss building another yeshiva in Montreal – a Yeshiva Gedolah.

He asked, “Do you have enough students for the yeshiva?”

I said, “We don’t have very many at this time – only about five or six boys. But once we start one grade, we hope it will grow from grade to grade.”

I also explained to the Rebbe that the kids want to be religious, but they don’t necessarily want to be Lubavitch.

The Rebbe was quite understanding. As a matter of fact, he told me: “Listen, I want you to build a yeshiva. And it should be the nicest yeshiva that you can build. It should have air conditioning for the study hall, and it should be attractive, because the mothers of these children want them to go to a very nice, very comfortable place.”

He was in favor of another Jewish school going up in Montreal. He understood that not everyone wants to be Lubavitch, nor has to be Lubavitch. There are other ways of serving Hashem. And that is good.

At the end of the meeting he gave me a blessing, and he wished me that I should succeed.

When I returned from New York, any opposition to another yeshiva from the Lubavitchers melted away, and I succeeded in founding a Yeshiva Gedolah.

And it all worked out. Five years after we founded it, Yeshiva Gedolah and Merkaz HaTorah merged, and today 450 students attend this institution from pre-school to post-high school Talmudic studies. All thanks to the Rebbe’s blessing.