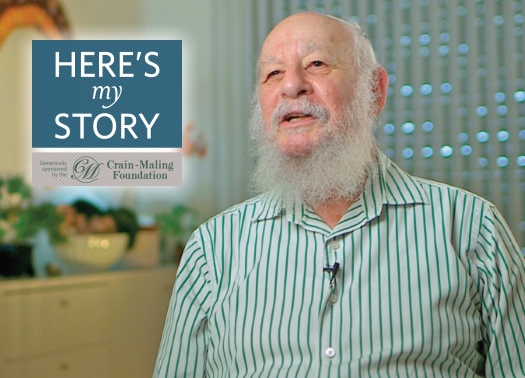 Here’s My Story: Out of the Box

Mel (Menachem) Alexenberg is an artist, writer, and art educator best known for his explorations of the intersections between art, science, technology and culture. He is the author of seven books, and his artworks are housed in the collections of more than forty museums worldwide. He was interviewed by JEM’s My Encounter with the Rebbe project in his home in Ra’anana, Israel, in July of 2014.

My name is Menachem Alexenberg, but I am also known as Mel Alexenberg. I was born in New York in Brooklyn Jewish Hospital, which is now Interfaith Hospital. My bar mitzvah was in Flatbush in my uncle Morris’s synagogue, which is now a mosque, and I married my wife Miriam at the Park Manor Wedding Hall, which is now a Baptist church. So I like to say that I was born in Interfaith Hospital, had my bar mitzvah in a mosque and my wedding in a Baptist church. But however that makes me sound, the truth is that I grew up in an Orthodox Zionist family, went to yeshiva, then to Queens College where I studied biology, then to Yeshiva University where I earned a degree in education, and finally to New York University where I received an interdisciplinary doctorate in art, science and psychology.

I first met the Rebbe in 1962. Although I had no chasidic background, my sister-in-law – whose husband was studying at that time in the Chabad yeshiva in Brooklyn – convinced me to request an audience with him. I had a fascinating discussion with him on the relationship between art, science, technology and Judaism, which has been my life’s work. He was very interested in these kinds of things, as a scientist and an engineer himself.

That first meeting led to many others, and to a voluminous correspondence between us. I cannot remember exactly at which meeting it came up, but the Rebbe told me one thing that became a central part of my thinking. He pointed out that, in Hebrew, the words for “matter” and “spirit” are interchangeable; that is the letters that spell chomer, meaning “matter,” also spell ruach, meaning “spirit” – all you have to do is drop one letter.

Because of this insight, a lot of my artwork – as a matter of fact almost all of my artwork – begins with Hebrew words and Torah concepts. It might become high-tech stuff, but it starts there.

Then there was the time when the Rebbe’s advice literally changed my life.

I had been teaching at Columbia University, and I decided it was time to return to Israel. But I didn’t want to accept a position at an Israeli university and live in Tel Aviv. If I was going to return to Israel, I didn’t want it to be a step down from New York; I wanted it to be a brand new experience. So I inquired what place would be the complete opposite of New York, and the answer I got was Yerucham.

Yerucham is an isolated town in the middle of the Negev Desert into which immigrants from North Africa – chiefly Morocco – got dumped. At that time, it was the place in Israel with the greatest economic problems, the biggest educational problems, the worst social problems. If there was any place in Israel that was the opposite of New York, this was it!

Before I embarked on this crazy idea of moving to Yerucham, I decided to ask the Rebbe what he thought about it. He said, “It’s a nice idea to be a pioneer. With your background, you could contribute to the development of Yerucham. I you establish an institution of higher learning there and help it become a ‘college town.’ If you do this, people will stop trying desperately to run away from it; they’ll actually come there from elsewhere to study. The influx of students will change everyone’s whole attitude towards the town.” He explained to me the American concept of the small “college town.” I remembered that he specifically mentioned Gainesville, Florida, as an example of this phenomenon.

So I did it. I arrived with my wife in Yerucham on a Thursday, settling into an apartment that didn’t even have electricity. On Shabbat I took a walk to explore the town, and what do I see but a large new building, apparently a school, unoccupied, at the southern end of the town. The next day when I met with the mayor and asked him about it. He told me that the building was the folly of Israeli bureaucracy. It was built by the Department of Education for special needs children, but there were only five special needs children in all of Yerucham, and those five were bussed to a special needs school in Dimona. So the building was useless.

I said, “Give me the building. The Lubavitcher Rebbe told me to start a college here, and this is a perfect building for a college.” His response was: “Take it. Please take it!”

Two days later a group of Jews from Montreal arrived in town, and the mayor asked me to translate for him. I happily agreed and, of course, I told this group what the Rebbe had instructed me to do. They thought this was a tremendous idea – what better way to develop this town? – and they pledged to get me the funds to get going.

Now all I needed was accreditation and teachers. For that I called my friend Tuvia Bar Ilan of Bar Ilan University, who was more than happy to open a branch of his school in the Negev, thus providing the full university accreditation.

Normally it takes years to establish a college – build the building, get the funding, get the accreditation – but it all happened in six days. A couple of months later the college opened with four hundred students!

What a miracle story – all thanks to the Rebbe’s creative mind. He was a man with a tremendously creative imagination. He could make giant leaps from one place to another and make connections between seemingly disconnected things. Here he connected education with social issues, economic issues and Israel’s development.

His thinking was always out-of-the box. He had this out-of-the-box idea to make a university in the worst town in Israel – a place no one else would have thought to put an institution of higher learning. But he considered all the angles, the psychology of it, and how it would transform the place.

Today Yerucham is a wonderful, beautiful place. My son and his family live there. And they love living there because it is a very beautiful, very wonderful place right now. All thanks to the Rebbe’s foresight.