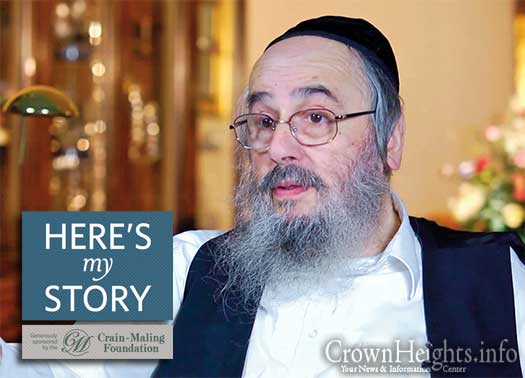 Here’s My Story: We Just Called Him “Monsieur”

For its 99th edition of Here’s My Story the My Encouter team at JEM share a particularly moving and emotional story told by Rabbi Aron Dovid Neuman, of a man he only knew as “monsieur” who he met in France as a child during the Holocaust, and to whom is sure he owes his life.

It took the My Encounter teak over ten years to get this interview done. From when they first got the lead, they kept in touch with R’ Neuman, calling and visiting, even taking him and his wife to the Ohel – all in an effort to get him to tell his amazing story.

It was then, on the way back from the Ohel, that he revealed that that his whole family – children, grandchildren and great-grandchildren – are only alive because of the Rebbe.

To download this in PDF format for print; color or monochrome

I was born in 1934 in the village of Vizhnitz, Ukraine. When I was a small boy, my parents immigrated to Antwerp, Belgium. Belgium had a large Jewish community — some 50,000 Jews lived in Antwerp at that time — and they hoped to have a better life there.

Unfortunately, our stay did not last long. In 1940, the Germans invaded Belgium and immediately began deporting and killing Jews. So everybody started running. We ran across the border to France.

I was only six years old at the time, but I was old enough to realize that we were fleeing for our lives.

We made our way to Marseilles where my grandmother — that is, my mother’s mother — and also my mother’s sister lived. A group of Lubavitcher chasidim lived there, and we were welcomed warmly. But the problem was there was nothing for us there. By nothing, I mean that with the war going on there was not enough food, and also not enough adequate shelter to handle the influx of all the refugees. We moved from house to house, from place to place. A few months later the Nazis invaded Paris, and the situation got even worse.

In the midst of all this chaos and upheaval, my family was forced to split up. Only after the war did I get to see them again. Meanwhile, I was sent to an orphanage in Marseilles.

The orphanage housed some forty or maybe fifty children, many of them as young as three and four years old. Some of them knew that their parents had been killed; others didn’t know what became of their mother or father. Often, you would hear children crying, calling out for their parents who were not there to answer.

As the days wore on, the situation grew more and more desperate, and food became more and more scarce. Many a day we went hungry.

And then, in the beginning of the summer of 1941, a man came to the rescue. We did not know his name; we just called him “Monsieur,” which is French for “Mister.” Everyday, Monsieur would arrive with bags of bread — the long French baguettes — and tuna or sardines, sometimes potatoes too. He would stay until every child had eaten.

Some of the kids were so despondent, they didn’t want to eat. Those children, he used to take on his lap, tell them a story, sing to them, and feed them by hand. He made sure everybody was fed. With some of the kids, he’d sit next to them on the floor and cajole them to eat, even feeding them with a spoon, if need be. He was like a father to these sad little children.
He knew every child by name, even though we didn’t know his. We loved him and looked forward to his coming. I remember there was a kid who was jealous.  He also wanted to sit on Monsieur’s lap and hear songs and stories. So he pretended not to eat, in order to get his attention.

Monsieur came back day after day for several weeks.  And I would say that many of the children who lived in the orphanage at that time owe their lives to him. If not for him, I, for one, wouldn’t be here.

Eventually the war ended, and I was reunited with my family. We left Europe and began our lives anew. In 1957, I came to live in New York, and that’s when my uncle suggested that I meet the Lubavitcher Rebbe. Of course I agreed and scheduled a time for an audience with the Rebbe’s secretary.

At the appointed date, I came to the Chabad Headquarters at 770 Eastern Parkway and sat down to wait. I read some Psalms and watched the parade of men and women from all walks of life who had come to see the Rebbe.  Finally, I was told it was my turn, and I walked into the Rebbe’s office.

He was smiling, and immediately greeted me: “Dos iz Dovidele! — It’s Dovidele!”

I thought, “How does he know my name?” And then I nearly fainted. I was looking at Monsieur. The Rebbe was Monsieur! And he had recognized me before I had recognized him. It was unbelievable.

Later on I learned how he came to be in Marseilles. He and the Rebbetzin Chaya Mushka were trying to escape Nazi Europe. In order to arrange the necessary documents, he was travelling back and forth between Nice and Marseilles. He must have found out about the orphanage and the plight of us poor children, andhe came to our rescue.

I heard that after the Rebbe’s passing, a notebook with his handwriting was discovered. These notes covered every aspect of Torah and delved into Jewish philosophy, Kabbalah and the Talmud. Incredibly, many of these notes were written at the very time when the Rebbe was in France, at the beginning of the war. It’d mind-boggling to me that even amid all that chaos, he remained devoted to Torah study.

But what is even more remarkable to me is that a scholar of such magnitude would — at the same time — busy himself with delivering bags of food and personally feeding small orphans. He never forgot that saving lives is of primary concern. And I shall forever be grateful that he saved mine and because of him, I, thank G-d, have many children, grandchildren and great-grandchildren.

Rabbi Dovid Aaron Neuman lives with his family in the Williamsburg section of Brooklyn. He was interviewed in his home in November of 2013.

My Encounter is an oral history project dedicated to documenting the life of the Rebbe, Rabbi Menachem M. Schneerson, of righteous memory. The story is one of thousands recorded in the over 1,000 videotaped interviews conducted to date.

To receive Here’s My Story by email every week, please email mystory@jemedia.org.