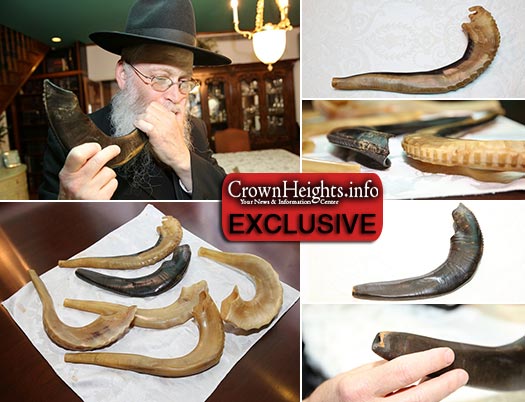 From The Archives: The Rebbe’s Unique Shofar Collection

This article was originally published on CrownHeights.info on September 24th, 2014.

It has been twenty three painful years since the Rebbe last blew Tekios on Rosh Hashanah, when the somber atmosphere and the sounds emanating from Rebbe’s Shofar would penetrate the soul of each of the thousands of man and woman packed into 770 for the occasion. CrownHeights.info is honored to publish an exclusive sneak peak at the Rebbe’s personal collection of Shofars – the first time they have ever been photo documented.

For the past eight years, since the passing of Reb Dovid Raskin, OBM, Rabbi Moshe Klein has had the unique privilege to blow Shofar in the Rebbe’s room on Rosh Hashanah.

Each year, two weeks prior to Rosh Hashanah, the Rebbe’s collection of six Shofars is handed over to Rabbi Klein so that he may practice the Tekios and inspect them to ensure that they remain fully kosher for use.

At the behest of CrownHeights.info, Rabbi Klein has agreed to reveal to the broader Chabad community these six unique shofars that belong to the Rebbe, and the fascinating histories that accompany them.

The six Shofars are numbered in accordance with their age. In the first photo in the gallery below, they are placed in numerical order from left to right.

1.   A black and white Shofar belonging to the Tzemach Tzedek. It is believed that this Shofar was passed down from the Tzemach Tzedek to his son Rabbi Baruch Shalom, and thus from father to son until it reached the Rebbe – though this has never been confirmed.

2. A black Shofar belonging to the Rebbe Maharash. This Shofar was the one the Rebbe used most often to blow Tekios on Rosh Hashanah.

3. A white, flat Shofar belonging to the Frierdiker Rebbe.

5. and 6. These two Shofars were made for the Rebbe in Israel at the behest of the Rebbetzin, who requested that ‘easier’ Shofars be obtained for the Rebbe after his heart attack on Simchas Torah, 5738 (1977). The Rebbe used these Shofars for three years, from 5739 to 5741 (1978-1980), after which he went back to using the black Shofar of the Rebbe Maharash.

Both the Tzemach Tzedek and the Rebbe Maharash’s Shofars became posul at one point, having developed cracks at their tops due to their advanced age. Both Shofars were then made kosher again by having their tops shaved down to remove the cracks. While the Rebbe Maharash’s Shofar remains kosher, the Tzemach Tzemek’s Shofar developed another crack that cannot be fixed, and is therefore no longer kosher for use.

On Rosh Hashanah, when the time came for the Shofar to be blown, the Rebbe – in a very somber aura – would place the six Shofars on the Bimah in front of him. For reasons that are unknown, the Rebbe would repeatedly rearrange the placement of the Shofars on the Bimah in front of him. When finally satisfied, the Rebbe would cover the entire Bimah – including the Shofars and bags of Panim submitted by Jews all over the world – with the head of his Talis, after which he would begin reciting ‘Lamnazeach Livnei Korach Mizmor.’

On the second day of Rosh Hashanah, the Rebbe would cover the six Shofars with two cloths, one white and one red. The purpose of the cloths was to have a ‘new garment’ upon which to say Shehechiyanu, as is customary.

The Rebbe would use the white cloth to wipe his lips while blowing the Shofar. In the photos below, the white cloth from the last year the Rebbe blew Tekios (5752-1991) can be seen along with the Shofars. The red stain on the cloth is a drop of blood from the Rebbe’s lips, a result of the immense strain the Rebbe bore to blow the Shofar.

After Tekios, the Rebbe would place the white cloth around his neck as a garment, and wear it until he left Shul. The red cloth would be sent home to the Rebbetzin.

May this glimpse at the glory of days gone by inspire us to pray this Rosh Hashanah for the ultimate redemption, when we will hear the sound of the great Shofar heralding the end of our exile.

This article was published with the approval of the Rabbi Yehuda Krinsky, chairman of Merkos L’inyonei Chinuch, and Rabbi Avrohom Shemtov, chairman of Agudas Chasidei Chabad.