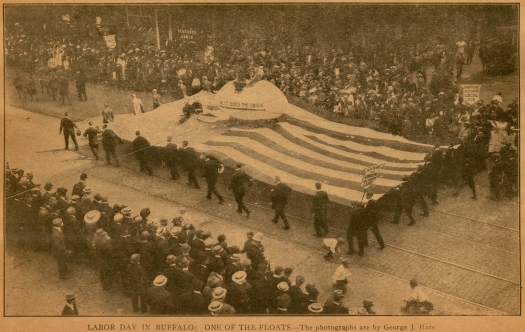 A Jewish Thought on Labor Day

It’s Labor Day once again, which brings up some very important questions: Where is the best Labor Day sale? Where did I put my dark hats?

Labor Day has been around since 1882; after 129 years, perhaps it’s time to dust off the holiday, shine some light on it and figure out what it’s all about. Or, more importantly, what it can mean to us.

Labor Day originated as a way to celebrate the hardworking folks of our nation, who toiled with muscle and sweat to build its infrastructure.

There were the people who thought up the ideas, created the companies and made the profits. But then there were the workers. They got up early in the morning and went to work carrying the burden of industry on their shoulders. Oftentimes the laborers are overlooked, and even taken advantage of. So the Central Labor Union came up with a day to remember the ones who do the work.

On the Jewish calendar, Labor Day always occurs in the month of Elul, the month of preparation for the High Holy Days. On Rosh Hashanah, we mark the anniversary of the creation of the human being, and rededicate ourselves to the purpose we fulfill in G‑d’s grand plan in creating the world. That purpose, theMidrash tells us, is that G‑d desired to have a dwelling place in the lowest realm.

Where is this lowest realm? you might ask. “Lowest realm,” the chassidic masters explain, does not refer to a geographic space but to a state of mind. A state of mind that does not readily perceive the divine, and could actually want to do something contrary to G‑d’s will. The lowest realm is me and you.

Is your state of mind a place where G‑d can call home? If it is, congratulations! You need not read the rest of this article. But for most of us, G‑d is still somewhat of a stranger (or, at best, a tolerated houseguest) in our lives, still waiting for us to build Him that home He desires.

What does it take to engender such a transformation? Some would say that what’s needed is enlightenment. If we could achieve enlightenment, we would have a loftier worldview, and we would become transformed. Indeed, there are many religions where this is the goal.

But Judaism has a different take on the matter. If our purpose in life is all about enlightenment, then once we achieve that enlightenment, we would no longer qualify as that “lowest realm” where G‑d wants to live. If we are truly to make G‑d a home in our “lowest realm,” then we need to invite Him into that state of mind where we are actually not in the mood to do the job. Where we’re doing something because it’s the right and needed thing to do—not because it’s our idea, or because we understand why it’s needed, or because we like the idea of doing it. Rather, we do it because it’s what’s required from us to be done. In English we call this “labor.” In Hebrew it’s called avodah.

The first man was placed in the Garden of Eden on the first Rosh Hashanah. For what purpose?

G‑d took the man and put him into the garden of Eden, to work it and to preserve it (Genesis 2:15).

If the purpose of creation were enlightenment, this world is quite a cosmic detour. The purpose, however, is to transform the world and ourselves into conductors of the divine. And the place to start is the lowest realm of our own consciousness. The place where we don’t feel the awesome flow of the divine light a mitzvah brings into the world, but we do it anyway as an obedient laborer: we know there is a job to do, and we do it. This is how to build the infrastructure of our spiritual selves.

When prayer doesn’t seem to “do it” for you, when learning Torah is the last thing on your mind—this is your opportunity. This is the moment that G‑d has been waiting for.

Performing when we are not in the mood is the true act of love. We are not doing it because we feel excited about it, but because this is who we are. This is the theme of the Jewish month of Elul. In Hebrew, the name Elul is an acronym for a verse from Song of Songs: Ani l’dodi v’dodi li—“I am to my Beloved, and my Beloved is to me.” I am to my beloved refers to the labor that we must put in before we receive inspiration. My Beloved is to me refers to the gift of divine inspiration, the reciprocation for our service.

Why do it without inspiration and feeling? Because this is the “lowest realm,” the space which G‑d desires to inhabit. And when we know that we are affecting divine joy through our service, it can be a labor of love.