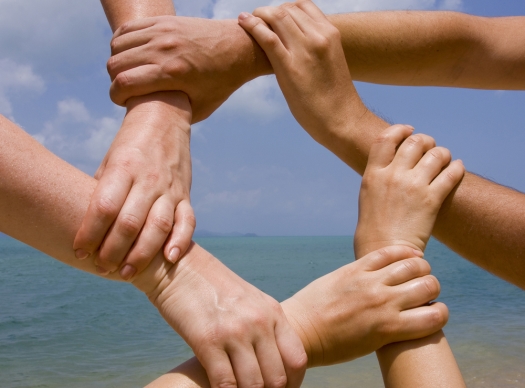 Singleness or Harmony? The Kabbala of Jewish Unity

One day when walking across a bridge, I encountered a man who was about to jump off. So I ran over and said “Stop! Don’t do it!”

“Are you Chassidish or Modern?” He said “Chassidish.” I said “Me too!”

“Apikores (heretic) that you are!” I shouted, “go ahead and make my day!!!” (This is only a joke, no politics intended. Please concentrate on the point and nothing else)

I respect and admire your efforts on behalf of Jewish continuity and I enjoy learning from you. I am however troubled by some of your and your movement’s exclusionary ideologies and practices.  Your non-acceptance of many of the other paths of Judaism seems as though you believe that you have the exclusive rights to Judaism, no disrespect intended.

Why, for example, are you all so close-minded about who and what you accept into the tent of Judaism? You seem to be more selective than G-d Himself.

Why, for example, don’t you just recognize the social and legal right of the Women of The Wall to wear prayer shawls, pray, and read from the Torah collectively and out loud at the Western Wall?

Does not the Torah assert in the beginning of Parshas – Nitzavim: ‘You are all standing this day before the Lord, your G-d, the leaders of your tribes, your elders and your officers, every man of Israel, your young children, your women, and your convert who is within your camp both your woodcutters and your water drawers, that you may enter the covenant of the Lord, your G-d, and His oath, which the Lord, your G-d, is making with you this day’ (Deuteronomy 29:9-11).

Does the above not imply the Lord’s acceptance of a broad range of Jewish ways and paths? Are you guys not acting like hypocrites when you label certain conversions as non Kosher? For the sake of Jewish unity couldn’t you be more inclusive? Is this not what the above verses are all about, what Judaism is all about?

I’m not trying to be a wise guy, Rabbi; it’s just that these issues bother me. Plus, when I tell my friends that I attend Chabad classes and functions they bombard me with these questions. I need to know how to answer them and myself.

I am glad that you made the effort to pose this question to me. It beats keeping it in your heart, or drawing your own conclusions as a result of a lack of courage (and decency) to ask. I appreciate being given the opportunity to explain. Perhaps you might encourage your friends to do the same.

With regards to the actual question, it appears to me that you have taken half the message of the verses you quote and neglected the other half. You have rightfully picked up on the verses’ illustrious emphasis on “Unity” – the inclusion of the masses and the various different classes.

What you have failed to observe is the “Nature” and “Context” of that unity, namely: “…So you may enter the covenant of the Lord, your G-d, and His oath, which the Lord your G-d, is making with you this day.” The context and substance of the unity is of critical importance. One cannot be separated from the other, it certainly cannot be ignored.

I think the following essay will shed some light on the issues you raise. Read it and we could talk about it at an upcoming opportunity.

Looking forward to seeing you soon.

“Unity, unity,” what a beautiful idea. Its virtues issue forth from the mouths of politicians and clergymen. Its praises roll from of lips of leaders, activists and ordinary folk of all ilk and class. The word conjures up images of an idyllic state of existence – a world in which there is no strife nor struggle – where humanity is bound by a single objective with a single mind and a single heart.

But is unity a real phenomenon, or is it a wishful fantasy? Can humanity actually come together, with a single heart and mind towards any single objective?

We humans are so different from one another. We possess extremely diverse interests, desires, inclinations and tastes. This is not only because of our selfish animal nature and agenda – which to, be sure, deserves due credit for its role in our inter-human discord and contention – but because our minds actually tend to operate on different frequencies by mere biological design.

No, we humans do not think alike, nor were we meant to. The Talmud states: “Just as no two people are identical in image, so are no two people identical in their way of thinking.” Each of our brains is wired somewhat differently and that’s how it was meant to be. Given the above can we even dream of unity and single mindedness?

The current political atmosphere is a perfect case in point: America’s increased pulverization due to the intense nature of the prevailing political landscape. Feelings run so deep; they tend to tear asunder families, friendships and citizenry.

Neither has the Jewish community been spared the enmity associated with the intense political divide. There is enormous contention and discord within all segments of the Jewish community over a plethora of national issues (not to mention Jewish issues). We cannot even agree on what is in the best interest of the Jewish people and the State of Israel. The prevailing political atmosphere is not a shining example of man’s capacity for unity and accord.

Yet, Judaism maintains that unity is not only a desirable and attainable trait but actually a necessity – a prerequisite for Divine revelation and blessing. How is this possible? If I’m for healthcare reform and you are vehemently opposed to it, how can we be united?

The answer is that unity does not dictate or require that everyone believe or act the same, or even agree with each other. Quite the contrary, unity by definition exists in light and in spite of our unique individuality and differences. Is there anything more opinion oriented than the Talmud?

This is to say that we need not deny the reality of our (or anyone else’s) individuality in order to be united. Not only do we all have the “Right” to be distinct in our thought and expression, it is in fact very much part and parcel of the Divine design of the human mission.” Is it not G-d, after all, who created us so different and distinct from each other? “If we would always think alike,” remarked one wife to her husband, “Then one of our minds would be superfluous!”

We must, accordingly, not try to silence those who disagree with us or badger them into accepting our viewpoint or will. Most importantly, our differences of opinion and views do not constitute just grounds for acrimony and ill will.

So you ask, where lies the unity in this philosophy? While the notion of “Agree to disagree” is very benevolent, it does not seem to symbolize unity. If anything, it is the antithesis thereof. Can unity and individuality coexist? The answer is yes of course.

Unity is the ability to master and harness our individuality and uniqueness towards a common and higher objective. Rather than to “Deny” them, it is to “Unite” them – to utilize them as a means towards a higher end, not as the end of a higher means.

In practical terms, this means that we allow ourselves to be bound together by that which is higher than ourselves – higher than our individuality and diversity. For true unity to exist there must be the recognition of higher (Divine) morals, principles and, yes, rules for which we are willing to yield our individual mind and heart.

Much as you don’t create light by beating-out the darkness with a stick, but rather by lighting a candle, you don’t create unity by beating-out your opponent’s individuality and point of view – a tactic that failed miserably throughout history – but rather by emphasizing and accentuating the higher morals and values which are greater than our individuality and separateness.

This is precisely what the Torah asserts in the beginning of Parshas – Nitzavim, the first of this week’s double portion: “You are all standing this day “Before the Lord,” your G-d, the leaders of your tribes… your women, and your convert who is within your camp both your woodcutters and your water drawers, ‘That you may enter the covenant of the Lord, your G-d, and His oath, which the Lord, your G-d, is making with you this day.’”

While the Torah emphasizes the awesome unity that prevailed among the people at that historic gathering – on the day of Moshe’s passing – it does not gloss-over the distinct different classes and categories that comprised the legendary assembly. Yes there was perfect unity and individuality at the same moment. Leaders, elders, officers, children, women, converts, woodcutters and water drawers – all with their own unique minds, personalities and talents – were all as one.

In face of higher reality and purpose, our individuality and diversity are fused together – they become complementary of each other like the sundry instruments in a symphony.

I recently came across this charming little adage: As we all know, there are minor variations in the text of our prayers. In the Shacharis (morning) service, there is for example, a difference in the order of the first prayer. Chassidim say Hodu before Baruch She-amar, while Misnagdim say it after. However, before the prayer of Yehie Ch’vod Hashem – which translates: “May the glory of G-d forever be” – both groups find themselves aligned.

The point here is that when it comes to the glory of G-d, both Chassidim and Misnagdim – different as their ideas may be – find themselves on the same page. This, as stated above, is precisely the message of our Parsha – unity is attained through higher awareness and submission.

Among the numerous factors taken into account by our Sages when they arranged the Jewish calendar, is when each Torah portion will be read. Not only was the goal to complete the cycle of reading the Torah by the last days of the holiday of Sukkos, but also to make sure certain portions of the Torah would be read at particular times of the year.

Nitzavim is always read on the Shabbos preceding Rosh Hashanah, the Day of Judgment of all mankind. This gives the abovementioned point even deeper relevance. The words in our Parsha: “You are all standing this day before the Lord ‘This day,’” according to Kabbala, refers to the day of Rosh Hashanah as well.

The message, accordingly, is that by standing together “This day” of Rosh Hashanah – through true Jewish unity, as described above – we all merit Divine revelation and blessing. We are certain to be inscribed and sealed for a happy, healthy and sweet New Year. May this be the case with each and every one of us, with the coming of the righteous Moshiach BBA!