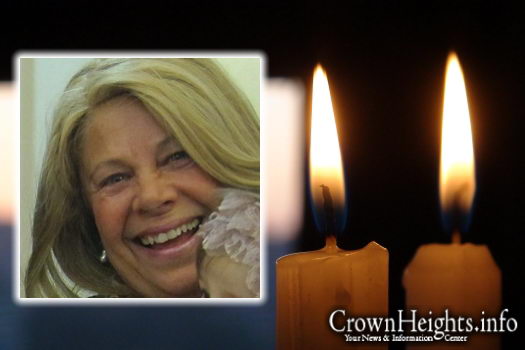 This coming Shabbos, Chof Menachem Av, marks the Shloshim of our mother, Bracha Finkelstein, OBM. In her honor we want to share with you that which she instilled within my sister and I, the power of Jewish women and their Shabbos candles. We ask you to join us in honoring her with the mitzvah uniquely given to the Jewish women.

Back in the late 70’s a brief and special moment took place in Kings Plaza, of all places, which created a great ripple effect. It was a fall day, right around Thanksgiving. My mother was there, a fresh new balas teshuva, and she spotted a young woman whom she quickly approached.

“Are you Jewish?” she asked.

To which my mother handed her a candle lighting packet.

“Oh, I’m not interested in this.” She responded abruptly and uninterested.

Not deterred, my mother pulled out a pamphlet about Bais Chana in Minnesota.

The young woman took the pamphlet and on it she found a list of questions she was having herself: what it means to be Jewish etc.

In the merit of this brief incident, this searching young woman became Lubavitch, married and today B”H has seven children and eighteen grandchildren, some of whom are shluchiim.

Our mother always made a special effort to light Shabbos candles on time. She felt strongly about doing the mitzvah that we women were uniquely given, the right way, by lighting on time.

In her merit we want to ask all Jewish women and girls to please take on lighting Shabbos candles five minutes early or before the 18 minutes this Shabbos Parshas Ekev.

In a sicha from Parshas Chayei Sarah (Likutei Sichos Vol. 15 pg 173), the Rebbe emphasizes the midrash in Yalkut Shimoni. There it says that through lighting Shabbos candles we will merit that Hashem will show us the lights of Tzion and usher in the geulah. May it be speedily now!