« Historic Meeting with NJ Shluchim and State Legislators
Shabbos at the Besht: The Rebbe and the 6 Day War » 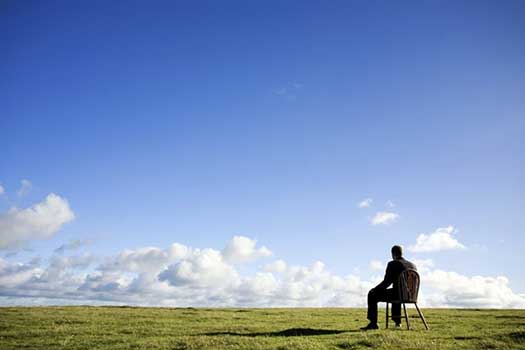 Two men in the same town came into sudden wealth. They both hit upon the idea of burying their treasures in the ground. Each picked a landmark on their respective properties, paced 50 steps and dug a hole.

Chaim, the more anxious of the two, kept looking over his shoulder to make sure he wasn’t being watched before placing the treasure into the ground. The more trusting Berel, on the other hand, took no such precautions. Alas, unbeknownst to him, he was noticed by a dishonest neighbor who eventually stole the treasure.

Still, it was Chaim the worrier who, after many sleepless nights, decided to check on his gold. To his bad luck, after locating the landmark, he counted the wrong amount of paces before digging into the ground.

Imagine his horror when he found that there was nothing there. Certain that someone stole his fortune, he could find no peace. Eventually the stress got the better of him and he died – his fortune safely intact.

Berel on the other hand, whose fortune was long gone, never even thought of checking on it. Poor as he was, he lived a long happy life believing that he was the wealthiest man in the world.

“It is the Lord who goes before you. He will be with you; He will not fail you or forsake you. Do not fear or be dismayed.” (Deuteronomy 31:8)

Worry, Fear, and Anxiety, are ailments we could all do without. Yet most of us wrestle with them daily on some level. One definition for worry is “to torment oneself with disturbing thoughts.”

“Anxiety disorders are more common than you think,” warns the National Institute for Anxiety and Stress. “Anxiety disorders affect about 40 million American adults age 18 years and older. That’s about 18% of the population in a given year.

Anxiety disorders are the number one mental health problem in America, surpassing even depression in numbers. Anxiety disorders cost the U.S. workplace $46.6 billion annually; 88% of this figure is from lost productivity” asserts the Institute. Anxiety and fear are interrelated. Fear causes anxiety, and anxiety can cause fear, say experts.

In the laws of Shmittah, presented in this week’s Parsha, the Torah instructs that every seventh year the land of Israel must lie fallow – no harvesting or planting is permitted. The Torah proceeds to reassure that if the residents of the land will keep the Divine directives of the Shmittah and the Jubilee years, “The land will yield its fruit and you will eat your fill and you will dwell securely upon it.”

In light of this resolute Divine pledge, the immediately following verse seems exceedingly curious: “If you will say, ‘What will I eat in the seventh year? Behold! We will not sow and not gather-in our crops!’”

Why would the Torah anticipate this type of question in face of the Almighty’s explicit guarantee, and obvious ability, to sustain and provide for the inhabitants, despite (and because of) their observance of the laws of Shmittah?

Even more perplexing is the fact that in presenting the question, the Torah makes reference to the seventh year. This is troublesome because normally the harvest of the previous year serves as provisions for the following year. Accordingly, in the seventh year there should be abundant supplies from the sixth year’s harvest. If at all, it is with regards the eighth year to which the concern should apply.

As is often the case, the Torah alludes here to a profound psychological phenomenon – the ever-common syndrome known as “Anxiety.”

Mental health experts agree that there is a fundamental difference between fear and anxiety. Fear is a normal emotion that occurs when a person is confronted by an actual threat. Anxiety is a pathologic emotion that appears even when there is no real danger or legitimate cause for worry.

Sometimes anxiety is due to chemical imbalance and can be classified as an illness. In that case it may require medical attention. More often, however, the anxiety we experience in life is the result of insecurity and lack of faith in G-d.

A person of faith trusts that the Creator of all beings will take care of him, as is so plainly declared in the first chapter of the Grace After Meals, which we recite daily: “Blessed are you . . . who, in His goodness, provides sustenance for the entire world with grace, kindness, and mercy. He gives food to all flesh, for His kindness is everlasting . . .”

There is clear evidence that the worry in our lives is intensely affected by our theology. We cannot separate the two. A person who trusts in the Al-mighty is undoubtedly confident that no harm will become him as a result of his fulfillment of the Masters explicit commandments – the laws of Shmittah included.

On the other hand, the one who lacks faith, not only worries about the results of the Shmittah, i.e. the eighth year, but is concerned about the seventh year as well.

A study of people will confirm this intuitive Torah prediction. Many people of limited means are contented with what they have and live relatively tranquil lives. On the other hand, many in our society who are in possession of considerable wealth are paralyzed by fear and anxiety. What they need is a good dose of true faith.

Letting fear and worry take over comes from taking on responsibilities that belong to G-d. He has a plan for all of us, He is with us always. “Worry does not empty tomorrow of its sorrow, it robs today of its strength.”

So, when you are beset with worry, fear and anxiety, remember the words of Isaiah (41:10) “Do not fear, for I am with you; do not be dismayed, for I am your G-d. I will strengthen you and help you; I will uphold you with my righteous right hand.”

By placing our trust in our Heavenly father we will gain the strength and confidence to live healthy meaningful lives and focus on the true mission of transforming the world into a garden of peace and Divinity, with the coming of the righteous Moshiach BBA.

« Historic Meeting with NJ Shluchim and State Legislators
Shabbos at the Besht: The Rebbe and the 6 Day War »