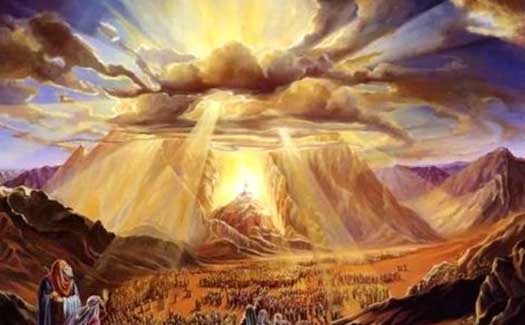 Weeping uncontrollably, a distraught mother one day paid a frantic call to a Chassidic Rebbe. “Rebbe,” she exclaimed, “It’s my son; he’s acting really strange; I think he needs a psychiatrist!”

“The matter?” cried the woman, “He’s behaving like a lowlife! He has been seen dancing with gentile women and dining on swine, SWINE! I’m telling you, he went Mishuga.

The Rebbe pondered the crisis for a quiet moment. “My dear lady,” he then declared: The good news is that your son is far from Mishuga.” The bad news is that he has become a vile and hedonistic young man.

“You see, if your son were to dance with pigs and dine on women, I’d say that he is indeed insane, but that’s not what you describe. What you present are the characteristics of unabashed ‘Sinfulness.’”

“No, no; your son is not crazy. He is rather crude and lascivious, and trust me, there’s nothing crazy about it. ”

Yankel appeared in Shul one day with both his ears heavily bandaged. “I was ironing a shirt when the phone rang,” he sheepishly explained. “That explains one ear,” blurted a fellow congregant, “What about the other?” “My luck,” came the reply, “The guy decided to call back.”

Ki Tisa: The afternoon of the day that the Torah was given, Moshe ascended Mount Sinai for forty days of solitude. He spent his time studying the newly received code with its Divine author. Waiting impatiently at the foot of the mountain was the Jewish nation, who mistakenly anticipated Moshe’s arrival on the thirty ninth day.

According to their miscalculation, Moshe had tarried in his return from the mountaintop. His absence led them to conclude that he was no longer alive and that they would never see him again. Convinced that they were left abandoned and leaderless in the desert, the Israelites, edged-on by the “Mixed multitude” (the Egyptian converts who joined the Jewish nation at the time of the exodus), panicked and completely lost their footing.

The people proceeded to press Aharon, who was left holding the bag, demanding that he produce for them “A G-d that will go before us.” Sensing the danger of the rebellious and volatile atmosphere, Aharon attempted to stave off an outbreak of anarchy and idol worshiping bacchanal, by stalling for time.

He requested that they donate their most prized possessions; the gold and silver garnered from the Egyptians, which now adorned their women and children. Yet, instead of the anticipated reluctance and procrastination, not a minute of time was wasted.

In a most unexpected response to Aharon’s appeal, the men gave of their highly cherished gold; the gold that represented their first taste of freedom in 210 years. They did not even bother with their spouses, as Aharon had anticipated; they used their very own stash.  And give they did; generously and passionately.

Aharon took the gold and heaved it into a large fire, with the unsolicited help of a few sorcerers, a Golden Calf emerged. Aharon set-out to build an altar before it. Then, hoping to buy some more time, he declared “A celebration for G-d tomorrow.” Perhaps by then Moshe will have returned.

But once again the people wasted no time. They arose early in the morning, brought sacrifices and began to celebrate. They danced around their newly created deity(s) and shouted, “These are your gods which brought you up from the land of Egypt!” (Exodus 32:8)

And so came about the most precipitous plummet from grace and splendor in the history of mankind. From the zenith of holiness and purity slipped a nation into the pit of sin and impurity – from the ultimate Divine embrace, to the depth of spiritual dearth and abyss. This no doubt, was the epitome of human decline.

Yet, grave as it might be, sin is after all human and at times is somewhat explainable. There can, for example, be many explanations for the dramatic downfall of the Jewish nation after their remarkable rise.

It may well be argued that after experiencing the highest level of Divine revelation and ecstasy during the giving of the Torah, the nation, having been forced back so drastically to a more mundane reality – made to wait 40 days without setting eyes on their revered leader and prophet – found themselves particularly susceptible and overwhelmed.

Their desire to draw close to G-d, one can imagine, was exceedingly powerful. Since Moshe had become the facilitator of this passion, every moment waiting for Moshe was like eternity. Another moment was just too long.

Additionally, they were subjected to the mixed multitude factor. Great people as they were, moved to follow the Jewish Nation into the wilderness; to face an unknown future and fate, these folk were exceptionally vulnerable when confronted with the trying experience at hand.

Having lived in relative comfort in Egypt; always under the hegemony and protection of a so called god, they fared the worst. They quickly lapsed into their old habits and wavered in their commitment.

It can hence be understood how the Children of Israel would fall prey to the hysteria of this internal influence. Given the above, why was this sin considered so insidious? And what is it about sin in general that is so despised in the eyes of G-d? Considering our human vulnerabilities, sin seems somewhat natural, perhaps even inevitable?

The answer is that while sin may be human, sinfulness is certainly an abrogation of our higher human character and potential.  Sin may be born out of simple weakness of character or error of judgment, but it quickly loses its innocence and inadvertence. The misjudgment soon becomes an obvious wrong and the weakness soon becomes advertent wanton.

The perpetuation of the sin at that point is no longer even a little excusable. When sin turns in to “Sinfulness,” it becomes a far more sinister act of rebellion and willful indulgence.

According to this description, it is rather obvious that the rebellion has spiraled into something far more sinister then from where it has all begun. As is typical with sin, what may have started as a somewhat explicable human weakness and misjudgment, has before long degenerated into blatant insubordination and defiance of the most cardinal transgressions; adultery, idol worship, and bloodshed. At this point there were no excuses. It was more than apparent that what was happening was wayward and rebellious.

It’s not what initiated the sin of the Golden Calf that constitutes its gravest and ultimate transgression; it was rather the fact that they proceeded to cling to this bad idea well after it’s malevolence and defiance was apparent as day.

How familiar is this pattern? How little has mankind learned from its own history? How often do we commit an improper act because we failed to withstand the temptation and in order to relieve our feelings of weakness and guilt, we defend our behavior with an assortment rationalizations and justifications, stubbornly standing by our misconduct? Yet denial of wrongdoing that comes after a sin is worse than the original sin, as it often leads to its repetition and even its permissibility.

Much as with the prototype of transgression; the sin of the Golden Calf, there have been a plethora of bad ideas and ideologies throughout the ages that have been stubbornly embraced by numerous peoples and cultures well beyond their perceived usefulness.

Many modern ideologies, such as Communism, various destructive forms of Socialism and secular Zionism, as well as some distorted forms of Judaism, which may have well been conceived in purity or innocence – or at the very least weakness and confusion – have been cleaved to, well after they have proven to be very bad and destructive ideas.

It is not their original inspiration that has made them so harmful and destructive, it is rather because they have continued to be embraced well after their ruinous and harmful nature has become exposed as the light of day.

Although weakness, or ignorance, cannot be condoned, especially when it results in harm to humanity and the violation of moral and Torah law, still, one who admits he has sinned at least has the opportunity to correct his behavior and minimize the harm. This is not possible when one defiantly rationalizes, justifies and otherwise cleaves to his blatantly erroneous ways.

No wonder that the prophet Jeremiah exhorts: “For this I will judge you, for saying ‘I have not sinned.” Rarely are our sins a matter of conviction, yet out of a sense of pride, stubbornness and convenience, we tend to cling to them, even when the spirit of folly and the fog of temptation has long worn off.

If only we had learned the simple lessons from the prototype of transgression – the sin of “The Golden Calf” – how different the course of history may have been.

It’s not too late!

May G-d awaken us with a spirit from above and open our hearts and minds to the truth of our misguided ways and to complete repentance. Our self honesty and repentance will certainly help bring an end to this bitter exile and hasten the coming of the righteous Moshiach BBA.