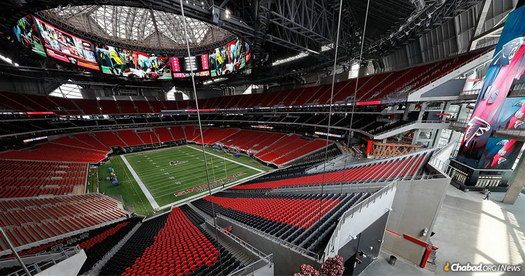 As east faces west in the Deep South, Chabad of Georgia is gearing up to host many of the thousands of Jewish visitors expected in Atlanta for this year’s Super Bowl. Capacity at the Mercedes-Benz Stadium is 75,000, but more than a million visitors are expected during the week of the biggest football event in America.

Los Angeles and Boston are homes to the second- and seventh-largest Jewish communities in the United States, respectively, and many fans of the Los Angeles Rams and New England Patriots attending the game on Sunday plan to go to synagogue on Shabbat.

“Chabad of Atlanta is working to ensure that all those arriving for the Super Bowl feel welcome,” said Rabbi Isser New, associate director of Chabad Lubavitch of Georgia. “We’ll ensure they have a place to pray, Shabbat meals and kosher food accessible near the game.”

Chabad Lubavitch of Georgia has launched a website (chabadsuperbowl.com) with information on local Chabad centers, services and kosher-food accessibility in Atlanta, a city with a population of nearly 500,000.

At Hartsfield-Jackson Atlanta International Airport—the world’s busiest, which is expected to see a further 33 percent increase in flight traffic for the Super Bowl—Chabad will have a presence at the airport’s information desk, with a “Tefillin and Info Booth” set up at the entrance to the baggage-claim area.

The city’s seven kosher restaurants are gearing up for the expected influx of kashrut-observing visitors, with many offering expanded menus featuring kosher takes on tailgate favorites.

On game day, Chabad of Georgia will throw a tailgate party with food and drinks outside the stadium, in addition to having tefillin on hand and holding afternoon Minchah services. The location of the tailgate and details about other Chabad events will be announced via chabadsuperbowl.com, and on Chabad of Georgia’s Facebook and Twitter pages.

“Thousands of Jews are expected to be coming to the city,” said New. “It’s an opportunity to further our mission: reaching out to every Jew in Georgia and helping them materially and spiritually.”