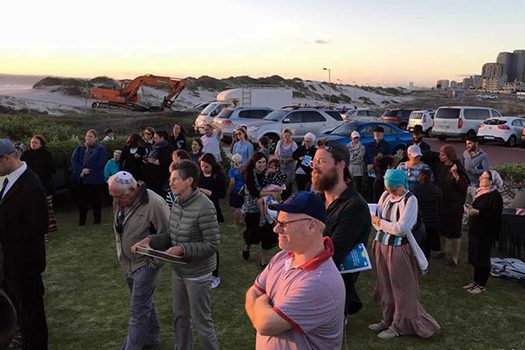 Jewish community members in Cape Town, South Africa, gather to pray as the city faces the imminent prospect of completely running out of water.

The Talmudic tractate of Taanit discusses protocol for fasts declared in ancient Israel in years of drought. The rituals included praying in the streets, shofar blasts and more.

As Cape Town, South Africa, faces the imminent prospect of completely running out of water, Rabbi Oshy Deren, co-director of Chabad of the West Coast, says he now views these ancient rituals as more immediately relevant than he ever would have imagined.

Cape Town, the second-most populous urban area in South Africa, was once lauded for its conservation policies, which were expected to stave off the need to find new sources of potable water. However, six consecutive dry years have proven to be devastating, and Day Zero—the time when the taps will be turned off for most residents of the city and water will only be available at centralized locations guarded by the military—is looming near.

Deren’s community recently hosted a sunset prayer for rain that mirrored many elements of the fasts of millennia gone by.

Standing at Dolphin Beach, north of Cape Town, watching the sun set over the (salty) water, 50 or so members of the community recited Psalms, sang and hoped.

It’s part of a wave of prayer sessions that have been held in the community that is staring down the prospect of losing their water come April.

“We have been praying, and we will continue to pray,” says Rabbi Mendel Popack, who founded Chabad Centre of Cape Town in 1976. “We are releasing a booklet with 30 days worth of short prayers, Talmudic teachings and meditations, so that our entire community can pray together wherever they are.”

Popack is also in the midst of working with donors and airlines to import a large shipment of sanitary packs that will allow people with very little water to wash themselves and maintain basic hygiene. Yet even as he and his community prepare for the worst, he says he still hopes for the best.

“Hope is very important here,” concurs Deren. “We were assured by the Rebbe [Rabbi Menachem M. Schneerson, of righteous memory] that South Africa would be a good home for our community until Moshiach comes. We used to see it as a blessing for political and financial stability, but now we view it in a broader sense—that we will be able to drink water and cook food, things we always took for granted.”

Sharing a Precious Resource
Meanwhile, he says measures are being taken to ensure that vital communal organizations will retain access to water, albeit in a more limited fashion. At the Sinai Academy, directed by his wife, Zeesy Deren, a self-sustaining system with a water tank is being installed, although the rabbi concedes that they do not know where they will purchase water to fill it.

In the school, they have begun a program known as “Thank, Save and Pray.” Before drinking a glass of water, students are encouraged to say the appropriate blessing to thank G‑d for the blessing of fresh water, save the extra water they do not need, and pray that there be more water for their community in the months and years ahead.

“Many synagogues up north,” says the rabbi, referring to the more populous city of Johannesburg, “are collecting funds and water to make sure that the most vulnerable among us will have what to drink.”

For now, he says, people are looking to adapt their homes and businesses to function in a reality that does not include running water and use as little water as possible that they currently do have. Dishwasher and bathwater is used to flush toilets, and showering is minimized to just enough time to get wet and wash off any soap.

“Like Jews have always done in times of crisis,” concludes Deren, “we do our best . . . and have faith in G‑d to do the rest.”