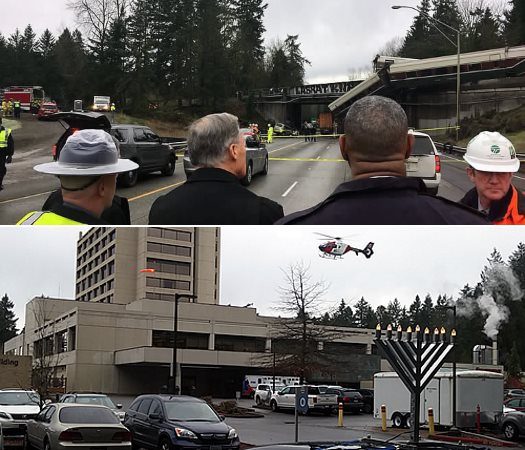 Shortly after he heard the news that an Amtrak train had derailed on Monday morning in the city of DuPont, Wash., Rabbi Yosef Schtroks, who co-directs Chabad of Olympia in Tumwater, Wash., headed for a nearby hospital where the injured were taken. “Realizing that this took place in my own backyard, that there are people suffering a terrible tragedy, my instinct was: ‘What can I do to help? How can I be supportive?’ ”

Rabbi Zalman Heber, a chaplain and director of Chabad of Pierce County, Wash., about 20 minutes from the site, did the same.

In its maiden southbound run as part of a new route, Amtrak Cascades train No. 501 went off the tracks shortly after 7:30 a.m. as it rounded a curve, sending rail cars onto the heavily traveled Interstate 5 below and leaving other ones dangling from a bridge above. Motorists who saw the derailment from the freeway rushed in to help where they could, even before first responders arrived.

In all, 13 of the train’s 14 cars, including two engines, wound up off the track. A number of them landed on top of cars and semi-trucks driving on the interstate during morning rush hour, harming those inside. About 80 passengers were on board the train, plus seven crew members. Nearly all of them were taken to local hospitals for examination; as of Monday night, three people who had been riding the train were reported dead.

“It is heartbreaking that fatalities have been confirmed in this morning’s passenger train derailment in Pierce County,” Washington State Gov. Jay Inslee said in a tweet on Monday after declaring a state of emergency in the area. “I cannot imagine the pain these families are feeling. They are in my prayers tonight, along with the families who have loved ones in our hospitals.”

‘Being There for Others’

Heber said “it was devastating to hear about this on the news—that a major train wreck happened outside of Tacoma. Getting to the scene was impossible because all the roads were closed, but the one thing I could do was go to the hospital where the victims were being taken.”

The injured were sent to hospitals in Tacoma and Olympia.

“Chaplains in the hospital are very important,” explained Heber. “When you have loved ones in the hospital, your whole life turns over. People want words of encouragement—words that can help them go through their crisis. They understand that you are not the doctor and cannot give them a remedy or cure, but it is of comfort that someone who cares is there, reassuring them that G‑d will provide assistance and healing.”

The rabbi left his number with families of the passengers being treated. He has also been in touch with other local chaplains to ensure that people get the help they need.

On Monday night, Heber hosted an outdoor menorah-lighting in University Place, a town in Pierce County—the county in which the train derailment occurred. About 50 people attended, adding a moment of silence for the victims and their loved ones.

And on Tuesday, he got a call from an Amtrak investigator who is Jewish; the rabbi will be bringing him kosher food.

Many of the injured were taken to Providence St. Peter Hospital in Olympia. It was there that family members spent the day waiting to see loved ones—and where some of them met Schtroks, who had heard about the crash from a congregant. He brought with him a book of Tehillim (Psalms) to recite prayers with friends and relatives, as well as menorah kits for anyone who wanted to light candles for Chanukah.

During a short break, Schtroks told Chabad.org that “people were in complete shock. It was a terrible tragedy. The fact that this was a first-time train run only added to the devastation.”

Indeed, it was the inaugural ride on the Port Defiance Bypass from Seattle to Portland, Ore., designed to make the commute faster for passengers. The train is owned by the State of Washington and Oregon’s Department of Transportation, and operated by Amtrak. An investigation into the matter, including questions concerning the speed the train was moving, is under way to determine the cause of the incident that injured more than 100 people.

“I think what touched people most was that they had someone to talk to, some comfort,” noted the rabbi, adding that it’s not just about words, but about being there for others in their time of need.

Said Schtroks: “The Rebbe [Rabbi Menachem M. Schneerson, of righteous memory] taught us to love every single human being just as we love ourselves.”