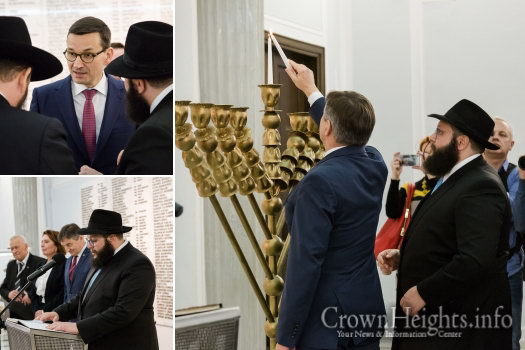 Last night (Tuesday), the Polish Sejm (Parliament) hosted two back-to-back festivities: The swearing-in of its new Prime Minister, Mateusz Jakub Morawiecki, and a candle-lighting ceremony in honor of the first night of Chanukah.

In his inauguration address, Morawiecki asserted that “This profound communal ritual is intertwined with our country’s legacy of aiding the oppressed and pursued. The wartime activities of the Żegota, the Polish Council to Aid Jews, like our Solidarity party, are testimony and symbol to the meaning of Polish character, to the meaning of community.” Immediately after the inauguration, the new Prime Minister delivered in person his heartfelt blessings to Rabbi Shalom Ber Stambler, Chabad shaliach in Poland, in honor of the Jewish Festival of Lights.

In the course of his address, Morawiecki referred to Israeli innovation as a model par excellence for encouraging and advancing new initiatives and developments that he plans to adopt as leader of the new government. “Our country will return to the playing field by encouraging new startups and initiatives. This was a country that laid the foundation of success to Silicon Valley in the USA, Israeli innovation, and German and Korean industry. We have to find our own golden path to success.”

Morawiecki also highlighted his country’s efforts to save Jews during World War II. “The battle for Poland is the story of simple, but outstanding individuals. People who manifested uncompromising courage and strength during dramatic world events, like the hundreds of thousands of Poles who endeavored to save their Jewish neighbors during World War Two; the valiant youth who battled the Communists in the 1920s; and the thousands of nameless fighters who stood up to the Communist regime.”

Morawiecki was elected Prime Minister of Poland after the country’s former Prime Minister Beata Szydlo tendered her resignation as party leader of the Law and Justice Party (PiS), following a national protest against legal reforms that she led and ongoing conflict with the European Union regarding immigration policies. Morawiecki, who formerly served as Finance Minister and was regarded as the most powerful figure in Szydlo’s government, was nominated by his party to replace Szydlo as party leader and thus succeeded her as prime minister of Poland, as well.

The Chanukah candle-lighting ceremony, which took place immediately after Morawiecki’s inauguration in the Sejm, was attended by Mateusz’s father Kornel Morawiecki, who is the founder and leader of Fighting Solidarity, one of the more radical splinters of the Solidarity movement in Poland and serves currently as Senior Marshal of the Sejm.  The Marshal of the Sejm Marek Kuchciński who was also in attendance and lit the menorah, tweeted immediately after the event, “The Sejm plenum to the light of the Chanukah menorah is testimony to the historical connection and mutual respect that binds Polish and Jewish communities together.”

Rabbi Shalom Ber Stambler, chief Chabad shaliach in Poland, pointed to the candle-lighting ceremony as the Polish response to recent anti-Semitic publications in the country: “Darkness is expelled with light. Tonight, an unequivocal message emerged from the government complex that represents all Polish citizens, a message of light, of tolerance, of mutual acceptance that is the answer to the extremist minority that, unfortunately, wishes to lead us all to places of darkness.”

Stambler likewise referred to President Trump’s declaration regarding Jerusalem, noting that “The Temple where the original menorah was lit was situated in the physical and spiritual capital of the nation of Israel, which is Jerusalem. Jerusalem is more than just a geographical location; Jerusalem represents, in both name and essence, a significant value, which is the value of peace. This value is expressed here this evening at the event that we are attending right now, thus binding this place to Jerusalem.” 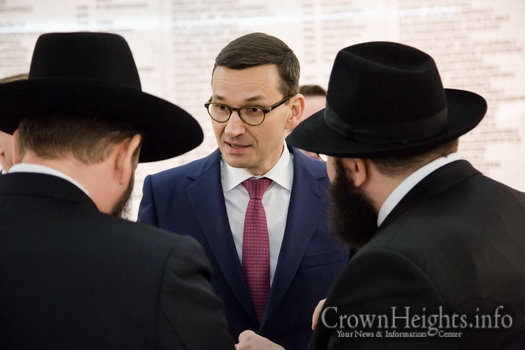 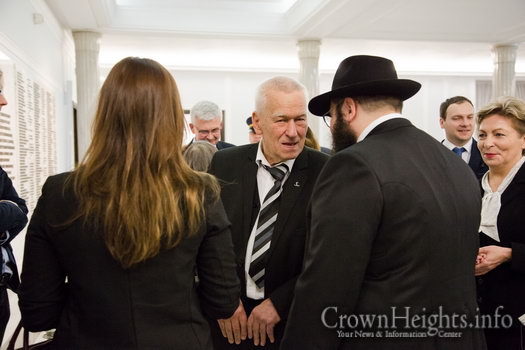 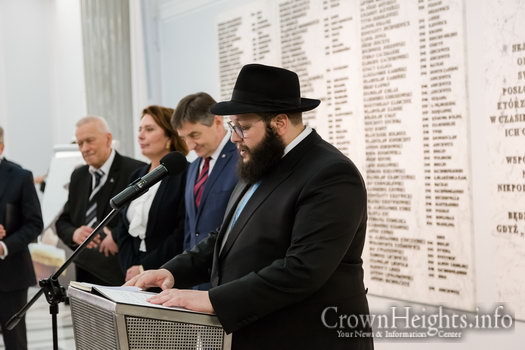 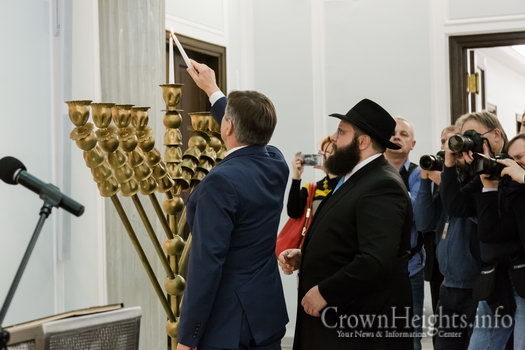