« Video: Discovering the Best Doughnut in Town
Sydney Girls Present ‘In the Merit’ » 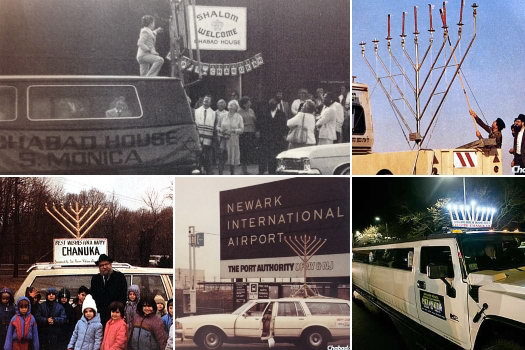 You know them when you see them, and when you see them, you know it’s Chanukah. The car menorah is a uniquely American innovation—a marketing gimmick created by young yeshivah students in the early 1970s as a way to spread awareness and the message of the eight-day Jewish holiday. Today, they can be found across the globe and on all kinds of vehicles.

Along with the giant public menorah displays that have become synonymous with Chabad-Lubavitch, these almost accidental inventions have revolutionized the way Jews celebrate Chanukah everywhere.

It was 1973, and the Lubavitcher Rebbe—Rabbi Menachem M. Schneerson, of righteous memory—had just a few years earlier announced his Chanukah-awareness campaign, encouraging his followers and emissaries to reach out to their fellow Jews and give them the opportunity to kindle the Chanukah lights.

At the time, Shmuel Lipsker was a student at the Central LubavitchYeshiva at Lubavitch World Headquarters, at 770 Eastern Parkway in the Crown Heights neighborhood of Brooklyn, N.Y. As he and his friends prepared to head back to their regular Chanukah spot—the corner of Fifth Avenue and 47th Street in Midtown Manhattan—the boys tried to think of something that might grab the attention of the thousands of New Yorkers who would be rushing by them over the course of the holiday.

“Now, you have to remember, this was before public menorah-lightings; the concept didn’t exist. It was such a huge attraction. We were giving out menorahs, and more and more people were gathering around us. By the time we lit our menorahs with the flares, we had a huge crowd. It was unbelievable—just a knockout.”

Late one night of Chanukah around 1975, the Rebbe was concluding an unscheduled farbrengen (informal gathering) at 770. Outside the synagogue were parked a handful of cars with menorahs attached to their roofs, the vehicles having all just returned from a long evening of distributing small metal menorahs and spreading Chanukah cheer.

By the 1980s, many of Chabad’s various innovative outreach methods had already been introduced. Public menorah-lightings were sprouting up around the country, including the National Menorah across from the White House, which was lit by President Jimmy Carter in the midst of the Iranian hostage crisis in 1979. And then there were the RVs—known as Mitzvah Tanks—outfitted with Jewish books, tefillin and Shabbat candles, and driven along the streets of Manhattan, which also helped prompt the appearance of car menorahs.

“Those early car menorahs were crude wooden things,” remembers Rabbi Mendel Feller, who studied in the Oholei TorahYeshiva in Crown Heights in the mid-1980s. “And we lit the menorah with flares, which looked great but was actually pretty dangerous,” continues Feller who today is rabbi of Upper Midwest Merkos-Lubavitch House in St. Paul, Minn.

Wood was upgraded to plastic PVC pipes until Sholom Ciment, an inquiring 19-year-old classmate of Feller’s at Oholei Torah, saw a yeshivah janitor fixing a broken brass radiator in the winter of 1987. He started asking the man questions, wondering whether he could similarly weld hollow metal tubes in the shape of a menorah, and whether they could run wires through it which they could connect to a car battery via the cigarette lighter.

Development of the car menorah, however, did not end in the 1980s. In the mid-1990s, Nochum Goldschmidt was a yeshivahstudent studying in Sydney, Australia, when he realized that community members were starting to become more reluctant about placing the still-bulky apparatuses on their vehicles.

« Video: Discovering the Best Doughnut in Town
Sydney Girls Present ‘In the Merit’ »