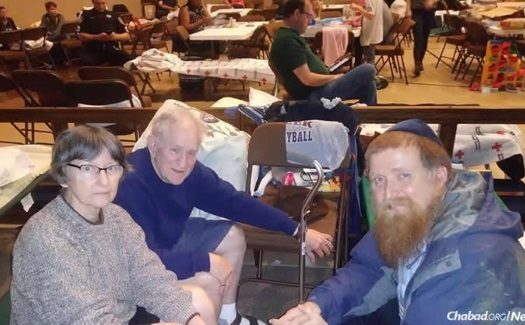 Rabbi Yitzchok Schmukler, right, visits with evacuees at a shelter in Houston.

Aside from Hurricane Harvey’s sheer destruction, for many of the millions in the Houston metropolitan area, the worst has been the not knowing. Not knowing where and when the flooding would stop. Not knowing whether going up to the attic was a good idea or a bad one. Whether to get in a vehicle and try to get to higher ground or to shelter in place. What has happened to family, friends, neighbors, homes, businesses.

Writing in Tablet, Rabbi Yitzchok Schmukler, who directs Chabad of the Bay Area in League City together with his wife, Malky, chronicles his thoughts, feelings and actions as Harvey bore down on his family, home, and community.

By late Saturday night, after terrifying, torrential downpours throughout Shabbat the thunder and rain intensified.

“We slept little. Who could sleep? Were we safe in our home? Our kids wanted to know. Our quaint neighborhood of Clear Creek Village gets its name from the small river that runs alongside it. Would our street flood? What about our neighbor Shlomi and his family? Shlomi is our close friend and the de-facto gabbai at our Chabad House. He, his wife, Samantha, and two small children recently moved into the neighborhood to be within walking distance of the Chabad House. Behind his house are beautiful woods that lead up to the creek.”

At 4:35 a.m. Shlomi texted Schmukler that water was coming into his house. An hour later water in his neighborhood reached the mailboxes, too high to evacuate.

“He’ll have to seek higher ground within his one-story house – but where? The attic. But you can get trapped in the attic.”

Later that day Shlomi and his family are rescued, soon joining the Schmuklers in their home, which sits on higher ground.

“Will our house still hold its perch above the floodwaters?” the rabbi worries. “The creek’s already broken through its so-called 500-year-flood levels. What will happen tonight? For the first time, I feel fear. Malky and I call the kids together and discuss our plan of action if we are compelled to do a midnight evacuation. The kids are a bit afraid but we assure them that this is only a contingency plan so that we can be well prepared.”

Food provisions are not endless, either. It’s not an emergency yet, but still needs to be managed. “Malky and the older kids have been doing an amazing job keeping everyone well fed despite creeping scarcity of food supplies in the pantry. I’m also grateful that our house has so far been spared and that we can help people, and I’m grateful for the strong emotional support we are getting from our family around the world.”

The next day Schmukler awakes to a startling realization:

“…we haven’t heard from [one of our friends] since the start of the storm. He lives alone and his house backs to a lake. He’s not answering any of his phones. I feel terrible as I think about the worst – why haven’t I reached out to him earlier? I start putting together plans for a search party. Before we head out, one last try.”