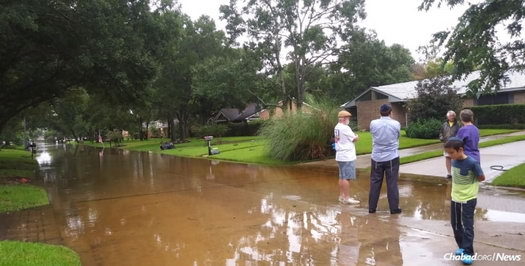 How Chabad is Using Amazon for Relief in Houston

For people who are looking for another way to help those impacted by the flooding in the Houston region, Chabad-Lubavitch Center, Texas Regional Headquarters has created an Amazon Wish List with basic items that are desperately needed as supplies run out.

Naomi Bier, 28, has lived in Houston for the last five years. She left her apartment prior to the storm to wait it out with friends on higher ground, and has since been spending her time volunteering at Chabad of Uptown, just up the street from where her friends live. Bier also leads the local chapter of CTeen (the Chabad teen network), and it was a WhatsApp group conversation with fellow CTeen leaders from around the country that yielded the Chabad Harvey Amazon Wish List.

“Teens want to get involved, but they want to actually contribute needed items,” says Bier. Among the requested materials are diapers, bleach, cleaning supplies and kosher snacks. Since first appearing last night, the link has been shared numerous times on Facebook and by word of mouth.

“The reaction has been amazing,” says Bier. “We’ve seen a substantial increase of donations on the Amazon page all day.”

Shipping services to Houston have not yet resumed, although there is hope they will before the end of the week. The volunteers have been in touch with Amazon, which has thus far said it is still waiting for a clear path into the city.

While food is of paramount concern in the short term, prolonged pantry items, snacks, hygiene products and cleaning supplies will be in crushing demand in the long weeks ahead. By then, hopefully, box after box of Huggies Diapers, Gorilla tape, Tradition Instant Noodle Soup, Clorox High Performance Bleach and other wish list items, will be arriving at Chabad’s doors for distribution.

“We’ve all been overwhelmed by people’s willingness to help,” says Bier. “We’re so thankful.”

To help fill their list, check out the Amazon.com page here.

Darwin, Australia, is separated from Houston, Texas, by the international date line, the equator and 14,882 kilometers of Pacific blue. Yet Gaye Shultz of Darwin is one of the many who have donated to Chabad of Houston’s relief efforts as part of local fundraising campaigns orchestrated by Chabad emissaries around the world.

Houston was hit hard by Hurricane Harvey, and continued heavy rain have meant flooding and devastation in many parts of the city. With kosher stores and communal institutions underwater, and kosher food running out in the city, Chabad emissaries are in the midst of coordinating kosher food convoys to be brought into the city once the roads are clear enough to allow trucks to enter.

“We live in a community where we are far removed from the Jews in Melbourne and Sydney,” says Shultz, who was born in the UK but has lived in Australia most of her life. “The hurricane made me realize that fellow Jews in Houston are experiencing hardship. It’s all about Jews helping each other, no matter the location.”

Since Darwin has no synagogue or Jewish communal organizations, Shultz and her husband, Ed, are served by Chabad of Rural and Regional Australia (RARA), directed by Rabbi Yossi and Malki Rodal, who are among many Chabad emissaries all over the globe to have held fundraising campaigns in their respective communities, with all funds being sent directly to the Houston community.

In the short-term, the concentrated efforts are on ensuring that people are physically safe and out of the water, fed, and accounted for. In the coming days and weeks, the focus will shift to rebuilding, as people return to homes ravaged by water and mold, accelerated by temperatures that are expected to reach 90 degrees in the coming days.

“Geographical distance is nothing in comparison to the connection that we have,” says the rabbi, who has reached out to 450 households across the Australian continent, asking them to donate funds for the community in Houston. “We see this on a daily basis as we reach out to Jewish people scattered all over Australia, and the same is true on a global level as well.”

As Houston Flood Waters Rise, So Does the Kindness of Strangers
by Faygie Levy Holt

Almost as soon as the half-foot of water receded from the Bellaire home of Rabbi Yossi and Esty Zaklikofsky and it began to drain from the surrounding street, there were knocks on the family’s door. Neighbors came by to help clear away any damaged sheetrock and carpeting from their home.

“People from all backgrounds, everyone was just knocking on our door offering to help,” says Rabbi Zaklikofsky, co-director with his wife of the Shul of Bellaire. “They spent hours here. It was an incredible display of human kindness. As soon as people heard about it through a neighborhood group text they were here.”

What made it even more special, the rabbi tells Chabad.org, was that he hadn’t even met many of the volunteers before. “I was speechless,” he admits. “I just expressed my gratitude to them for responding at a moment’s notice to a stranger. One of our friends spent seven hours here spearheading the whole effort.”

Neighbor helping neighbor has been the rule since the rains began falling in earnest last Saturday, and the calls for help have been increasing daily. On Tuesday, a pair of 70-year-old reservoir dams that protect downtown Houston and a levee in a suburban subdivision began overflowing, adding to the rising floodwaters from Harvey that have crippled the area after five consecutive days of rain. At least ten people have died and tens of thousands have been displaced. Officials have no real idea of when the life-threatening danger will end, when recovery will begin or how long it will take.

For now, with the official rescue channels inundated with emergency calls, some took matters into their own hands, taking boats through flooded water to rescue those in need. Others opened their dry homes to friends and neighbors who were not as lucky.

“For our home, personally, we are picking up the pieces and figuring out what to do next,” says Zaklikofsky. “At the same time there are areas of Houston that are just beginning to flood, which puts thousands of of more homes on a path to [potential] destruction. Our hearts go out to them and we pray to G‑d that this comes to an end as soon as possible so people are out of the path of danger.”

Among those who are now bracing to see what happens in their home are Rabbi Mendel Feigenson–co-director of Chabad of Sugar Land with his wife, Chaya–and three of his children. The Oyster Creek, which abuts his backyard, is rising and nearly over its banks.

“We are on the second floor and watching it very closely,” he says. “If the water starts rising we are going to have to leave. On the one hand, they tell us to evacuate, but the roads are flooded so we don’t have access to go anywhere. We are in the hands of Hashem.”

Feigenson is in constant contact with his neighbors and reports that many are in similar situations. “Everyone is scared and worried,” he says. “We encourage each other and people are just trying to ride out the storm.”

Yesterday, as the Brazos River, which feeds local tributaries in Sugar Land, began flooding, Feigenson made the decision to take the Torah scrolls out of the one-story Chabad House nearby and move them into the second floor of his home, which is where he and his children are staying. (His wife, who was in Israel and slated to return yesterday, is stuck in New York as there are no flights into Houston right now.)

“We are saying Psalms and praying,” says the rabbi. “We know that the G‑d is with us and it is my job to keep [my family] calm.”

Feigenson goes on to say that “this is one of the worst disasters, and it’s a big mitzvah to help the community get back together any way people can. People have lost their homes.”

Adds Zaklikofsky, “All help will be needed because the entire city has been devastated.”

To that end, the Chabad Houses from across the Houston area have banded together to organize and coordinate relief efforts. Among the tasks they are working on is coordinating volunteers from both within the Houston community and beyond the Texas border.

“People have already expressed an interest in coming to Houston,” says Zaklikofsky. “It’s an amazing display of humanity and ahavat Yisrael, unconditional love of a fellow Jew.”

“Trucks of kosher food have been put in place to come here from out of state,” reports Zaklikofsky. “And, we are gathering donations from anyone in the community who has supplies they want to donate, whether it’s canned food or cleaning supplies. At the same time, the Chabad Relief Fund will go out and purchase many supplies to be available as the [monetary] donations come in.”