« Fourth New Yeshiva Opens in Moscow
Chabad.org Relocates to Florida, For a Day » 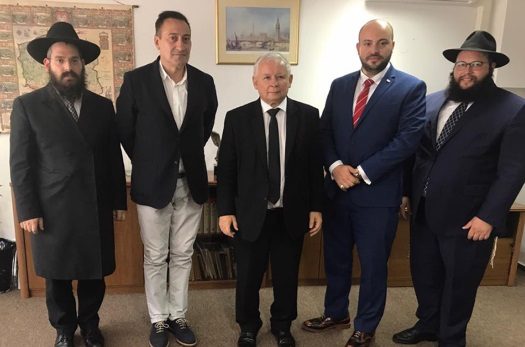 In an escalation of a feud among Polish Jews over a perceived increase in anti-Semitic rhetoric and the government’s role in stopping it, a communal leader called Jews who met with a ruling party politician his “court Jews.”

Last week, Artur Hofman, president of the TSKZ cultural group of Polish Jews, along with two Chabad rabbis –  Rabbi Shalom Dov Ber Stambler and Rabbi Eliezer Gurary, met with Jaroslaw Kaczynski, a founder of the ruling Law and Justice Party. Hofman dismissed claims about  rising anti-Semitism as part of “a political war” against Law and Justice.

On Monday Sergiusz Kowalski, who had alerted the government about anti-Semitism as the president of the Polish branch of the B’nai B’rith Jewish group, blasted the group who met with Kaczynski.

The meeting sent a “message that went into the world: ‘We very much have our Jews who love Law and Justice and we have anti-Semitism problem,’” Kowalski told the NaTemat news site. “Such court Jews were long used” by the authorities.

After the meeting with Kaczynski, 14 Polish groups and individuals  — including Michael Schudrich, the chief rabbi of Poland — co-signed a statement Sunday stating that the Chabad rabbis, Shalom Dov Ber Stambler and Eliezer Gurary, along with Daniels and Hofman, do not represent the Jewish community of Poland but at most “themselves or their own organizations.”

« Fourth New Yeshiva Opens in Moscow
Chabad.org Relocates to Florida, For a Day »