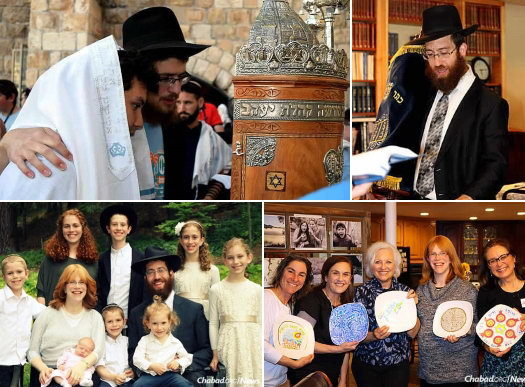 Back in April, Faigy Zwiebel organized a Jewish book event for kids at a Barnes & Noble store near Ashland, Oregon, and waited and waited for families to come. But nobody showed up.

She was about to pack her things and go when one woman arrived with her 3-year-old daughter. The Chabad-Lubavitch emissary recognized the pair from a December Chanukah story-time program, also at the bookstore. As they talked, the mother mentioned her 15-year-old son—at home on his iPad all day with nothing to do as summer approached.

“How about overnight camp?” suggested Zwiebel, co-director of the Chabad Jewish Center of Southern Oregon with her husband, Rabbi Avi Zwiebel.

The mother was open to the idea, but camps were so expensive. The Zwiebels offered to help raise funds for him, and of the many available Jewish experiences, the mother and son chose a CTeen trip to Israel and Poland, now in its second year.

“This was a teen who had no idea about Yiddishkeit—about kosher, Shabbat—he didn’t even know who Moses was. He only knew that he was Jewish. But he left excitedly for Israel, and just celebrated his bar mitzvah at the Western Wall,” reports Faigy Zwiebel. “It’s a spark. Hopefully, it’s a start for more to come.”

She pauses before adding: “That’s the thing about living out here. You never know who you’re going to reach.”

Rabbi Zwiebel concurs. “Ashland is isolated from any larger Jewish community, so our presence is so important and so pronounced. Most Jews we encounter haven’t met a religious Jew their entire lives or in the 40 years since they left the big city,” he says. He adds that they now have a regular Shabbat and Sunday minyan from their initial attendance of . . . one.

‘Lighting Up the Jewish People’

Los Angeles resident Naftali Burstein visited Ashland, Ore., in the summer of 2015 to check out an assisted-living retirement community that he was considering buying. But he had one hang-up about the city of about 20,000 people: Where were the Jews?

“I felt like it was not going to be very comfortable for me, especially since I was from Israel” and used to being immersed in Jewish life, relates the 39-year-old from Jerusalem.

As he was driving back to the airport in the evening amid the Siskiyou Mountains and tall coniferous trees, he happened to see a boy wearing a yarmulke and tzitzit walking on the side of the road. He later learned that his parents were Rabbi Avi and Faigy Zwiebel.

“I got such a twist,” says Burstein. “I felt, ‘OK, that is no longer a problem,’ and I was very happy because this was a great business opportunity.” He ended up purchasing the property, and has since been a frequent visitor to Ashland and the Chabad center.

The Zwiebels, the parents of eight children (they had a baby girl last month), have developed similar bonds with other Jews in rural Oregon who are grateful for a hub for prayer, celebration and learning in an area with few other Jewish options. That includes students from Southern Oregon University in Ashland.

“They are really lighting up the Jewish people,” says Burstein, who makes it a point to visit Chabad centers in other cities as well.

The Zwiebels (she is originally from Montreal; he is from New Jersey) moved to the bucolic area, about 5 miles north of the forested California border, in 2003. It’s remote—geographically and demographically. Ashland is over six hours from San Francisco, eight hours from Seattle and 10-plus hours from Los Angeles, some of the largest Jewish communities on the West Coast. (It’s even five hours from Portland, the most populous Jewish city in Oregon.) But they realized that “there was a tremendous need and opportunity” to serve the growing Jewish population there, says the 40-year-old rabbi.

Ashland, he notes, is a draw because of its arts scene, and educational and outdoor offerings without some of the downsides of life in an urban center, such as traffic, pollution and crime.

“People don’t move to Ashland to be part of the establishment; it has a very counterculture sort of vibe to it,” says Zwiebel. “People here don’t like institutional religion. They are looking for something authentic, and Chabad walks the walk.”

The city also attracts hundreds of thousands of visitors each year for its Oregon Shakespeare Festival.

“We are always open for Shabbat dinners. During summer time, especially, we draw Jewish visitors from all over—Los Angeles, San Francisco, Seattle, even Israel and South Africa, who come to the area on vacation,” says the rabbi.

Aside from welcoming guests, the Zwiebels say their primary focus is engaging with local residents—the rabbi estimates about 1,800 Jewish households in the area—many of whom have never really practiced Judaism.

Eric Spivak, 51, grew up in New Jersey but moved to Southern Oregon about eight years ago for the environment—the “lakes, woods and rivers,” he says. He loves to bicycle, kayak and camp. Conveniently, he and his wife, Wenonoa, now live near a swath of forested canyon, including Lithia Park, which stretches from downtown Ashland up towards Mount Ashland, the highest peak in the Siskiyou Mountains.

Spivak says he appreciates Chabad’s outreach efforts: “They take it upon themselves to find Jews who aren’t involved and keep that spark of Judaism alive by providing them with opportunities to engage in Judaic activities.”

For example, Spivak, an auditor for the local county government, and Zwiebel co-host a monthly brunch discussion group called “G‑d, Goat Herders and Life in the Internet Age.”

“We said, ‘Let’s start by looking at the five books of Moses and the struggles those people had, and try and apply the lessons learned to our own lives because human nature doesn’t really change much,” explains Spivak. “It’s a wonderful discussion group that brings in a wide variety of people with a wide variety of beliefs.”

Faigy Zwiebel notes similar success with the Women’s Circle, which offers a “feeling of closeness, of sisterhood,” she says. “Women really connect with each other, the activities and the learning.”

She also runs children’s programs for between 30 and 40 kids, and she sees things going in a positive direction: “Every day, we hear of more Jewish people; we’re growing our Jewish base. We try to provide and reach out to every single one of them.”

Two years ago, they bought their first building in what formally was a Starbucks coffee shop. They also built a beautiful state-of-the-art mikvah, attracting women from as far as 200 miles away who want to fulfill the mitzvah of family purity.

One of their biggest recent events was “Deli Night,” where they offered the likes of kugel, brisket, corned beef and chicken soup for sale, importing the meats from New York. They’ve run it three times in the past year, each one drawing more than 100 people in a place where kosher food is hard to come by.

“It was mobbed!” says Faigy Zwiebel, noting that it was so successful that they plan to hold it on a more regular basis. “We had an amazing response! It was incredible to see Jews coming out of the woodwork for a New York-style pastrami sandwich.”