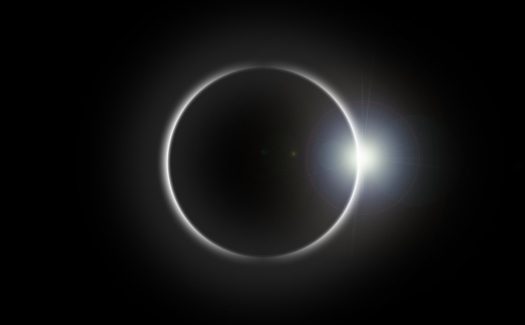 A total solar eclipse will streak across the United States on Monday, Aug. 21. In its 70-mile-wide path, people will see the sun disappear behind the moon, turning daylight into darkness, with trails of light streaming through the sky around the silhouette of the moon.

Millions of people are expected to witness the historic spectacle as the eclipse travels a path from Oregon to South Carolina. Chabad centers along its route will host informative and inspirational programs to provide a Jewish perspective on the event.

An awe-inspiring astronomical phenomenon that has captured the imagination of sages, scholars and scientists since ancient times, solar eclipses have a unique place in Jewish lore and law. In “Does Judaism See Solar Eclipses as Bad Omens?” Chabad.org’s Rabbi Yehuda Shurpin notes, for example, that while blessings exist for all sorts of phenomena—lightning, thunder, rainbows, earthquakes—there is no such blessing for witnessing an eclipse.

In the days leading up to the eclipse, Rabbi Hesh Epstein, co-director of Chabad of South Carolina in Columbia with his wife, Chava, will be giving a class on the view of the Lubavitcher Rebbe—Rabbi Menachem M. Schneerson, of righteous memory—on the subject of eclipses and Judaism. On the day itself, together with Rabbi Levi and Devorah Marrus, he expects to host members of the local community and tourists for a kosher lunch and viewing party, where men will be able to put on tefillin. A parallel event is being planned by Rabbi Israel and Shlomit Epstein for students at the University of South Carolina.

Epstein also plans to mail eclipse kits to community members in advance of the natural phenomenon. Included will be important safety information and viewing glasses, a menu of related Chabad programs, and suggested readings and Torah study.

‘Gearing Up to Serve Visitors’

One of the most popular viewing spots is Carbondale, Ill. Dubbed “the Eclipse Crossroad of America,” Carbondale is also on the projected path of the 2024 solar eclipse—meaning that it is the only place where people can observe both solar events in their entirety from the same vantage point. It is also the closest city to the eclipse’s point of the greatest duration (2 minutes and 41.6 seconds).

NASA observers will join an estimated 50,000 eclipse-chasers—twice the population of this sleepy Midwestern city surrounded by cornfields. And Chabad will be there to greet them.

“All the hotels are already booked solid,” reports Rabbi Mendel Scheiman, co-director of Chabad of Southern Illinois University in Carbondale with his wife, Yochi. “Because the eclipse is on Monday, people are expecting to stay all weekend, and we are gearing up to serve Jewish visitors.”

The Scheimans are preparing to hold Shabbat meals for an overflow crowd and are taking reservations for Shabbat services, something not regularly held in a city with an estimated 300 local Jews and about another 300 Jewish students at SIU.

Noting that little commercially available kosher food can be found in the area, the Scheimans have set up an online form for people to notify them of their attendance and Jewish needs so that supplies can be brought in from St. Louis and Chicago in advance of the big weekend.

Further on the eclipse’s northwestwardly path, Rabbi Zalman and Raizy Mendelsohn, co-directors of Chabad-Lubavitch of Wyoming in Jackson Hole, are preparing to host as many as 400 people for an Aug. 20 Sunday-night soirée with Eva Schloss, the stepsister of the young diarist and Holocaust victim Anne Frank.

Other Chabad events are being planned in cities along the route, including Boise, Idaho; Nashville, Tenn.; Charleston, S.C.; and Omaha, Neb.

“The sun may disappear for a few minutes,” quips Scheiman, “but we at Chabad are always here to serve, to bring light and warmth to everyone around us.”