« ‘We Don’t Have Children, But We Have Spiritual Children’
Here’s My Story: Extended Family » 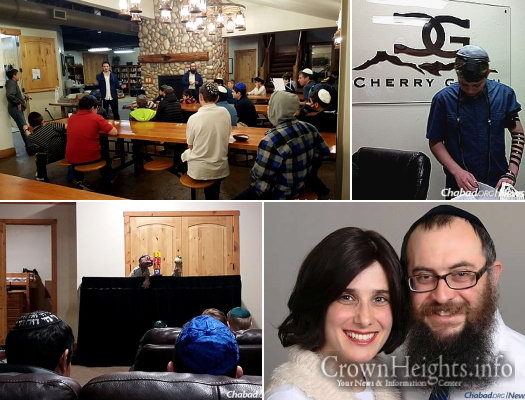 Rabbi Mendel Lifshitz started visiting Cherry Gulch, an Idaho-based therapeutic boarding school for boys, more than a decade ago. At the time, the school was looking for better ways to serve its Jewish students. The rest is history.

These days Lifshitz, director of Chabad Lubavitch of Idaho in Boise, makes the roughly hour-long drive to visit Jewish students on a weekly basis. The informal group gathers to talk about issues they face, particularly in a Jewish context, and about upcoming Jewish holidays. Bar mitzvah-aged boys put on tefillin. Lifshitz serves as a mentor and friend to the boys, offering spiritual guidance to those who are interested.

“What’s most effective and rewarding for me is seeing their progress, and having them recognize and feel that somebody really, genuinely cares about them,” he tells Chabad.org.

The therapeutic boarding school for middle-school boys has up to 50 students at a time, assisting them with a range of issues, including anxiety, ADHD, conflicts at home and educational challenges, according to Bernie Zimmerman, executive director of Cherry Gulch. “Our job is to reinvest them in academics, help them work through some of the family issues and work with the parents to help bridge them back home to get back involved in their community,” he explains.

Zimmerman says he appreciates the support the rabbi provides for students at the school (about 25 percent are Jewish), who come from all over the United States and beyond. Lifshitz visits weekly, planning activities for the boys and proactively keeping the school in the loop regarding the Jewish calendar. And a major venture is on the horizon: In June, a group of Cherry Gulch families are going to Israel, with the rabbi joining them on the trip.

‘A Source of Inspiration’

One father whose son graduated from Cherry Gulch in January, after arriving in August 2015, says the 15-year-old greatly benefited from being connected to the rabbi.

He says Lifshitz provided a sense of continuity, both Jewish and otherwise, as his son transitioned to boarding school. The rabbi met with him weekly to learn, schedules permitting. The teen also went to synagogue on Saturdays, and frequented Lifshitz and his family at their home for Shabbat meals.

“I think he found a source of faith, a source of inspiration in the rabbi,” says the father, a resident of Brooklyn, N.Y. “At times when he might be down and not having a good day, the rabbi would be there for him, would lift him up.”

The visiting families of the boys also join the rabbi, his wife Esther and seven of their eight children who still live at home for Shabbat services and koshermeals. Workshops take place four times a year at Cherry Gulch for the parents of enrolled students, and the Lifshitz family makes it a point to welcome the mothers and fathers who arrive in town to attend them. For families who don’t come to their home, Esther Lifshitz, co-director of the Chabad center, provides them with challah for Shabbat and with kosher food, if needed.

The boys are also regular fixtures at Chanukah parties, Purim parties and other holiday events shared with the broader Jewish community in Boise.

The Chabad Jewish Center, which started operating out of a storefront in 2004, now runs out of a standalone building about a mile away from the Lifshitz home. It offers Hebrew school, adult education, women’s classes, a children’s club, Gan Israel summer day camp and an array of other programs.

As for the rabbi, he often hears from former students after they’ve moved on to other places.

Says Lifshitz: “When I get an email two years later from a student saying, ‘Rabbi, we haven’t been in touch too much, but I want to thank you, and my life is awesome,’ it’s really heartwarming. To have that type of connection after a long time means so much.”

« ‘We Don’t Have Children, But We Have Spiritual Children’
Here’s My Story: Extended Family »