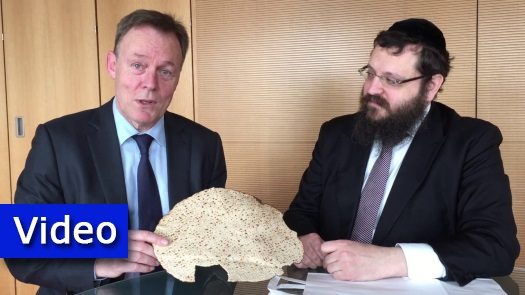 Thomas Oppermann, Chairman of the Social-Democratic (SPD)-Parliamentary Group, which is the second largest political party in Germany and presently in the midst of a fiery campaign for leadership of the country versus Angela Merkel’s party, met a number of days ago in the Bundestag in Berlin with Rabbi Yehuda Teichtal, Rabbi of the Jewish community in Berlin.

During the course of the meeting, they discussed the contents of a recently-published report documenting the rise in anti-Semitic incidents in Berlin during the year 2016, and Rabbi Teichtal offered Oppermann a taste of matzah in honor of the upcoming Ymotov of Pesach. Oppermann tasted the matzah and assured the Rabbi that his party will continue fighting anti-Semitism in the country.

In a video message recorded by the two at the close of their meeting, Oppermann is seen holding a piece of matzah and addressing Jews in Germany:

“My message for the Jewish people in Germany is that the German government and specially the Social Democratic Party stands for democracy, for European unity, for respect among people, for religious tolerance. We are fighting anti-Semitism, we are fighting intolerance, we want to live together in this society, and I will tell you that the Jewish community in Germany is a very vital part of our society. Together we will create a great future for our country and for Europe as a whole.”

In the joint Passover message with Teichtal, Oppermann adds, “Rabbi Teichtal is visiting me and he brings with him the Matzah. I’m happy about that because before the Pesach fest I will travel to Israel I will visit my friends I will talk with many politicians. I am concerned about the situation. I hope that Israel will be stable in the future, that peace will be stable. and that at the end people will get along with one another. to be there during the Pesach fest is a great opportunity.”

During the course of the meeting, Rabbi Teichtal expressed his appreciation to Oppermann for his continuous support and encouragement of the Jewish community.