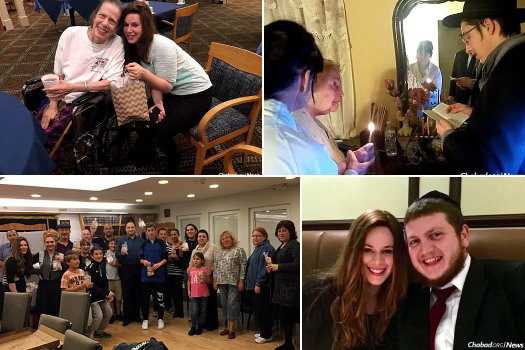 Winter in Illinois means a significant sector of the population stays indoors for the long haul. In fact, for many of the elderly in Des Plaines, a middle-class suburb northwest of Chicago, it’s not even a seasonal situation; they are confined to their homes or senior centers, limiting their connection to the Jewish community.

But a relatively new program aims to make their days a little brighter.

“Chabad Cares”—run by Rabbi Chaim Eliezer (Lazer) and Rivkah (Rivky) Hershkovich, both 26, of Chabad & F.R.E.E of Niles—organizes volunteers of all ages to visit area seniors wherever they may be. The center itself caters to a largely Russian Jewish elderly immigrant population who are ill and in hospitals, homebound, or living in nearby senior facilities and nursing homes—all looking for some communal connection.

The program came to fruition when, as a newly minted rabbi several years ago, Hershkovich returned to his hometown and discovered a real need. He would field calls from seniors, saying: “I came to Chabad for 20 years, but now I’m too old. Now you have to come to me. It’s too hard to get out.”

And so, the visits began. Hershkovich recruited a handful of people who grew up in Des Plaines, had attended Chabad & F.R.E.E of Niles (F.R.E.E. is short for “Friends of Refugees of Eastern Europe,” which has several branches in the Chicago area) and were looking for meaningful ways to help their Jewish brethren.

Among the earliest volunteers were Michael and Galina Center, and their two children—Jacob and Shoshana, now 17 and 20, respectively.

“We were looking for something good to do for the community and identified with the mission,” explains Michael Center. “It’s about helping the elderly, the homebound, the sick. You get people who are lonely, and Chabad Cares gives them a little bit of comfort when people come to visit and bring them meals or holiday gifts. Helping ease their loneliness was very appealing for us.”

The intergenerational program garnered quite a bit of success. When the rabbi got married in the fall of 2015 and relocated to Brooklyn, N.Y., it continued without him.

The newlyweds knew they wanted to be shluchim, but weren’t sure where they wanted to work with or with what population. They had several options, but lingering in the rabbi’s mind were the elderly residents back in Des Plaines. “On the one hand, there was an opportunity to work with youth and teens,” he says, “and here I was telling my wife about an opportunity to help the elderly and the sick.”

Rivky, a native of England, was ready to give it a try, and once back in the Chicago area, she understood why her husband wanted to return. “There’s a need here that isn’t being filled,” she insists. “We must take care of these people. We are here to do the work of the Rebbe [Rabbi Menachem M. Schneerson, of righteous memory] and make the world a better place.”

‘Knowing You’ve Made a Difference’

This past September—a year after their wedding and just before Rosh Hashanah—they moved to Des Plaines and began recruiting more volunteers. Their work paid off; they had the largest turnout ever organizing food packages for the High Holidays.

“We had 40 volunteers and were able to visit 200 people, each getting their own package,” says the rabbi. They set out to double that number for Chanukah.

Needless to say, the goal was accomplished: 400 people were visited by volunteers.

That didn’t surprise Michael Center, who has been involved with the organization from the get-go, recruiting friends and others along the way. “The rabbi is a very charismatic person and very enthusiastic,” he says. “When you meet him, you know he cares about what he is doing—and that is contagious.”

Plus, he continues, there is something very powerful and uplifting about spending time with seniors: “It’s not always easy dealing with those who are sick or elderly, but when you see the smile on their faces, you know you’ve made a difference.”

Adds Rabbi Hershkovich: “The Talmud tells us that ‘one who visits the sick person removes 1/60th of their illness.’ Through our many visits with the sick and elderly, my wife and I have continuously seen this to be true. When we speak with doctors at the hospitals or meet with family members of people we visit, they tell us the same thing.

“Our goal and mission is continuing to ensure that no Jew is left behind—that everyone deserves to feel a part of the community.”