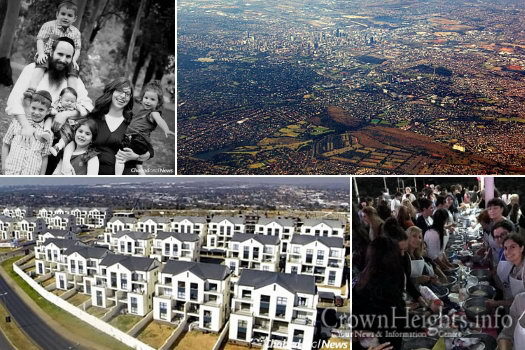 Greenstone Hill is a leafy suburb outside Johannesburg, South Africa—a community of new homes and developments that over the past decade has attracted many young Jewish families among its 6,000 residents. The neighborhood is only about six miles from the traditional center of Johannesburg’s Jewish community. But for many who have moved there, it’s a world away.

“Most of the Jews living in our area are not necessarily looking to connect to their roots,” acknowledges Rabbi Pini Pink, director of Chabad Greenstone, who recently made the short move with his wife and co-director Rochi, and their five young children from their home in Johannesburg. “A shul or Chabad House was not necessarily on their agenda when they moved into the area. In fact, some Jews I’ve come across have told me they moved here to get away from the Jewish area.”

And that, to the Pinks, is an opportunity.

Among the young couples who wanted to buck that trend are Mandy Weiner and her husband, Sean Meisel, who have lived in Greenstone Hill for eight years. In fact, they met the Pinks before September, before the emissaries moved to the area.

“We chatted with them about why we thought a Chabad could be successful in the neighborhood,” says Weiner. “There are far more Jews living in the area than we realized, and there is no shul within walking distance, so it is incredibly beneficial. It is so convenient to attend Shabbat services around the corner from our home, and it makes it far easier to take our kids along.”

The Weiners’ children—2-year-old Sam and 11-month-old Ruby—are now regulars at Chabad Greenstone, says their mother. “Most importantly, there is a sense of community, and the shul has unified the Jews in the area. We have met so many new families; there is a strong sense of identity.”

That, she says, is due to the Pink family: “They are fun, warm and welcoming—and that makes all the difference.”

Chabad boasts a long and considerable presence in South Africa, with 65 emissary couples in Johannesburg and Cape Town, as well as outlying communities. In Johannesburg alone, there are approximately 50,000 Jewish residents, while Cape Town’s Jewish population totals about 17,000.

Pink explains that South African Jews are unique in that “the majority consider themselves Orthodox even if they ‘don’t practice.’ I believe that for most Jews here, the main thing they are looking for is stability—in the government, in the country, and especially when it comes to crime levels.”

Greenstone Hill, he notes, is a much more secure housing complex, different than most residential areas in Johannesburg.

“Many seek peace of mind through spirituality and by connecting to their Judaism,” says the rabbi. “There is so much opportunity here to help Jews embrace that.”

“To reach out to people who have never had the chance to learn about their Judaism, Shabbat, Yom Tov . . . is new and exciting, both for them and us,” says the rabbi. “We want to be ‘The Shul for the Non-Shul-Goer,’ hoping to make everyone feel welcome and at home in the Chabad House.”

The couple makes it a point to say that all age groups are welcome at services and programs, and that they will offer a range of Jewish activities for those in the surrounding area.

With five children who range in age from four months to 7 years old, they timed their move so they were settled and ready to go shortly before the start of the High Holidays. They were rewarded with a great turnout for the new year.

“On the first day of Rosh Hashanah, for shofar, we had more than 40 people, with standing-room only,” reports the rabbi. “On Yom Kippur, we had a minyanthroughout the day.”

The couple is keeping up the momentum by opening their home on Friday nights for Shabbat dinner, inviting community members to eat, talk and celebrate. Rochie Pink, in particular, enjoys their Shabbat offerings because, she says, it serves as a chance “to bond and chat with the ladies.”

She’s working this month on starting an official women’s program, though she has already held some informal ones. In November, she accompanied a group of 25 local women to the annual “Mega-Challah Bake” event in Johannesburg, introducing them to members of the larger Jewish community.

Right now, though, say the Pinks, “it’s very quiet in Johannesburg. It’s summer, and many people are out of town.”

Leaving them with a little time to catch their collective breath and prepare for a full slate of programming in the year ahead.