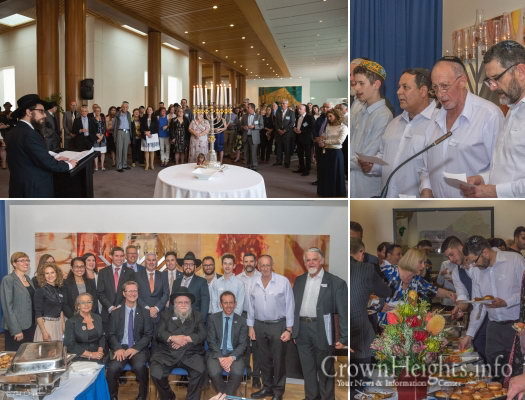 Chabad of the Australian Capital Territory (ACT) hosted their third annual (pre) Chanukah Menorah lighting and cocktail dinner celebration during the last sitting week for 2016 of the ACT Parliament’s calendar on December 14th.

Nearly 200 VIPs including members of Canberra’s Jewish community came together in the Parliament function room at what has become one of the largest annual celebrations of Canberra’s political, religious and multicultural leaders.

The event commenced with Chabad ACT Chairman and MC Rabbi Shmueli Feldman welcoming all the distinguished guests including Ambassadors and representatives from eight Diplomatic missions.

Rabbi Pinchus Feldman OAM, Head of Chabad of NSW who travelled to Canberra for the event then led an invocation prayer.

Federal Member of Parliament for Fenner (Northern Canberra), Dr Andrew Leigh was called upon to give Chanukah greetings. Dr Leigh praised the great work that Chabad ACT does not just within the Jewish community in Canberra but the wider community, giving examples of the innovative humanitarian programs including the clothes swap and food bank initiatives. Dr Leigh mentioned how blessed he felt at being at a Chanukah celebration and with three generations of Feldmans.

Alistair Coe MLA, Leader of the Canberra Liberals and the MLA who has been instrumental in establishing and supporting the yearly event, related some of the important messages of Chanukah and urged those present to rededicate themselves to shared Biblical values.

Minister Gordon Ramsay MLA, Attorney General for the ACT and representing the Chief Minister, who had just given his inaugural speech in the ACT Parliament the day before, spoke of the message of Chanukah representing education and the importance of enacting legislation that promotes good over evil and light over darkness. The Minister concluded his speech with reading out a letter by Bill Shorten MP, the Federal Leader of the Opposition, sent for the occasion.

Elizabeth Kikkert MLA, Shadow Minister for Multicultural Affairs, spoke about the lighting of the Menorah and how each day another light is kindled representing the concept of adding in light. Mrs Kikkert then declared that as a newly elected MLA, she commits to dedicate herself to the pursuit of always continuing to add in light. She concluded her address by reading out a message from the Prime Minister, The Hon Malcolm Turnbull MP, sent for the occasion.
His Excellency Shmuel Ben Shmuel, Ambassador of Israel to Australia, gave greetings from Israel and spoke of how the miracles of Chanukah which happened in the Jewish state of Israel over 2000 years ago, still very much influences in the modern day Israel.

Rabbi Shmueli Feldman then delivered a powerful message about Chanukah and suggested one of the reasons as to why the Chabad movement initiated public lightings near the halls of power throughout many countries in the world. (text of speech below.)

The Menorah was then lit by distinguished VIPs including local Government ministers, the Parliament’s Speaker and representatives of the Chabad ACT Board of Directors.

The Canberra and Regional Jewish men’s choir then gathered near the Menorah to lead the crowd in the traditional singing of the Maoz Tzur.

The formalities concluded with light music and traditional Chanukah foods and drinks catered by Canberra Kosher which were enjoyed by all.

Upon exiting, all guests were invited to take home their own Chanukiah set together with Chanukah brochures containing information on the festival and how to light the Menorah.

This event in the ACT Parliament followed an event held two weeks earlier in the Mural Hall of Federal Parliament of Australia in the last calendar sitting week of the year, which was hosted by all six Jewish Federal Politicians in the presence of close to 200 Jewish community members, Federal Members of Parliament and Senators.