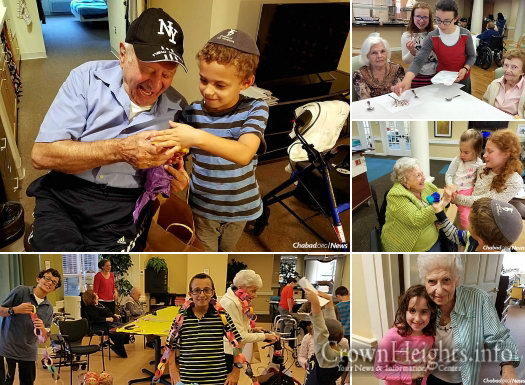 Noam Cahana, a sixth-grader at Rudlin Torah Academy in Richmond, Va., was very candid about the whole experience, from start to finish. “When my dad first advised it, I was saying to myself: ‘This is something only for Scouts.’ To my surprise, I really enjoyed it.”

He was talking about an after-school visit to an elderly residential home as part of a new program called Senior Circle, courtesy of Friendship Circle.

“Just to see that they are happy is one of many things I liked,” said Noam. “I also did some projects with them. Some turned out to be very nice.”

Not only did participation gain him credit from local Jewish Boy Scouts Troup 613 for a service project, Noam decided to go a few more times as well.

Dr. Sarah Kranz-Ciment, PT, DPT, is taking a bit of a different approach with Friendship Circle of Virginia, based in Richmond, two hours south of Washington, D.C. Rather than focusing just on children and teens with disabilities, the growing program reaches out to other friends as well, such as seniors.

“It makes sense with our new vision of building an inclusive community, one friendship at a time,” she says.

As founder of Friendship Circle of Virginia and director of the Ruderman ChabadInclusion Initiative (RCII), Kranz-Ciment has learned a lot about what inclusion means and how to implement it. RCII provides Chabad communities around the world with education and resources to advance inclusion of people with disabilities, so that all Jews feel welcome and valued in the community, the workplace, at home and in school. And like the hundred other Friendship Circle programs throughout North America, Friendship Circle of Virginia’s core program fosters companionship, social opportunities and friendship for children and adults with disabilities, their families and for the community teens who get involved.

One notable difference is that everyone are called “friends”—volunteers, those with disabilities, seniors and others—to classify participants in the same category. A strong focus, of course, is on involvement from the younger section of the Jewish population.

“We are empowering the youth in our community, with disabilities and without, creating friendships they wouldn’t have otherwise,” she says. “Inclusion becomes part of our community in every way. It’s not just about being nice to someone; it’s about making a new friend. Both sides learn from that.”

With Senior Circle, for example, about a dozen students from Rudlin—kindergarteners through the eighth grade—travel after school on Wednesdays to visit elderly residents of the nearby Beth Sholom Home of Virginia. They are accompanied by staff from the Friendship Circle and by a staff person from the home once there.

“They are people in need of friendship,” she says, explaining that the students, by way of getting to know the seniors, become comfortable in their presence. And after just a few visits—the program started in September—the kids felt confident enough to walk over, say hello and start talking, reports Kranz-Ciment.

As part of their weekly visits, kids bring gift packages with challah and grape juice. They work with residents on Jewish-oriented projects, for instance, sukkah-decorating during the High Holiday season and making crafts based on themes from the weekly Torah portion. A Chanukah celebration is also in the works. The wide age gap—students range from 5 to 13—emphasizes that “everybody has something to offer.”

The program lasts 30 minutes, so as not to overwhelm the children or residents. Often, say those involved, the session ends with residents in tears, happily holding the children’s hands.

Just recently, adds Kranz-Ciment, a resident turned 100 the same day one of the kids turned 8: “It was so powerful. Every time we go, it’s an incredible experience.”

‘It Opened Up Their Eyes’

Leah Yadin’s children—third-grader Maya and fifth-grader Jeremy—participate in the Senior Circle program at Beth Sholom. Yadin involved them because “children are children, and they tend to think the world revolves around them. They don’t often step outside their comfort zone. We thought this could open them up to a whole other world and give of themselves without getting anything in return. And they had a blast!”

In particular, she notes, the kids has the opportunity to meet a Holocaust survivor at the home. “It opened up their eyes. They thought it was amazing.”

Tehilla Sherman’s fifth-grader, Amira, also enjoys the program and the relations it fosters. “She comes home happy every time,” says Sherman, adding that those good feelings caused her second-grader, Ahava, to join, too.

Sherman mentions that Amira and another student were brought into the dementia ward one visit, and that her daughter was “proud of herself” and how she interacted with the residents there. “I love that they’re around the elderly. Kids can be scared of older people. They get over that; they learn to relate to them and realize that everyone has something to offer.”

“It’s an intimate experience to see someone so frequently and get to know them in this way,” she says. “It changes the face of the community.”