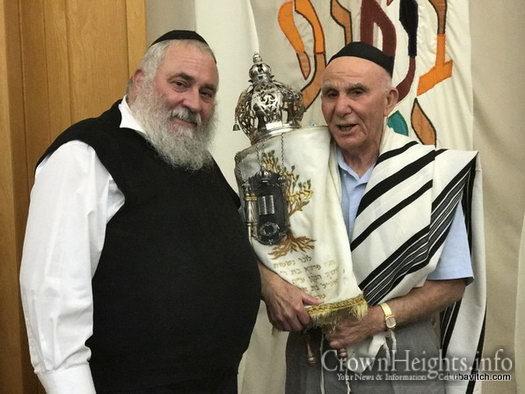 At 13 he was taken from his family by Germans who invaded his hometown of Bialystock, Poland in 1941 and sent to live in a ghetto for two years. Later, from age 15 to 17, he spent time in six different concentration camps. Midler, the author of The Life of A Child Survivor from Bialystok, Poland, credits his survival to his willingness to work. “Anytime they said they need people to work, I volunteered to go. It didn’t matter where or what the job was This saved my life,” he shared.

After the war, Ben moved first to Israel, then to Chicago, and finally to Rancho Bernardo where he joined the community and met Rabbi Yisroel Goldstein of Chabad of Poway. “For someone who has lived through the Holocaust, and yet thanks G-d every day for the miracles he has seen both then and now, is truly a celebration, not just for Ben Midler but the entire Jewish Nation,” said Goldstein.

It’s been 75 years since he turned 13, but Ben Middler has finally fulfilled his dream of having a Bar Mitzvah.