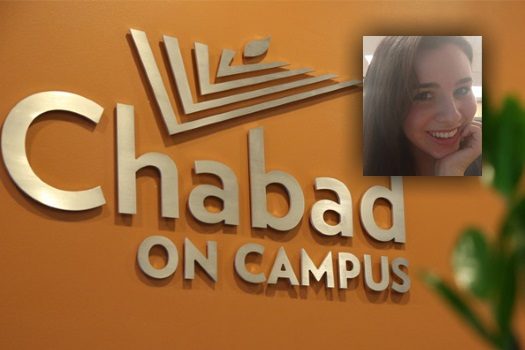 Before enrolling at U.C. Santa Cruz, Amanda Botfeld, a Reform Jew from Santa Monica, had never heard of Chabad. “I avoided Jewish spaces in part because I never felt like my level of Jewishness was ‘enough.’ Jewish community events are often intended to reaffirm your standing as an insider; I usually left feeling more like an outsider,” she wrote in an op-ed published by JWeekly. “But Chabad was different.”

When I first entered college, a Reform Jew from Santa Monica, I had never heard of Chabad. Apparently this makes me rather typical: According to a recently published landmark survey, the Hertog study of Chabad on Campus, the 80 percent of students who become involved with Chabad at their university have no previous experience with Chabad.

But, like the students in the study, I couldn’t be more grateful for the home and education provided by Chabad at my alma mater, U.C. Santa Cruz. The school acronym is UCSC; our whimsical, quick-witted Chabad rabbi called his house “JewCSC.”

The first time I went, I was dragged by a sorority sister to a Shabbat dinner. She had been begging me for months; I was resistant. I had never liked Jewish youth groups, and was a Jewish summer camp dropout. My expectations were that this would be geeky at best and cliquey at worst — probably both.

To my shock, surprise and comeuppance, my experience at Santa Cruz Chabad was nothing like the Jewish gatherings of the past. Previously, I avoided Jewish spaces in part because I never felt like my level of Jewishness was “enough.” I didn’t speak Hebrew, I didn’t have family in New York, and I didn’t know that you’re not supposed to eat leavened bread for all eight days of Passover. Jewish community events are often intended to reaffirm your standing as an insider; I usually left feeling more like an outsider.

But Chabad was different.

Even though many of rituals were foreign to me (I didn’t know the blessing for washing hands, for example), I felt like that was part of the fun. Lots of students were there with varying levels of Judaism. Lots of students came to learn.

Compared with most of my Jewish peers (although non-Jews came to Chabad as well), my familiarity with Jewish customs neared entry level, and as I began to attend more regularly, I made a few rookie mistakes. I didn’t know the tradition of not talking after washing your hands, example. One time, in a particularly embarrassing mishap, the rabbi’s wife asked to be in touch. So I immediately whipped out my cellphone and asked to input her phone number — completely oblivious to the fact that you weren’t supposed to do so on Shabbat.