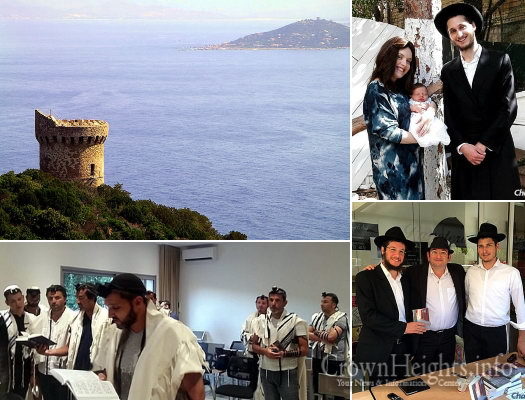 Every few weeks, Rabbi Levi Pinson takes the ferry from Corsica to Nice. It’s much quicker by plane, about 45 minutes, but Pinson needs to bring his car along so he can cram it with kosher food on the way back.

If you drew a line along the French-Italian border and then continued drawing south into the Mediterranean Sea, you’d miss Corsica by a cruise ship or two. Corsica is French, although neither the French nor the Corsicans seem particularly happy with that arrangement. Nationalist sentiment has surged and died on the island since its independence in 1729, which lasted until France took control in 1768. Corsica is more culturally aligned with Italy, whose language and traditions are similar to its own.

That includes the Omerta tradition, which saved hundreds of Jews during World War II and continues to aid the Jews of Corsica today. Omerta is the Mafia-like code of honor that runs through Italy, Corsica and Greece. When thousands of French Jews fled to Corsica after the Nazi takeover of France, the Vichy government came after them. But the authorities’ inquiries met unyielding silence—the Omerta of the Corsican locals, whose sense of honor would not allow them to betray the Jews who had found refuge in their homes and villages.

That code of silence continues to operate, as Rabbi Levi Pinson found out when he first started visiting Corsica some years ago. Pinson was there as part of the “Roving Rabbis” program that sends rabbinical students to remote Jewish communities around the world to provide smaller, unserved communities with religious services and support. Each time he asked a local if he knew any Jews he could meet, Pinson was given the cold shoulder—and no answers.

He laughs today when he recalls that initial experience. “Once they find out you’re not a bad guy, they are very friendly,” he says. “They’re honest and respectful people. It was scary when I first started, but then they warmed up.”

The French native moved to Corsica last month with his wife, Mushky, where they opened up the first permanent Chabad House on the island. He’s not the first Pinson to be doing Jewish outreach there—his father, Rabbi Yossef Pinson, executive director of Chabad-Lubavitch of Nice-Côte d’Azur, started visiting the Jews of Corsica more than 40 years ago.

The Jews of Corsica

No one knows exactly when the story of Jewish Corsica began. One theory suggests that Pasquale Paoli, the hero of the 1729 independence, persuaded Jews from Livorno to migrate to Corsica and aid in the island’s economic development. Sadly, that initial cohort assimilated, and no descendants are counted among the Jewish community today. Some of Corsica’s most prominent family names, such as Simeoni and Gabrielli, bear the legacy of those early settlers.

The next influx of Jews came from Tiberias in the early 20th century. Their safety had become imperiled when the region, then under Ottoman rule, was plunged into the chaos of World War I. The French allowed 800 of them to flee to Corsica and start new lives on the other side of the Mediterranean.

They set up shop in Bastia, the port city in Corsica’s north. The community seems to have transplanted their Galilean way of life with some success: They built the Beth Meir Synagogue, which continues to function; the nucleus of today’s Jewish establishment are descendants of those Tiberias refugees. Rabbi Yaakov Moshe Toledano, an Israeli minister in the late 1950s and early 1960s, was born and raised in the heart of this community.

When the elder Pinson started making visits to the island 40 years ago, the Bastia community was still the center of Corsican Jewry. Ajaccio, Corsica’s capital and its largest city, had some Jews but no synagogue. The rabbi, who has served as the Chabad emissary in Nice since 1976, always felt a religious/geographical kinship with the Jews of Corsica. He considered himself responsible for their welfare—a responsibility that he continued to bear throughout the years.

Eventually, he began sending rabbinical students in the “Roving Rabbis” program on regular forays into Corsica’s cities and towns.

Some four decades after Pinson first stepped off the ferry onto Corsica’s sunny shores, his son set up the first permanent Chabad House. The elder rabbi put up themezuzah at the opening ceremony.

Napoleon and the Tanya

Corsica had come across Chabad’s radar well before either Pinson was born. Rabbi Menachem Mendel Schneerson, the youngest son of the Rabbi Shmuel of Lubavitch—known as the Rebbe Maharash—and the brother of the Fifth Rebbe, Rabbi Sholom Dovber of Lubavitch, spent his last years on the island and passed away in Bastia in 1941.

In 1956, Rabbi Menachem Mendel’s great-nephew, the Lubavitcher Rebbe—Rabbi Menachem M. Schneerson, of righteous memory—arranged that the former be reinterred in Safed, Israel.

But Chabad cannot be said to have truly encountered a place until a Tanya has been printed there. Corsica is no exception. In 1985 (5745), an edition of the Tanya was printed in Ajaccio. Because this city, the capital, is the birthplace of French general Napoleon Bonaparte, this particular printing of the Tanya carried symbolic importance.

Rabbi Shneur Zalman, author of the Tanya, was unflinching in his opposition to Napoleon during the 1812 French invasion of Russia, a position that put him at odds with most of his rabbinic colleagues. He felt that Napoleon’s liberalism would sow the seeds for Jewish apathy. The Russians repelled the invasion, and the Napoleonic Wars began to reach their end. Two centuries later, Rabbi Shneur Zalman’s Tanya, which continues to stoke the flames of Jewish passion, was printed in the cradle of the vanquished French emperor.

The Corsica-Chabad-Tanya links go further. The first known translation of the Tanya—the seminal work of Chabad Chassidic philosophy—was into Russian (from the original Hebrew). The translator? Rabbi Menachem Mendel Schneerson, son of the Rebbe Maharash, resident of Corsica.

Pinson chose to open his Chabad House in Ajaccio. He explained that while Bastia is the historical seat of Jewish Corsica, a younger community has sprung up in the capital city that has been eager to see the stirrings of Jewish life that the Pinsons have prompted since their arrival. They have run programs for the children, hosted classes for their parents, thrown parties and held services.

Waves of tourists washed over the island during the summer, like it does every year. The Pinsons opened up a temporary kosher shop, stocked with food he brought over from Nice on the ferry. He has plans of opening a restaurant for next summer.

For now, though, the rabbi says he is focused on the permanent Ajaccio community. Many of them are former residents of France proper, anxious to set up their home on this Mediterranean paradise while still enjoying the benefits of French citizenship. There is a feeling that Corsica has remained free of the tensions that have gripped Jews on the mainland in recent times, and that it will welcome and protect Jews as it did in the 1940s—and like it always has.

The Pinsons describe Corsica as “one big family,” a laid-back place with an omnipresent social hum. But for them, setting up shop on the island is no holiday. There is work to be done. The Rebbe taught that France—symbolic of Napoleon’s toxic effect on religious belief and practice—is the final frontier in history’s long march to a world that accepts, and not rejects, G‑d.

“France is already transformed,” Pinson says with a smile, alluding to the Jewish revival there in the past decades. “Now, it’s only Corsica left.”