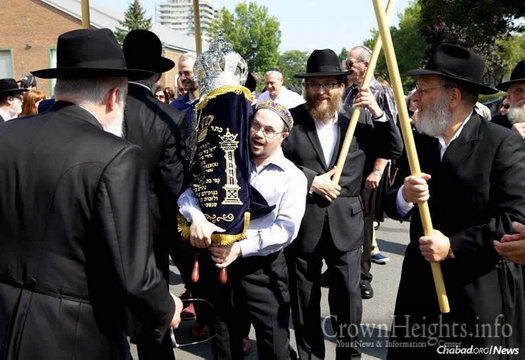 Ariel Melachy, shown here holding the Torah, has become a fixture at the Montreal Jewish Center. He announces page numbers for certain prayers during services, informs congregants of minyan times and makes other special announcements.

It’s Rosh Hashanah. The main sanctuary of the MTC (Montreal Torah Center) is packed with more than 1,500 men, women and children. Suddenly, a voice rings out: It’s Ariel Mechaly calling out the page numbers. An adult with Down syndrome, Mechaly has been a beloved and valued member of the shul—in an upscale suburb of Montreal—since a year after his bar mitzvah.

Mechaly was born in 1980. After an uneventful pregnancy, it was determined at birth that he had Down syndrome. Nevertheless, his mother, Rissa Mechaly says the diagnosis did not stand in the way of a life of full integration, maximum development and ongoing achievement.

The Mechalys were often pioneers in making sure that their son received the services needed to keep him in the mainstream world, helping to pave the way for others to follow.

In 1993, Mechaly participated fully in his bar mitzvah, reciting verses from hisparshah and the complete haftorah of Lech Lecha. Ever since his family joined the MTC one year later, Ariel has recited themaftir of his Torah portion with the enthusiastic support of the rabbis, Moishe New and Itchy Treitel. He never misses this opportunity.

“Ariel is a friend of mine whose company I enjoy and look forward to each week,” says Rabbi Moishe New. “He is pure love, faith, optimism and not without a good sense of humor. He is an inspiration.”

Mechaly enjoys giving a d’var Torahat his or a friend’s Shabbat table. He soaks in and stores many of the ideas given over by the rabbis, and relishes the opportunity to repeat them.

With appropriate responsibilities and boundaries, he has become a part of the framework of the MTC.

“Ariel loves to call the shots in shul,” says David Puterman, one of the synagogue’s gabbais. “With his amazing memory, when given the opportunity, he announces the pages for barechu, kedushah, modim, and all the holiday and Sabbathinserts. He also loves to announce what time minyan takes place the next day and any other special announcements. He is certainly well-loved in shul and has special relationships with many of the congregants.”

The MTC was born in 1991 in a mall, a five-minute walk from the Mechaly home. It was a one-room affair with the congregants switching the room from synagogue to kiddush hall in a manner of minutes.

From the moment he and his family began attending the burgeoning congregation, his extroverted personality, beautiful smile and warm hugs were the tools he used to make sure people knew he was there. In 2004, the MTC moved into its own building, and Mechaly’s position took on a whole new meaning.

The MTC practice is for people to spontaneously call out their sponsorship of the week’s kiddush reception after prayers. He often raises his hand in honor of his parents’, sister’s or niece’s birthday. He’s quick to remind everyone of the simchah and takes every opportunity to extend his speech longer than most.

“Ariel has an amazing memory,” notes Eddy Goldberg, the congregation’s other gabbai. “He surprises me with things that relate to the present that happened long ago. He will take as much liberty with his agenda as possible, but will respect real boundaries placed firmly before him.”

Then he adds with a wink: “Most of the time.”

Synagogue just wouldn’t be the same without him. Attests New: “Welcoming people like Ariel into the shul and having Ariel welcome people into the shul is emblematic of what we stand for: a home for every Jewish person to come closer to G‑d and His children.”