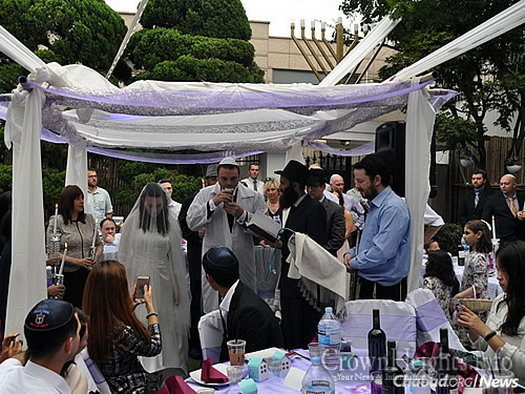 Pulling off a kosher Jewish wedding in the heart of South Korea may seem like a logistical nightmare. But Rabbi Osher Litzman, who directs the Chabad Jewish Community of Korea in Seoul with his wife, Mussy Litzman, jokes that “there are no logistical challenges here.”

And indeed, as he performed the nuptials of Rachel and Jeff Czerniak, who both teach English in the capital city, it would have been hard to guess that it was the first Jewish wedding the rabbi conducted since he arrived to the East Asian nation in 2008. The Jewish population there consists of several hundred people.

Litzman says it’s the first traditional Jewish wedding in Korea he is aware of.

“It’s very hard for us to leave Korea, even for a few days,” explained Rachel Czerniak in a pre-wedding interview. “Korean children work very hard to succeed academically, and school is open almost year-round. We planned our wedding to coincide with a three-day public holiday, so we could each take a full week off work.”

The couple had originally considered having the ceremony at Chabad and a reception at a different establishment, but the rabbi assured them that he would be happy to host the entire celebration, ensuring a fully kosher affair.

Since there is no commercial kosher catering facility, most of the food preparation was overseen by Mussy Litzman, who often makes meals for as many as 100 guests on Shabbat and the High Holidays. The traditional giant challah was the biggest she could possibly fit in her oven, and the meats were shipped from the United States. Other ingredients were brought by kind travelers who regularly ferry kosher staples for the Litzmans and the small core of kosher-observing locals.

Other supplies (including items for the lavish wet bar) were purchased at Costco, with the rabbi carefully inspecting all labels for proper kosher certification.

‘In Times of Joy’

In advance of their wedding, the couple, who grew up in Dublin and have known each other since high school, have been studying about Judaism and Jewish family life with the rabbi and his wife.

“We had a lot of learning to do,” said Czerniak, who was not raised observant of Jewish tradition, “but being part of the Chabad community has brought us closer to so many wonderful people and helped us appreciate Jewish traditions in a whole new way.”

One of those traditions is mikvah, immersing in “living waters” before a woman weds and then during marriage. Since Seoul does not yet have amikvah facility (one is in the planning stages), Mussy Litzman accompanied Czerniak to a deserted beach one night before the wedding to immerse in the Yellow Sea. “It was warm, humid and raining out,” reported Czerniak, “and the waters were mild. A really perfect beginning.”

Another first was the giant chuppah (canopy) that had been erected in the lush garden of the Chabad House, constructed of cloth on bamboo poles.

Czerniak, an accomplished artist, decorated the ketubah, or marriage document, inspired by a Jerusalem theme she had seen online, with Korean-style houses interspersed throughout the design.

As for music? It was supplied by a member of the local Jewish community who is adept with a number of musical instruments.

“That’s the way it is here,” said the rabbi. “We may be far from other Jewish communities, but we are very close to each other, and we come even closer to support each other in times of joy.”