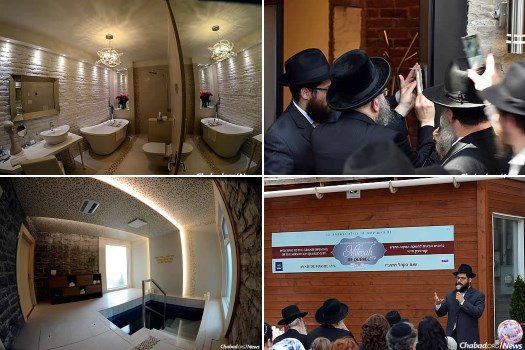 When Noemie Stanleigh arrived in Quebec City two years ago, the metropolitan area had been without a mikvah for decades.

She and her husband Yoni moved with their five children to Quebec City fromJerusalem for a training program, a fellowship that would move him forward in his career as a doctor.

When he first arrived to interview for that opportunity, he got in touch with Rabbi Dovid and Devorah Leah Lewin, co-directors of the Chabad House (La Maison Chabad Quebec City) since 2006. “What was important to us waskosher food, a Jewish school and a mikvah—the basics if you want to have a Jewish life,” says Stanleigh. “And Rabbi Lewin was the main address for all the questions we had.”

The Lewins helped them arrange ordering and shipping kosher food in from Montreal. Though there was no Jewish school, the rabbi offered a means to set something up together. As for the mikvah, the Lewins were working on it, but it was not yet underway.

Women would travel each month to Montreal—more than 150 miles and several hundreds of dollars away—for use of the mikvah there. Stanleigh says she sometimes went by bus (a three-hour ride each way) and even resorted to outdoor options for the past couple of years.

The mikvah is a fundamental mitzvah and a requirement for religious women; the laws of family purity and marital relations depend on it. That’s why it remains one of the first things built when a Chabad center is established, particularly in more remote locations where other options are limited. TheLubavitcher Rebbe—Rabbi Menachem M. Schneerson, of righteous memory—also emphasized that new mikvahs be constructed as attractive, aesthetic, modern facilities.

This June, the mikvah officially opened—one week before the Stanleighs left Quebec City to return home.

“I think if there’s any chance for the community to grow, the mikvah has to be there,” says Noemie Stanleigh. “It will make the Quebec City community stronger.”

The Lewins, who bought a building three years ago, have fostered a Chabad center that serves the area’s Jewish residents and students at the nearby Laval University. They put their mikvah plans in place after being matched up with a local couple interested in sponsoring it. They then found Canadian donors and worked with Mikvah USA, an organization that raises money for mikvahsacross the country. After obtaining a permit to move forward, construction began right away.

It took about a year-and-a-half to finish the mikvah. The week after Shavuot, Stanleigh spoke at the inauguration ceremony, which drew attendees from as far as Monsey, N.Y.

“I hope it’s a symbol of a new start for Jewish life in Quebec,” she says. “Hopefully, people will live there now and strengthen the community.”

Quebec City is the capital of the province of Quebec. The city’s population was estimated at nearly 550,000 in 2015, with an even larger metropolitan area of about 800,000. It is Quebec’s second-largest city after Montreal.

Founded 400 years ago (on July 3, 1608) by French geographer Samuel de Champlain, it is one of the oldest European settlements in North America. Surrounded by walls, with cobblestone streets and arresting stone buildings, the city has a decidedly European feel.

Since 1852, a small Jewish community has lived there, fed by a stream of European immigrants seeking better lives for themselves and their children. It was that same drive that ultimately lured most young Jews away from the French-speaking enclave to cosmopolitan centers in Montreal, Toronto and beyond.

By the 1990s, perhaps a few dozen Jewish households remained, mostly occupied by seniors. With synagogue buildings long shuttered and a virtually nonexistent next generation, it appeared that the venerable community was on its last legs.

About the time the Lewins arrived 10 years ago—he came to open the first Chabad House there and serve as community rabbi—the city was seeing an uptick in Jewish life. Today, a small but dedicated Jewish community calls Quebec City home (the Lewins know of at least 120 family units), with the new mikvah a testament to its perseverance and what’s sure to become a draw for others, including tourists.

Quebec City is a natural setting for the Lewins—both speak fluent French (she’s from Montreal; he’s from Paris)—and for Jews from France, those moving to work for the government, university, students and tourists.

They had their first child, a son, shortly after moving to Quebec City. “It was the first brit milah for a long time, and it was like G‑d planned it this way. It was really perfect,” says Devorah Leah Lewin (they now have four children). “Our community became our family; we share everything with them.”

And their presence as campus emissaries became popular right away. The students have appreciated a place to go for Friday-night dinners and kosher food, as well as the opportunity for Jewish learning at the Chabad House.

As for families, the Lewins offer children’s programming throughout the year, highlighting Shabbat and the Jewish holidays. Their focus is education for all ages, from child to adult.

With the addition of the mikvah, Devorah Leah Lewin can now start teaching in a hands-on way. “I couldn’t ever get into a concrete conversation about it because we didn’t offer it,” she says. “So, for my ladies, now is the time to really go ahead and start learning the traditions and mitzvah of mikvah.”

She has already taken a group of teenage girls for a tour, showing them the spa-like atmosphere and explaining the rituals. “I wanted them to be completely wowed by the preparation area, where you get ready for that special moment of immersing,” she says.

It’s going to be a larger part of her conversations with college students, she adds, as they discuss their futures as wives and mothers. And she’ll finally be able to point tourists coming to Quebec in the right direction when they ask for a mikvah.