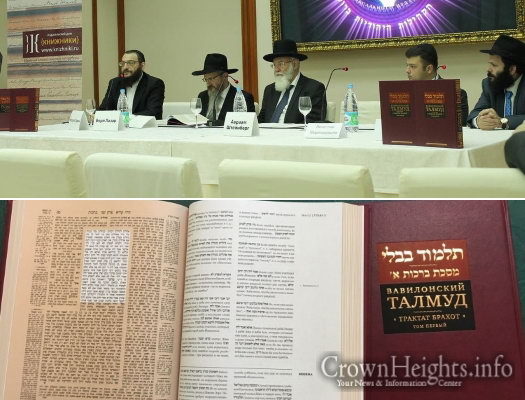 The translation will allow Russian-speaking Jews to build a stronger connection with Jewish texts, and also help to “dispel certain myths about the Jewish tradition among the general public,” said Rabbi Baruch Gorin, the head of the of the publishing house. “The opportunity to read the entire Talmud will change our social paradigms to a certain degree – this is not just a religious, but a social event as well,” he said.

Translated from Hebrew and Aramaic, the Russian Talmud edition will contain the teachings and opinions of thousands of rabbis on a variety of subjects, including Halakha (law), Jewish ethics, philosophy, customs, history, lore and many other topics. Until now, no organized translation of the entire Talmud was ever undertaken in Russian, and only a few single translated tractates exist. The entire Talmud consists of 63 tractates, and in standard print is over 6,200 pages long. “The Talmud is the treasury of Jewish thought, it’s our ‘time capsule’, ” rabbi Gorin said, “and of course its availability in Russian will provide Russian-speaking Jews a more intense learning experience and enable a deeper connection with their roots.”

The project was met with enthusiasm amongst the general public – according to Gorin, the first edition of 1,000 copies is almost sold-out, and the publishing house is already planning additional copies for print.

The Chief Rabbi of Russia, Rabbi Berel Lazar, warmly welcomed the newly-published volumes. “This is an unprecedented  project in Russian Jewish book-publishing world and it is taking the development of Jewish life in Russia to a new stage,” he said. Rabbi Lazar added that he hopes the new books will enable a “deeper search for the Truth” on all levels of learning.

The chief translator of the project is Rabbi Reuven Piatigorsky, who started the translation independently back in the 1970s. To compare, the first volume of the popular ArtScroll English edition of the Babylonian Talmud was published in 1990, and the series was completed in 2004.