« This Shabbos, Hatzalah Needs Our Help
Weekly Letter of the Rebbe: Unity Through Time and Space » 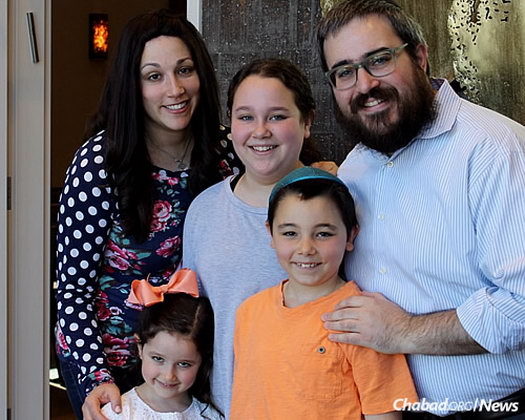 Cooperation among Jewish organizations is alive and well in St. Louis. More specifically, Chabad-Lubavitch emissaries have been working with other outlets for the benefit of the community at large.

Rabbi Levi Landa, program director of Chabad of Greater St. Louis, and his wife, Rivka, are part of Jewish initiatives that help engage and connect individuals of all ages. For the past two years, the 35-year-old rabbi has served as the peer-elected president of JPro, a professional association for those who work in Jewish organizations around St. Louis (locally referred to as JProStl), operating under the auspices of the Jewish Federation.

He handed the gavel over to the next president last week at the organization’s annual end-of-year networking event.

St. Louis native Rhonnie Goldfader and her husband, Stanley, have taken classes with Landa through Chabad. She says she’s not surprised that he’s been leading JPro. Rather, she expects they saw in him what she does, too. “He’s a man that teaches the beauty of Judaism—the beauty of the what’s and why’s. He talks about no judgements. A lot of people say that, but he walks the walk; he really does.”

A current professional development series at JPro called “The Power of Difference,” which explores how embracing difference leads to greater engagement, is one of Landa’s contributions. About a year ago, the board identified a need to create a shared conversation among the various organizations and agencies that make up JPro to enhance collaboration. This series brought the conversation to the broader community.

“Our differences—and we each have them—represent the sum of our experience and outlooks and unique gifts we each bring,” explains Landa. “By embracing them, we are demonstrating that every individual is important, eachmitzvah is valuable, and that each and every person has a role to play in making the world a better, more holy place.”

Landa first got involved with JPro at the end of 2010. He attended some events, and then Marci Mayer Eisen, director of the Millstone Institute, a leadership program run by the Jewish Federation of St. Louis, recruited him to be part of planning for a JPro conference to take place that following March. He didn’t know any of the other professionals at that first meeting. But after a few years, he not only made it to the board, but became its president.

“He’s wise beyond his years. He’s really earned the trust and respect of the professionals,” says Eisen. “He’s a great teacher, but he’s also an avid learner. He demonstrates humility, and he’s willing to step up and have hard conversations when he knows it’s for the greater good.”

After coming to JPro eight years ago, Eisen says she wanted the professional association to be more than just a networking arm. It’s one of about 15 JPro groups across the country, but it’s distinctive in that it has had a Chabad rabbi as its president and now part of its leadership.

Being involved, says Landa, has given him the chance to build meaningful relationships with a diversity of professionals who work in the Jewish community and beyond.

It has also offered him the opportunity to welcome groups from JPro to such activities as Chabad’s “Model Matzah Bakery” workshop, where professionals rolled up their sleeves, put on aprons and discussed the holiday of Passover while baking matzah. He held a session about Jewish jargon—Yiddish terms that professionals might hear while working in the community. The Landas also led one of JPro’s most popular programs: a hands-on lesson on making challah.

“I think it’s hugely important to partner with other organizations,” says the rabbi. “Sometimes, there are these walls, whether real or imagined, that exist between Jewish entities. So one of the things Chabad has been able to demonstrate is that there are so many opportunities for us to work together for the same goal.”

Parents and Children Together

Landa returned to the area about a decade ago with his wife to focus on families with young children. His parents, Rabbi Yosef and Shiffy Landa, moved to Missouri in 1981, when he and his twin sister were infants, to start aChabad House. Like other children of emissaries of the Rebbe—RabbiMenachem M. Schneerson, of righteous memory—he and his six siblings were an integral part of his parents’ work. Also like other children of emissaries, he left as a teenager to attend a yeshivah high school elsewhere.

Ordained at the Rabbinical College of America in Morristown, N.J., he spent time traveling as a “Roving Rabbi” around the country and the world with other young Chabad rabbis.

The opportunity arose to return to St. Louis to be part of an evolving scene for Jewish life. “My wife and I found ourselves gravitating toward the stage of life we were in,” he says. “My daughter was a year old, and we understood the lifestyle of young families. We wanted to create programming for other people to keep them active and engaged in Jewish life, in addition to teaching Torah.”

They developed “Mommy & Me” classes, and offered kosher cooking and music classes. The emphasis was on creating experiences where parents and children celebrated Jewish traditions together. “Ultimately, that’s what’s going to determine what kids swallow up in terms of Jewish identity,” he says. “It’s what they see at home, what they see their parents doing.”

Soon afterwards, his wife was asked by the local Jewish Community Center to run a “Mommy & Me” class there. That proved the beginning of partnerships across the board.

Eisen states in no uncertain terms that Landa has helped transform JPro.

“He always adds to the conversation in such thoughtful ways,” she says. “And he didn’t stop there; he participated in the Millstone Fellows, which is mainly for lay leaders, and in our leadership coaching training. He gives of himself and brings Chabad to what he gives. I feel like he’s always been a part of efforts to build community.”

Jennifer Schmitz, who was in the inaugural class of Millstone Fellows with Landa in 2012-13, says she had a chance to get to know him at a Jewish Federation conference they both attended. “He is very genuine and easily connects with Jews from different levels of engagement. He has a way of pulling people in.”

Eisen recognizes that and more. She knows how much he’s making a difference: “Rabbi Landa has touched so many different sectors—professionals, younger lay leaders. He teaches us by who he is and how he treats other people. He has shown the potential of what happens when Chabad rabbis are actively involved in the professional communities—not just promoting their own work, but actually being a part of envisioning what they look like, now and in the future.”

« This Shabbos, Hatzalah Needs Our Help
Weekly Letter of the Rebbe: Unity Through Time and Space »