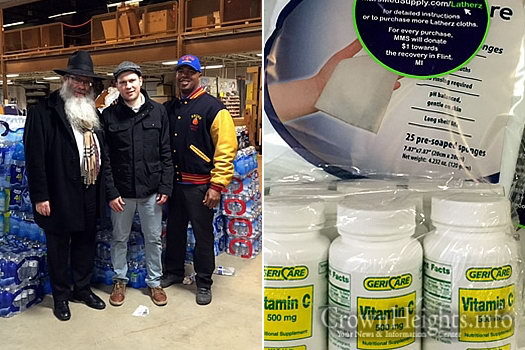 Families and children affected by the ongoing water crisis in Flint, Mich., will receive an innovative new bathing product designed for use with a minimal amount of water, thanks to the combined efforts of the Chabad of Eastern Michigan, the Jewish Federation of Flint and other local agencies.

The product by the Mars Wellness company, called Latherz, is an all-in-one bathing sponge with a water-activated soapy solution. A small amount of water (about 3 oz.) produces enough thick lather to thoroughly cleanse a child or adult. The solution is removed using a dry sponge or towel, resulting in a clean, freshly showered feeling with minimal water use.

After the city switched its water source from Lake Huron to the Flint River as the result of cost-cutting measures in April 2014, it was discovered that the new water supply contained dangerously high levels of lead. Despite a switch back to the previous water supply more than a year later, in October 2015, many of the pipes throughout the city had sustained serious damage that caused the lead to be leached to residents through the water supply.

It is estimated that nearly 10,000 children have been exposed to lead levels high enough to cause significant health problems, including skin lesions, anxiety and cognitive deficits.

Latherz, which can also be used as a shampoo, was originally developed for use with geriatric patients or others where traditional bathing can be difficult. It has also become popular with campers and hikers, as well as in developing areas where running water is scarce.

After hundreds of Latherz sponges distributed through the WIC Office of Genesee County received overwhelming positive reviews, a representative from Mars Wellness contacted Rabbi Yisroel Weingarten, director of Chabad HouseLubavitch of Eastern Michigan. He agreed that Latherz would be an ideal solution for the many people coping with the effects of the lead-contamination discovered in the Flint water system and contacted Steven Low, executive director of the Flint Jewish Federation, to coordinate the effort.

In another effort to help residents of the beleaguered city, a New York Jewish day school raised funds to purchase more than 200 bottles of Vitamin C, which is known to help block lead absorption in those who were exposed to the contaminated water.

After reading about the beneficial effects of this particular vitamin, the PTAChesed Committee of the North Shore Hebrew Academy in Great Neck, N.Y., organized a gaga/dodgeball tournament. The students wore orange in support of the initiative, which raised more than $2,000 for the cause. To help support the Flint economy, the vitamins were purchased through a Flint-based business, and will be distributed to residents by the Chabad of Eastern Michigan and the Flint Jewish Federation.

“The Rebbe [Rabbi Menachem M. Schneerson, of righteous memory] teaches us that our mission is to make the world a better place,” said Rabbi Weingarten, “and here’s an opportunity at our fingertips to do just that. We’re grateful to the Mars Wellness company and the North Shore Hebrew Academy for their help in accomplishing this mission.”