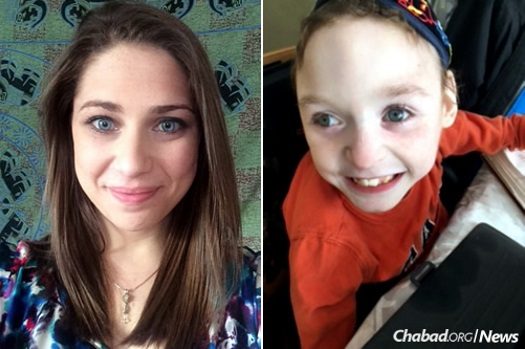 Ask anyone who knows him, and they’ll tell you the same thing: Seven-year-old Meir Samuels has the sweetest smile.

“It affects everything—Meir’s whole autonomic system, from his ability to swallow to his ability to blink his eyes to his blood pressure and body temperature—all the things we take for granted. It is all uncontrolled,” explains Rabbi Mendel Samuels.

“When he is not well, he rapidly ends up in the hospital. When he’s sick, he looks like a different person,” his father continues. “He’s in pain and just lays there. It can last a week or a month. We just don’t know.”

When the Chabad couple married nearly 24 years ago, they had no way of knowing they were carriers of the disease—one of nearly a dozen genetic illnesses more common among Jews of Ashkenazic descent. Today, notes Samuels, thanks to the efforts of researchers like Dr. Berish Rubin and his colleagues, who discovered the gene mutation that causes FD in 2001, doctors can test for it and other diseases as part of the Jewish Genetic Panel, including Tay-Sachs disease, Gaucher’s disease, Canavan disease and more.

The abilities and health of those with FD varies, but because Meir had a stroke when he was just a year old, he cannot walk or talk. His father says he can communicate a bit through sign language.

Frequent hospitalizations—and the need for constant care and nursing, along with specialized equipment that medical insurance does not cover—have taken an enormous financial toll on the Samuels family. Meir is the youngest of six children.

At one point, their insurance company stopped covering nursing care. The Samuels’ had to start paying for it out of pocket, which further put a toll on their finances.

‘Close to My Heart’

A few months after losing their nursing care, Rabbi Samuels made a trip to theOhel in Queens, N.Y.—the resting place of the Lubavitcher Rebbe, RabbiMenachem M. Schneerson, of righteous memory. There, he prayed and read a pan, a “request,” that he wrote.

Then he read his wife’s letter (she was home with Meir), incorporating a plea for help in this time of hardship and need.

The rabbi hadn’t even left when his cell phone rang. It was a representative from the insurance company, notifying him that their nursing care would be reinstated for 40 hours a week.

“I started crying,” recalls Samuels. “I said to the woman on the phone, ‘Have you ever heard of the Lubavitcher Rebbe?’ She said she had. I told her where I was and what had just happened, and she started crying as well.”

Still, there are many other things the family must cover financially.

After consulting with the couple, Deanna Lieberman, a special-education preschool teacher in Massachusetts, has created a GoFundMe account to raise money for Meir’s medical bills. Lieberman, a close friend of the Samuels family, grew up in Weatogue, Conn., and has known the family for 15 years. Her parents are active supporters of Chabad; in fact, her father, Andrew Lieberman, is currently president of the Chabad House directed by the Samuels.

“I’ve known Meir since he was born, and because both my mom and I are special-education teachers, this is close to my heart,” says the 23-year-old. “Meir has the biggest smile on his face, no matter what. And I have never met anyone as welcoming as the Samuels. They will give you whatever they have in a heartbeat.”

On the flip side, the Samuels aren’t exactly surprised that she is now giving to them.

“Deanna, following in the footsteps of her parents, has always been very close with Meir; they have a very special connection,” says the rabbi. “When she comes to town, she always stops by to visit with him. It is wonderful to watch how Deanna is so engaged with him. She has a special neshamah, a special soul.”