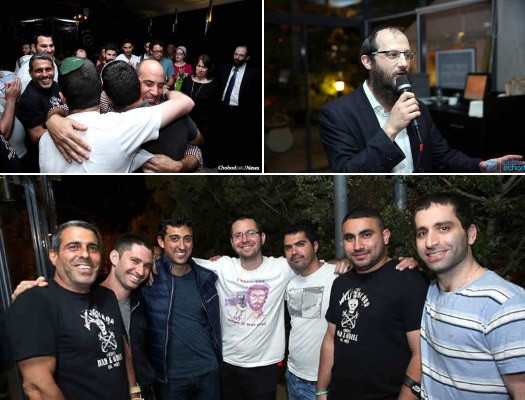 A special reunion took place in Israel—one that had the power to bring the strongest and bravest of men to tears.

Delegations of wounded Israeli soldiers who have traveled to New York City with the organization Belev Echad (“One Heart” in Hebrew) over the past several years came together to reminisce and reconnect over dinner on April 4. Rabbi Uriel Vigler, director of the Chabad Israel Center of the Upper East Side, whose community hosts the recovering soldiers in the United States, flew to Israel to be by their sides.

Belev Echad has been bringing wounded members of the Israel Defense Forces to New York City since 2009, so that they can take their minds off their physical and emotional struggles for a bit.

While in the Big Apple, they take helicopter tours, visit the Statue of Liberty and Ellis Island, enjoy sports games and see Broadway shows. The tour is sponsored by Chabad’s Upper East Side Israel community, which holds special Shabbatprogramming during their visit to recognize the sacrifices the soldiers have made and to shower them with appreciation.

This year, Belev Echad decided to hold a reunion in Israel. About 60 participants—trip alumni and supporters, including a handful who flew in from New York—met at Café Café, a popular restaurant in Givat Shmuel near Tel Aviv, to chat over pizza, pasta and salads. The event, which started at 7 p.m., ran until well after midnight.

“Everyone who joins in, they become brothers for life,” says Vigler. “When they bond on a Belev Echad trip or activity, they become friends forever.”

Each delegation—10 have taken the trip so far—has a WhatsApp messaging group so they can talk with each other, send pictures and joke around, he explains. Or someone will send a picture of something they did in Manhattan together, and that will spark a good memory.

“Years later, it still affects people,” attests the rabbi, adding that the experiences weave participants into the New York community. “These soldiers still feel a strong bond with our community, a strong love.”

That community is largely Israeli and readily identifies with the group, he says. “They all fought in the IDF, so they’re very familiar with soldiers. They embraced the idea from the start.” And their support goes beyond the trip itself: Community members help program alumni get computers for college and provide financial for other necessities, including prosthetic limbs.

One participant in the reunion who was severely injured in 2014 (and who asked to remain anonymous) relayed how before his trip to New York, he had “zero motivation.” He couldn’t even pull himself out of bed. “When he got back to Israel, he had the strength to enroll in college and rebuild,” reports Vigler, who adds that the organization sent him a laptop for his studies. “In his own words: ‘Belev Echad saved my life.’ ”

Meanwhile, the program has grown far beyond what Vigler initially imagined. This year, 50 wounded soldiers in four delegations are planning to visit the United States, with the next one, in May, the first to incorporate female soldiers.

“We see how much it helps,” says the rabbi, “and so we want to do more and more.”