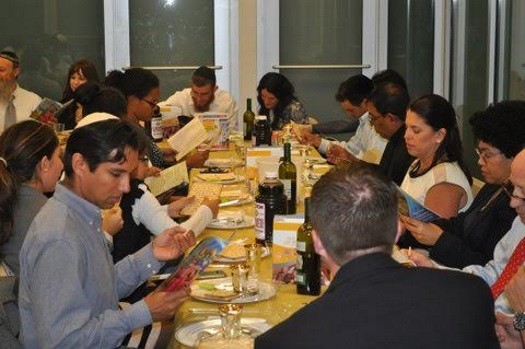 After meeting the students on their turf for the first time last week, Rabbi Mendy and Tzippy Weiss  wasted no time engaging those attending St. Thomas University, a private Catholic school. For the past 21 years, the Weisses have worked with the South Florida community nearby the university, but struggled trying to establish a Chabad presence on the campus.

With the growth of its Jewish student body drawn to its law school, the faculty has warmed to the idea and for the very first time, a model Seder for students and faculty was held on campus, on Thursday, April 14th.

Law student, Yisroel Silverman, who has previously worked as a head counselor at the Camp Gan Israel in Miami, was instrumental in introducing these changes.

The model Seder was well attended by more than 40 participants, including a priest, who expressed interest in seeing Jewish activity on the heavily Catholic campus. The Jewish Law Students Association (JLSA) and the law school were helpful in making the program a reality.