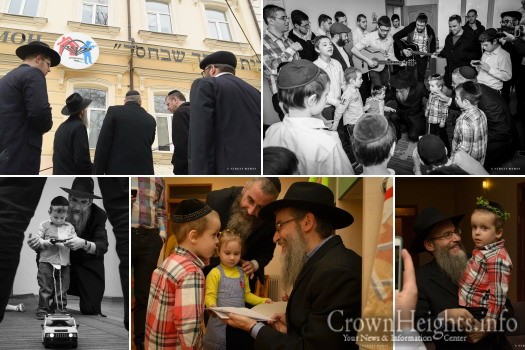 After an historic performance in Odessa, Ukraine, Avraham Fried toured the Mishpacha Orphanage under the auspices of Chabad Lubavitch of Odessa. The concert was beautiful, but the tour was powerful.

A routine morning for the children at “Mishpacha” quickly evolved into a day they will fondly remember. “Mishpacha” is an orphanage for Jewish children in Odessa and Southern Ukraine under the auspices of Chabad Lubavitch of Odessa. Currently, 80 children of various backgrounds call this amazing facility “home.”

As the children gathered at the breakfast table they were delighted to have Chassidic singing super-star Avraham Fried join them for the meal. Their surprise guest led the children in celebrating two birthdays. One birthday boy, Avraham, was separated from his mother when he was merely seven days old, and Yaakov started living at the orphanage at age two, after his father killed his mother.

The children proudly escorted their celebrity guest on a grand tour of their home culminating with an impromptu kumzitz with their all-time favorites: Aleh Katan Sheli, classical Jewish Russian songs and more. The singer gave out beautiful gifts, and even played games with the children!

Thank you Avraham Fried for your sharing your time with our special children.

If you would like to help the orphans at “Mishpacha” Odessa, please donate here: https://fjc.ru/centers/ukraine/odessa/.