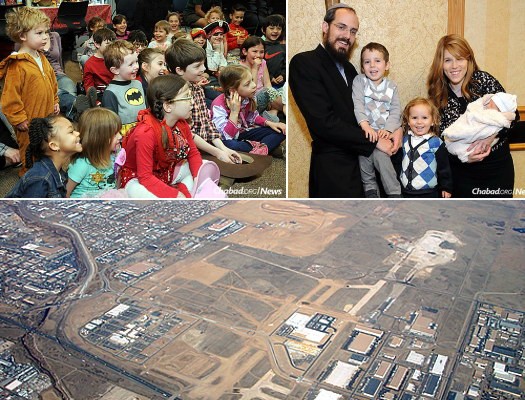 Life in Stapleton, Colo., is taking off—and so is the Jewish community in this fledgling town in suburban Denver.

From 1929 to 1995, Stapleton was the site of the Denver area’s airport. It was relocated and replaced by Denver International Airport, with the old property redeveloped for residential and retail space. The area remains a work in progress—a community in progress, literally called the “Stapleton Community.” It now consists of an enclave of nine neighborhoods, 50 parks, several shopping and business districts, and even its own visitor center. And, of course, there is now a Chabad center.

A mix of young families and empty-nesters have found a place here—and have been welcomed by Rabbi Mendel and Estee Popack, co-directors of the Jewish Life Center-Chabad of Stapleton.

The Popacks moved to Stapleton, about 15 minutes northeast of downtown Denver, in March of 2013, and immediately started creating a Jewish niche there. Planned to be fully operational this year, the “Stapleton Community” as a whole will be connected to the rest of the Denver metropolitan area, including the new airport, by a commuter-rail line currently under construction.

With this in mind, “our goal,” says the 34-year-old rabbi, “is to create a new center for Jewish life in North Denver.”

How will they accomplish this?

“One program at a time,” says Estee Popack, 31, who mentions that they are holding a family Shabbat dinner this Friday at Johnson & Wales University, the culinary-arts institution in Denver, hoping to get between 50 and 70 people.

The couple also works with graduate students at the University of Colorado’s Anschutz Medical Campus and Health Sciences Center, which borders Stapleton. About 3,000 students are enrolled in programs at the center, which has two hospitals with a third in the works.

Many of these students, faculty and doctors work on campus, and live in nearby Aurora and North Denver. (When the light-rail system is complete, it will connect to the Anschutz campus in Aurora as well.) Others have been coming to events and programs from surrounding neighborhoods as they hear of the Chabad House and an infusion of Jewish activity.

When they first began thinking of potential locations for their shlichus, “we had a vision for the type of community we envisioned ourselves in,” he says. Stapleton’s community is “young, fresh and vibrant, with no other immediate Jewish infrastructure. That offered the potential to make a strong impact.”

“Things just fell into place,” says the rabbi of the various opportunities, owing it to hashgacha pratis [Divine Providence].”

For example, they came to visit Stapleton several years ago during spring break, when students tend to be away. Nevertheless, Rabbi Popack happened to bump into a young man who was part of the student senate.

“I asked if there were any Jewish student programs on campus,” the rabbi recalls of the encounter. “He said he didn’t think there was.” He took the rabbi to the third floor to visit the office of student life and the director of student affairs, where the rabbi was able to propose some ideas about Jewish life there.

“She loved the idea of making that happen,” he recounts.

She put him in touch with a Jewish member of the student senate, and they discussed the idea of a Chabad presence on campus. “That became the foundation,” says the rabbi.

Tyler Scholl, 24, a pharmacy student at the Anschutz Medical Campus and student president of Chabad Jewish Student Life, says he often went to the Chabad House at the University of Colorado Boulder when he was an undergraduate. The rabbi there connected him with Rabbi Popack.

“They have all sorts of events now in Stapleton, and I try to attend as many as I can,” he says, adding that it’s been a nice way to connect with other Jewish students. “I think it’s really great that they have so many types of events for all types of people.”

“It’s very helpful for me and for other students to have them here,” say Scholl, who has been in the Stapleton area for three years. The campus, he adds, can feel dispersed since people come and go, and are really busy. “It’s nice to have them bring everyone together. And it’s been fun to see them grow and be part of it.”

“They make you feel at home, like family,” affirms the grad student. “You know they are always there if you need them.”

The Popacks, who have three young children, note that young families make up the majority of attendees at Chabad activities. As such, kid-friendly community events became very large very quickly.

For example, the couple expected 50 people at their first Chanukah event; instead, 150 showed up. The next year, that number doubled to about 300, and this past year saw nearly 400 people at a public menorah-lighting with a fire-juggler/acrobat entertaining the crowd.

Purim is up next, and this year’s theme, set in motion months ago, resounds even more with the Denver Broncos’ Super Bowl win on Sunday. “Purim in the Stadium” will actually be held in an enclosed event space overlooking Dick’s Sporting Goods Park, home of the Colorado Rapids professional soccer team. And it just so happens to be located right across the street from the most recently completed Stapleton neighborhood.

The Popacks hold services once a month in their home, in addition to Shabbat meals and smaller classes. All events have a Colorado health consciousness about them, with vegan and gluten-free fare cooked by Estee Popack.

She runs a small but growing Hebrew school, with about a dozen students so far. “There were new faces this year,” she says. “More and more people are always moving in.”

Her husband concurs, noting that “the growth has been very exciting. We’ve grown by 100 percent each year. Our goal is to service every Jew here, however we can.”

The rabbi grew up on shlichus in Denver and attended yeshivahs around the world, from Los Angeles to Israel to Australia. His wife also lived in different countries, including Guatemala, though it was in Colorado where she confronted her first “14er.”

Colorado has 58 mountain peaks that exceed 14,000 feet, known locally as “14ers”—more than any other U.S. state. Outdoor enthusiasts of all skill levels can find peaks ranging from easy to difficult, with hiking trails for exploring the state’s scenery, wildlife and rugged beauty.

“People are so into hiking; the outdoors is very popular here,” she says. To that end, the emissaries have instituted a community climb up a “14er,” a very Colorado thing to do.

‘Learning Into Our Lives’

Marianna Moss and her family moved to Stapleton in 2007. The rabbi first met them while dropping off some honey cake during his first High Holidays in the area; later, Estee Popack wound up communicating with Moss via Facebook.

“We immediately clicked,” declares Moss. “She’s amazing. She’s one of the kindest people I’ve met.” The two women even attended the International Conference of Chabad-Lubavitch Female Emissaries (Kinus Hashluchos) together in New York the last weekend in January; Moss went as part of the guest program.

Moss participates in women’s programming offered at Chabad of Stapleton, and says she learns a “tremendous amount.”

“It’s brought back Torah and learning into our lives,” she says of her family’s involvement with Chabad. “We now explain to our children that being Jewish isn’t just a label. It means something.”

Her two children, ages 7 and 10, attend Hebrew school there, something they used to balk at in a different locale. “Now, they look forward to going,” notes Moss. “The Popacks take them seriously and answer all their questions. They are treated like scholars.”