« A Baby Cry Interpreter? There’s an App for That
WhatsApp Goes Offline Worldwide » 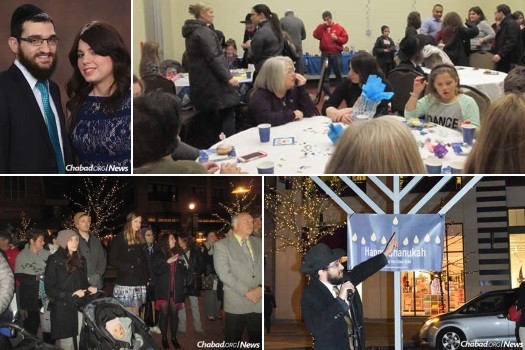 Like many young Chabad-Lubavitch rabbis, Rabbi Mendel Jacobs grew up watching and learning how to serve a Jewish community directly from his parents, who have run a Jewish pre-school in Cleveland for many years.

Now after almost a decade studying and serving out-of-town, he’s returned to the city he grew up in, after identifying a part of town that lacked a Jewish infrastructure and is helping to fill that need.

Last August, he and his wife Devorah moved from the Crown Heights neighborhood of Brooklyn, where she left behind family, friends and a community she has known for most of her life to set up shop, Chabad of the West Side, in Westlake, an affluent suburb in western Cleveland.

“Shlichus is something I wanted to do my whole life,” he said. “I always felt like I wanted to be part of it.”

“Because I grew up in Cleveland Heights, I approached Rabbi Leibel Alevsky, head Chabad-Lubavitch emissary to Cleveland, and asked him about opening a Chabad house on the West Side.”

Jacobs notes there is a booming community in East Cleveland with almost 90,000 Jews. A number of Chabad centers serve that area, and it’s known as a thriving Jewish community with Jewish schools, synagogues, and kosher restaurants.

The city’s West Side has always had a much smaller Jewish population and relatively few Jewish facilities and programs. So Jacobs started by making phone calls to find Jews who are not connected, and “people have really been responding,” he said.

“At first, many don’t see the point of being involved in Jewish activities,” said Jacobs. “But we reach out and invite them to experience some of the beauty of what Judaism has to offer, and there’s been a great response.”

Jacobs offers a weekly Torah-portion class and recently held a Friday-night service with about 20 people. For High Holiday services, they rented space in a nearby community center.

“We had a nice turnout,” he said, with about 30 people who otherwise “probably wouldn’t have gone anywhere for the high holidays.”

“Things are happening a lot faster than we expected.”

Malcolm Weiss, a retired physician, read in the newspaper about Chabad’s High Holiday services on the Westside and, “decided to try it out,” he said. “From there I became involved.”

He now attends Friday-night services, Torah classes on Wednesday nights with about a dozen people, and on Sundays he and a group of men gather with the rabbi to put on tefillin. “He re-introduced us to putting on tefillin and now I sometimes do it on my own,” Weiss said.

“I think he’s doing a good job trying to bring Jewish people back into the fold and reignite a spark.”

A Fledgling Hebrew School for the Kids

Devorah, who was born in Brooklyn, moved with her family to Manchester, England, at age 10 before returning to New York as a young adult, recently started a small Hebrew school with a few students. “We are expecting to grow from there,” she said. “I’m really enjoying it a lot,” she said of being on shlichus. “Building a community from scratch is one of the most rewarding things you can do.”

She added, “Obviously, it’s hard at times. I’m away from everybody that I knew. All my family and friends are very far away so that’s pretty hard.” But she tries to stay focused on her mission. During the high holidays, she said she met quite a few women interested in getting together, so she is starting a Woman’s Circle.

She said that several parents she met expressed interest in their kids learning Hebrew and about Judaism, so she started to teach them.

Meredith Miller, who is originally from New York and now lives on the west side of Cleveland, said she heard that a Chabad house was opening, and she wanted to get her 5-year-old son tutored in Hebrew. About six weeks ago, they started meeting with Devorah at the local public library.

“It’s the most amazing thing I’ve ever seen,” she said of her son’s lessons. “He loves Hebrew, he’s singing songs. It’s amazing. He can’t wait to go. It’s so positive.”

“I was so excited when I heard that they were going to be here,” she added.

A Packed House on Friday Night

Meredith marveled how at a recent Shabbat dinner at the Jacobs’ home, more than two dozen people gathered. “The house was packed,” she said.

It was right after the attacks in Paris, so everyone was abuzz with the news. But the rabbi tried to keep his guests focused on the beauty of Shabbat.

“They really have a made a big impact in a really short time and are doing such wonderful things for our neighborhood.”

Rabbi Jacobs studied in various Chabad schools, from Michigan to Manchester, and received ordination at the Central Lubavitcher Yeshiva in Brooklyn.

He recalls that he met the Lubavitcher Rebbe, Rabbi Menachem M. Schneerson, of righteous memory, when he was a very young child, receiving dollars on Sundays and booklets on chassidus that the Rebbe would distribute on special occasions.

“I’ve learned in Chabad yeshivahs throughout my life and everything that I know is shaped by the Rebbe’s perspective,” he said. “The biggest privilege I have is to share that with anyone I come in contact with.”

Jacobs says he often share advice that the Rebbe has given to those who faced challenges, telling them, “Just look at the successes in your life, focus on them, and you’ll realize how important your mission is.”

“The Rebbe is telling me the same thing,” says Jacobs.

That inspiration is shared by newfound friends and supporters. “He has his work cut out for him,” notes Meredith Miller. “But what he’s doing is going to revive the community. There’s really a need.”

« A Baby Cry Interpreter? There’s an App for That
WhatsApp Goes Offline Worldwide »