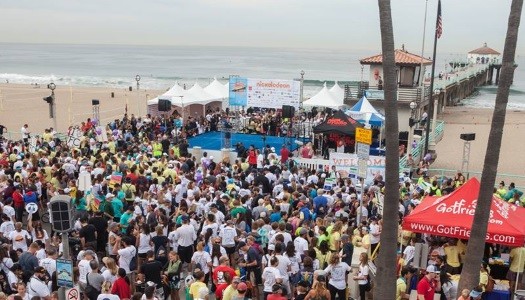 The Friendship Circle of South Bay in Los Angeles, founded and directed by Rabbi Yossi Mintz, raised a whopping $1.4 million during its 7th annual Pier to Pier Friendship Walk, which is sponsored by Skechers. The walk was attended by over 12,000 people.

Skechers said today that its annual Pier to Pier Friendship Walk, held last weekend, raised more money for children with special needs than ever before.

The Manhattan Beach, Calif.-based company’s foundation raised about $1.4 million to support the Friendship Circle, surpassing its goal of $1.2 million.

“The wave of support that climbs year after year in honor of our kids is incredible,” Michael Greenberg, president of Skechers, said in a statement. “When we started the Skechers Pier to Pier Friendship Walk seven years ago, 1,800 of us hit the beach to raise $220,000 — and since then, our walkers have grown six-fold — with more than $5.5 million donated over the years, all dedicated to enrich and inspire our children.”

The event is designed to raise money to assist special needs children and their families with peer mentors and social recreational programs.

Several celebrities who have worked with the company were also on hand to lend their names to the cause. Among them, boxing great Sugar Ray Leonard — who signed on with the company for its ad campaigns in April — Brooke Burke-Charvet, Denise Austin and former Los Angeles Dodgers manager Tommy Lasorda.

Leonard, who attended the event for the first time, said he was inspired to help. “When you say kids to me, I’m there,” he said. “This is my first [time here], but believe me — this will not be my last.”