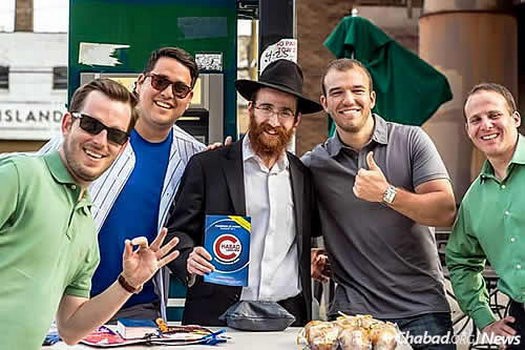 It’s been a pretty difficult century for Chicago Cubs fans; the baseball team hasn’t won the World Series since 1908, the longest championship drought in sports history. But that hasn’t stopped the team’s hardcore fans from cheering—and praying—for a miracle.

Rabbi Dovid Kotlarsky, co-director of Chabad of East Lakeview on Chicago’s North Side, has been there to offer support. Since the beginning of the season, the young rabbi has set up a tefillin stand across the street from the ivy-covered Wrigley Field, encouraging Jewish fans to stop by and say a quick prayer. Judging by the “Loveable Losers’” winning season, the extra supplications seem to be helping.

“We’re right across the street from the stadium, on West Addison near the Starbucks,” says Kotlarsky, who moved to the area in February with his wife,Devorah Leah. “We’re seeing a lot more people coming by now during the playoffs. People are telling us that we’re now a part of their pre-game ritual.”

Dedicated and ritualistic fans that they are, Cubbie devotees have taken notice of the chance to pray for their team, as have the Chicago Tribune, WBBM Newsradio Chicago and Yahoo! Sports.

“Outside of Wrigley Field, a Hasidic Jew tried to wrap me in tefillin,”tweeted Yahoo! Sports’ Jeff Passan to his 131,000 followers. “‘It’s for the Cubs!’ he said. ‘They need every blessing they can get.’ ”

‘A Feeling of Excitement’

“People don’t believe this is real,” explains Jay Sandler, 33, a Cubs fan who knows both Kotlarsky and Rabbi Baruch Hertz, Kotlarsky’s father-in-law who first founded Chabad of East Lakeview more than a decade ago, and has been engaging Jewish fans around Wrigley for years.

“There’s a level of excitement here that I haven’t seen in 10 years, but at the same time people don’t want to hope too much.

“The tefillin stand is incredible to see. Thousands of fans go by, and there’s a feeling of excitement about it. Since Cubs fans are so ritualistic, I think if they did it before and the Cubs won, they’ll certainly do it again.”

Sandler’s assessment seems to be spot on. Here’s a sample email the rabbi has received:

I wanted to say thank you for helping the Cubs win again last night!!

… It was great to meet you. You’re officially part of my pregame plan so I’ll see you next week.

While Kotlarsky is careful not to claim that tefillin will cause the Cubs to win the National League Championship Series and play in the World Series—it would be there first appearance in the Fall Classic since 1945—he doesn’t deny that it could help.

The Cubs, who dropped the first two games in New York, play the Mets at home on Tuesday night.

“Is G‑d a Cubs fan?” Kotlarsky was asked by WBBM’s Terry Keshner.

“G‑d is a fan of doing things that will make more people happy,” responded the rabbi. “I think there’s a lot of good people in Chicago who should be happy; that’s what we’re thinking about right now.”