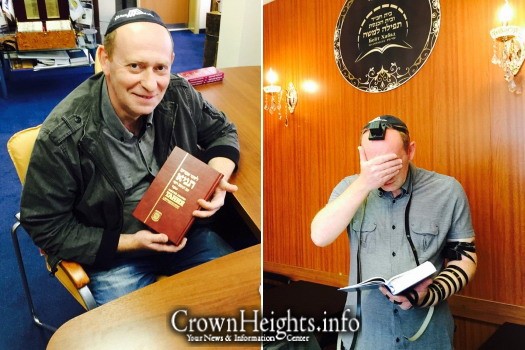 The Shaarei Tzedek Chessed Center in Moscow, Russia, takes care of the physical needs of local elderly and needy Jews day in and day out, by providing them with food, clothing, medicine and more.

Just as often, the center caters to their spiritual needs as well, with a state-of-the-art synagogue in the heart of the newly-renovated complex. The Shul hosts daily Minyanim, Shiurim and the opportunity for male patrons to put on Tefilin – many for the first time in their lives.

Recently, a 50-year-old man who arrived at the center agreed to put on Tefilin, saying that it would be the first time doing so in his life. Despite his proud Jewish identity, the man had come of age during the communist regime, and was never given the opportunity to celebrate his Bar Mitzvah and put on Tefilin.

The Shluchim operating at the center were intrigued when they discovered the man’s last name – Schneerson. The man proudly explained that he descends from a line of great rabbis spanning several generations.

After explaining to him that he almost certainly descends from the Alter Rebbe – Rabbi Schneur Zalman of Liadi – the Shluchim gifted the man a Tanya with Russian translation.

After he put on Tefilin for the first time in his life, they all celebrated the Bar Mitzvah long denied to him with joyous singing and dancing.