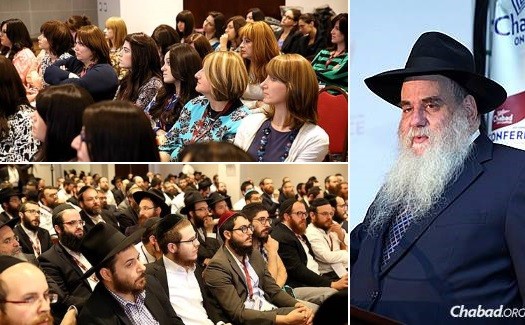 Summer is a good time for many Chabad-Lubavitch emissaries, especially those based on college campuses, to get outside of their immediate surroundings—spending time with family, working with kids at camp, visiting friends or alumni. While the students are away, they also immerse themselves in planning and preparing for the upcoming year’s Jewish holidays, events and programs.

It’s also the right time for the annual Chabad on Campus Kinus, where emissary couples from 230 Chabad on Campus centers worldwide, serving some 500 different colleges, come together for three days of education, networking and the chance to savor time with like-minded colleagues. Also heralded at the conference last month were 20 new couples going out on shlichus, either to start a brand-new Chabad House at a university that has none or to join existing emissaries on a campus that has experienced significant growth over time.

This year, the group gathered at the Crowne Plaza in Stamford, Conn., for programs and lectures that ranged from managing finances and keeping students engaged to modern-day dilemmas of Jewish law and the issues that crop up when spouses work closely together. Other topics touched upon classes and Torah study, Shabbat dinners, holiday programs and social events, and simply being there for students, whatever their needs may be.

Rabbi Shmuel Tiechtel, director of Chabad at Arizona State University in Tempe, Ariz., put it this way: “The Kinus is a chance to rejuvenate, learn, spend time with friends and attend workshops that prompt new ideas for programs to take back home.”

He spoke during an event and seminar targeted for emissaries in their earl years just starting out. Along those lines, he discussed how to set up a Chabad House, stay organized and make each day as productive as possible. “It was eye-opening to see the excited passion of the new shluchim,” he said. “And seeing the extensive network of Chabad on Campus, you realize how great the effect is.”

“The Kinus represents an opportunity for Chabad-Lubavitch emissary families to gain support and advice from one another, as well as to learn from their collective experiences,” stated Rabbi Yossy Gordon, executive vice president of Chabad on Campus International. “Everyone needs time to re-evaluate, and to hear about others’ progress and successes, so that they can go forward with the tools they need to strengthen and grow Jewish life on college campuses everywhere.”

Rabbi Isser and Mushka Kluwgant are heading out in time for the start of the new school year. They will run programs at Pierce College in Los Angeles, a school with a Jewish student body of about 2,000 men and women.

“As a yeshivah bochur,” said the 25-year-old rabbi, “I spent time on campus, a few different ones, and I really loved it.”

So far, the native of Melbourne, Australia, has been learning one-on-one with students and starting to gather together those who might want to be part of a Jewish student group.

He attended the Kinus to meet other emissaries and learn from the experts: “It was good information, but more than anything, they raised a lot of issues that gave me clarity, issues I have to think about—a lot of food for thought.”

One of his favorite talks was on the ins and outs of programming, he recalled, when the presenter spoke about the importance of stopping to contemplate why a particular event or class is being held. “Your goal is to build a community on campus for students,” he said. “You want to change the campus culture, and you want to meet people.” As such, it’s crucial to determine which ways to do so are most effective.

Kluwgant decided at the last minute to attend the event—his wife had a baby just a few weeks beforehand—and flew in for the first night, a Sunday. He spent Monday and Tuesday soaking up the know-how and advice, he said. He also met a group of first-time emissaries he plans to be in touch with as they all move ahead with their work.

The rabbi left Wednesday morning after attending a lecture about fundraising and a farbrengen, making a point to note the benefits of a resource fair that showcased different tools for emissaries. The time there, he said, represented “an opportunity to meet the experts, learn from them and get their numbers—asking if I can call them throughout the year.”

“Everyone’s accessible there,” he said, noting that he hopes to go again next year.

“Although the Kinus has grown 500 percent in the past 10 years, the feeling of camaraderie and family only gets stronger,” said Rabbi Moshe C. Dubrowski, director of programming for Chabad on Campus International. “The power of Chabad on Campus is that every shaliach and shlucha—some coming from as far away as Europe and South America—has brothers and sisters supporting them in tangible and intangible ways.

For the Youngest Sector

Meanwhile, the children of campus couples had a chance to spend time with their peers as well. After all, even the youngest members of these families are emissaries in their own right.

“Growing up on campus is unique; it’s different than a typical Chabad House,” explained Rabbi Mendy Shanowitz, director of MyShliach, a program run by Merkos 302 that provides year-round programming and resources for young shluchim. The children grow up with college-aged students around all the time, he said, and not many other young kids like themselves. Many of the students become like family over the course of four years, but upon graduation, they leave—and completely new people arrive.

The MyShliach camp program, which operated in partnership with Chabad on Campus International and took place as the adults convened for their conference, drew more than 300 kids in its fourth year of operation. It offered local trips to places like the Palisades Climb Adventure Ropes Course and the Sportime USA Funplex. Fathers and sons took part in a learning session on Monday night, and the next day, the boys performed mivtzoim in the Palisades Center Mall in West Nyack, N.Y. Activities for girls included an international-themed carnival, crafts, juggling and a children’s rally.

Boys and girls ages 7 and up also participated in a session led by renowned scholar and lecturer Rabbi Manis Friedman, where they could ask questions based on their experiences in different Jewish communities throughout the world. The entire camp, emphasized Shanowitz, is centered on their roles as junior emissaries, where they, too, can talk about life on campus.

He also noted that over the course of the academic year, “numerous mini-camps and Shabbatons are run for the children of shluchim,” so they can share their experiences, spend time in similar company, and get the opportunity to learn and grow from one another.

‘Looking Out for Each Other’

Rabbi Mendel Deitsch, 25, the emerging co-director of Chabad at George Mason University in Fairfax, Va., with his wife, Raizel, said his friends encouraged him to attend the Kinus, where he wound up enjoying the diversity of presentations.

“It was nice to see how everybody came with their own talents and perspectives,” he said, adding that he also appreciated hearing how Chabad-Lubavitch emissaries learned from their mistakes.

Deitsch said he came away with information on having a sound financial plan, staying organized, and how to build relationships with students and faculty. He’s also excited about the mentor program, where emissaries get paired with one another for advice and interaction on matters that arise during the academic year.

Besides meeting people, he said he really valued the family feel, and the eagerness in which participants shared their knowledge and experiences.

“Everybody’s looking out for each other; everyone’s helping each other. That’s a really powerful feeling, especially for someone like me just starting out.”