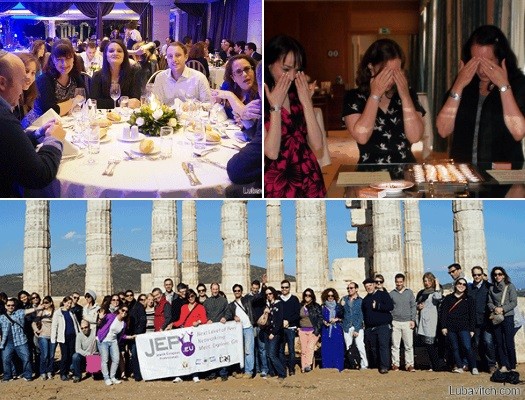 Pamela Kandil and David Danciger’s “Meet Cute” is a jet-setting tale of Jewish dating with a uniquely European flair. Seated next to each other at a Jewish networking conference in Bratislava, Slovakia, the couple began a whirlwind courtship in the UK followed by a romantic proposal on a gondola in Venice, Italy.

One of the more interesting discoveries they made during their courtship was that they lived just ten minutes away from each other in the tight-knit Jewish community of Hendon, a London suburb.

“In Hendon, I grew up with all the Jews in the area and I got to know everyone pretty well. They made up my group of friends,” Pamela, a 31 year old electrical engineer, explains. “You tend not to date your friends, so when I started dating I went on a lot of trips to Israel and America through different Jewish organizations.” Pamela knew she would like to marry someone who wanted to keep a kosher home and observe Shabbat with her, but she wasn’t finding Mr. Right.

It’s a frustration familiar to thousands of young Jewish singles in their late twenties and thirties wishing to find a Jewish spouse. And, with 71.5% of non-orthodox American Jews marrying outside the faith, as revealed by a recent Pew study, some would argue that the issue has reached crisis proportions, challenging Jewish organizations to respond.

Chabad representatives are putting their own worldwide networking capabilities to work, facilitating meetings between eligible men and women. In Europe, where the problem is exacerbated by a small and widely dispersed Jewish population, Rabbi Zevi and Sara Ives were approached by a number of singles who complained that they were having difficulty “meeting eligible Jews seeking a serious relationship.” In response, the Iveses, who live in Brussels, Belgium, launched the Jewish European Professionals (JEP), providing social networking events and getaways for Jewish singles.

Since opening in 2012, JEP introduced hundreds of Jewish singles. A dozen of them were married or are engaged to be married, among them, Pamela, who joined JEP on a trip to Malta in 2012. On her third trip to Bratislava in May 2013, she met her husband David. An IT administrator, David, 36, joined the event as a way to widen his social circle and meet his soulmate. The London native explains that “there’s only a limited number of events and organizations in London. You tend to start seeing the same people all the time.”

When he sat down next to Pamela at the Shabbat dinner on Friday night, David was surprised to discover that they both lived in Hendon. Though the young Jewish community there is rather small, their paths never crossed: Pamela, who is of Sephardic background, and David, an Ashkenazi Jew, belonged to different congregations. The two spent the weekend talking, and on the flight back to England, David offered Pamela a ride back from the airport. A budding relationship quickly developed and they were married by a rabbi this past September.

According to statistics, Pamela and David’s children will have a very high likelihood of marrying Jewish. Studies show that individuals raised by two Jewish parents are more likely to identify with Jewish tradition and be actively engaged in all aspects of Jewish life. Those born to parents of different faiths have a much slimmer chance of growing up committed to Jewish life; indeed, only 17% of children from interfaith marriages marry Jewish. “We cannot sit by indifferently as we continue to lose Jews,” says Sara Ives. “It is possible to turn the tide. Not easy, but possible.”

With centers in major cities and countries worldwide, Chabad representatives—especially in places like the Former Soviet Union and Brazil—where the in-marriage rate is a low 20-40% respectively—are working creatively to turn th e tide. Often this means educating Jews so that when considering marriage, a Jewish spouse will be at the top of their priority list.

In S. Paulo, with a Jewish population of 60,000, Chabad’s educational programs for the city’s least affiliated Jewish teenagers includes tours of American and Israeli Jewish communities where they get to see observant Jewish families. In Dneprodzerzhinsk, Ukraine, a new initiative, “Shiurei Torah Lubavitch” or STL, is connecting Jewish singles through recreational retreats.

“We have other programs to encourage Judaic learning and traditions,” explains Chabad representative to Dneprodzerzhinsk, Dina Stambler. “But the goal of this program is specifically for Jews to meet and interact with one another.” Though less than a year old, the program has already resulted in many Jewish marriages.

Although optimistic, Stambler is not oblivious to the huge challenges she’s up against. “Many of the locals don’t recognize the value of marrying a Jew—they don’t see it as important. I have to explain to them their responsibility in terms of a larger Jewish collective and try to create an understanding of what it means to be part of a global and eternal people. “I remind them that the reason we are here, in the middle of Ukraine, at a Shabbat table celebrating our age-old traditions is because the generations before us married Jewish.” In Europe, where the Ives encounter many participants in their programs who don’t necessarily prioritize marrying Jewish, they’ve settled on a different approach, allowing the experience of Jewish fraternity to speak for them.

“We don’t argue the case for marrying Jewish,” says Sara. “We found that many of our participants never realized that Judaism was even important to them. After experiencing an immersive weekend of Judaism— kiddush on Friday night, the unique camaraderie and background Jews share—they notice a distinct connection between Jewish people, and it resonates with them. Having them come to this realization on their own is more effective than arguing any case.” On some 210 college campuses in the United States and abroad, Chabad representatives also invest heavily in Jewish study offerings as a means to promote Jewish marriages.

“If your version of Judaism is matzaball soup, why would you have any interest in marrying a Jew?” asks Shifra Sharfstein, Chabad representative at Georgia Tech University. Parents of these uninterested students often turn to her in despair asking that Chabad step in and convince their child to marry a Jew. “The most effective way of combating this issue would of course have been to instill a sense of Jewish pride during their youth.” Short of that, Sharfstein provides students with enriching Torah study opportunities.

Yehudis Bluming, Chabad representative to Duke University, has been taking a group of students to Israel since 2007. The excursions, she says, “give students a good idea of who they are and where they come from. They return to campus invigorated and want to celebrate their Judaism in a more passionate and joyful way.

“Some decide to commit themselves to Jewish customs like Shabbat or kosher. Sometimes, the result is that Judaism becomes central to their lives, and they’ll choose to live it on a day to day basis,” and marrying Jewish becomes a matter of course.

Bluming tells of a couple that met on IsraeLinks who were both inspired to turn their minimal Jewish cultural identity into a knowledgeable one, and eventually got married. “They now work with the Chabad rabbi on campus in their hometown—a full circle.”

Rabbi Yisroel Bernath moved to Montreal, Canada about 10 years ago to direct Chabad of NDG and Loyola Campus. He quickly established a natural rapport with young, single, secular Jews.

“I had a lot of people come up to me and say ‘Oh, I know everyone and there are no Jews in Montreal,’ ” Bernath says. “I had just moved there but even I knew there were a lot of Jewish singles. (Montreal’s Jewish single population ages 20-39 numbers about 20,000.) So I started setting people up unofficially.”

After dozens of successful introductions, Bernath was deluged with requests for his matchmaking expertise and he started looking for a database that would allow him to store people’s information to streamline the matchmaking process. He ended up meeting Marc Goldmann, the CEO of SawYouAtSinai.com, who suggested that he start his own local matchmaking website and thus JMontreal.com was born. The website, limited to Montreal residents, is a discreet, personalized introduction service for marriage- minded Jews that uses a network of 15 volunteer matchmakers.

Since JMontreal’s launch five years ago, the website has set up nearly 1,500 first dates. Bernath, who has been labeled the “Love Rabbi” by local press, gauges his success in first dates, but the many weddings he attends every year are evidence that the formula is working. The successful initiative has spread throughout Chabad’s network and similar websites, JToronto, JChicago, JHouston, JDallas, etc. have sprung up across North America.

While the sites focus on finding matches for Jews in the same city, “the back end is all connected, so we can connect Jews between all the participating cities,” Bernath says.

Severine Cohen, a 33-year-old lawyer, signed up for JMontreal in 2012. She enjoyed the fact that the website, while intended for Jewish singles, is not an “online dating” site like JDate or others, where singles choose potential partners.

“It is not the kind of website where you go and look at the men and you shop around and ask your girlfriends opinions,” she explains. “There’s no public browsing. You first have to meet with a matchmaker and explain what you’re looking for—you don’t get a dozen matches an hour later.” In fact, after turning down a potential match, each participant has to wait two weeks before another is suggested, “which really makes you think twice. You can’t just go ‘Next!’ and click on the next picture.”

In stark contrast to popular dating apps, Cohen says that JMontreal’s thoughtful process was a very positive experience that allowed her to figure out what she was really looking for in a soulmate. The personal touch was important as well.

“On the classic dating websites, you are alone and you can make decisions based on unimportant details,” Cohen explains. “Having a rabbi vouch for the other person, you trust that there is what to go on and you are willing to give someone you maybe never would have considered a chance.”

Cohen didn’t get to use JMontreal for long. A month after signing up, Rabbi Bernath introduced her to a charming young Jewish man. The two will be married in August.

Natalina Gilman was working as a consultant in Zurich, Switzerland, for years before she decided to join a JEP retreat. Born to a traditional Jewish family from Russia who moved to Cologne, Germany, she had limited interactions with Jews growing up, and almost none in her professional life. After attending university in Switzerland she began working and traveling in Europe, where she says she does not recall ever meeting a fellow Jew by coincidence.

With no Jewish colleagues at work or in her social circle, Natalina found dating to be very difficult. She admits that while she preferred to marry Jewish, she would have married a non-Jew, “if I met the perfect one.”

After years of working very hard with no time off for a private or social life, Natalina decided to join a weekend Jewish retreat and “see what happens.” The experience was positive enough to make her try it a second time. That’s when she met Daniel Weiss, an otolaryngology physician who was born and raised by Romanian Jewish parents in Germany. They hit it off and talked all weekend. After the event, they stayed in touch and soon got engaged.

Now, as she excitedly plans her upcoming chuppah in Germany, the woman who once considered marrying outside the faith is trying to figure out the complicated details of getting kosher catering in Germany. Talia, as she likes to be called now by her Jewish name, is proud to be getting married in a religious ceremony and plans to raise her future family with Jewish traditions.